The Janta Curfew has been implemented to fight the spread of the Coronavirus, however, police officers are enforcing it by beating the public with lathis.

"The steps we take now will help in the times to come."

Some police officers have been caught on video beating members of the public with lathis (sticks) in a bid to enforce the Janta Curfew.

Prime Minister Narendra Modi came up with the curfew in a bid to combat the spread of the Coronavirus.

It is essentially a self-curfew in order to test social isolation. The concept was implemented on March 22, 2020.

PM Modi appealed to all citizens to stay indoors from 7 am to 9 pm to reduce the risk of spreading the deadly virus.

He also requested them to stand on balconies and near windows to clap and ring bells to praise the emergency services who are on the frontline fighting against COVID-19.

In a Tweet, PM Modi said: “Let us all be a part of this curfew, which will add tremendous strength to the fight against the COVID-19 menace.

“The steps we take now will help in the times to come.”

The Janta Curfew started off well with roads and public places becoming deserted.

A lot of celebrities lent their support to the initiative, putting out videos and Tweets, asking everybody to follow the Prime Minister’s curfew.

Many people have abided by the rules and have stayed at home. A lot of citizens stood on balconies and cheered for healthcare services.

This led to the hashtag #IndiaComeTogether going viral.

Many people praised citizens for listening to the initiative.

BJP member Major Surendra Poonia posted: “The way India is fighting with Corona is like no other country. More than 1 Billion Ppl coming out of houses & cheering for healthcare workers & every unit of administration.

“UNPRECEDENTED in history of mankind. Big Salute to India’s EVERY citizen.” 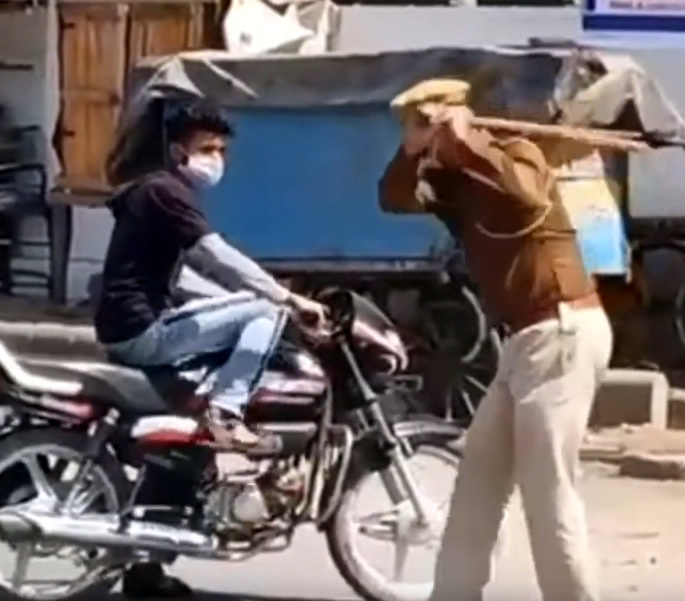 However, not everyone has stuck by the initiative. Some people have been spotted out.

The police are working to ensure that citizens abide by the rules but videos are circulating online of officers taking extreme measures.

Videos show police officers using lathis to threaten and even beat people for being out.

In one instance, several people are seen out on motorcycles on a deserted road. Police officers are demanding them to go home while hitting them with their lathis.

Officers are also seen surrounding one motorcyclist and hitting him across the legs and on the back as he turns around and returns to where he came from.

A video captured two pedestrians being violently hit with lathis and chased off the street.

Although the police are enforcing the Janta Curfew, their methods of doing so are quite violent during a difficult situation.

India has so far recorded 315 cases.

South Asia appears to have been less severely affected than other parts of the world but the rate of new infections has accelerated.

Officials are concerned that the countries will be particularly susceptible to the infection, given the poor health facilities and infrastructure in many areas.

Dhiren is a journalism graduate with a passion for gaming, watching films and sports. He also enjoys cooking from time to time. His motto is to “Live life one day at a time.”
South Asian countries impose COVID-19 Curfews & Possible Lockdowns
Indian Baker creates Cake to Raise COVID-19 Awareness