An Indian wedding took place in Madhya Pradesh, however, extra precautions were taken. Due to the curfew, the wedding went ahead with no pundit.

Instead, an improvised ceremony went ahead.

An Indian wedding went ahead despite the curfew, however, it was without a pundit.

The Coronavirus resulted in a nationwide lockdown with curfews in a bid to stop the spread of the virus. As a result, many social events for citizens have been postponed.

Even weddings have been postponed but some people are finding ways to go ahead with them.

One marriage took place in the town of Shajapur, Madhya Pradesh. It was an improvised ceremony where there were only a few guests and some social distancing. There was also no pundit.

Bhavna got married to Chandan. The newly married couple explained that they had made a lot of preparations but due to COVID-19, their arrangements were ruined.

They were initially upset but they decided to go ahead with the wedding, but with extra precautions.

Bhavna and Chandan took part in some elements of the procession.

Seeing this, both families knew that they could not stop the ceremony. Deciding that the marriage would go ahead, they made sure that necessary adjustments were made so that the curfew was not breached.

Chandan’s baraat procession only had five people and they all kept their distance.

The pundit did not turn up due to the lockdown. Instead, an improvised ceremony went ahead. 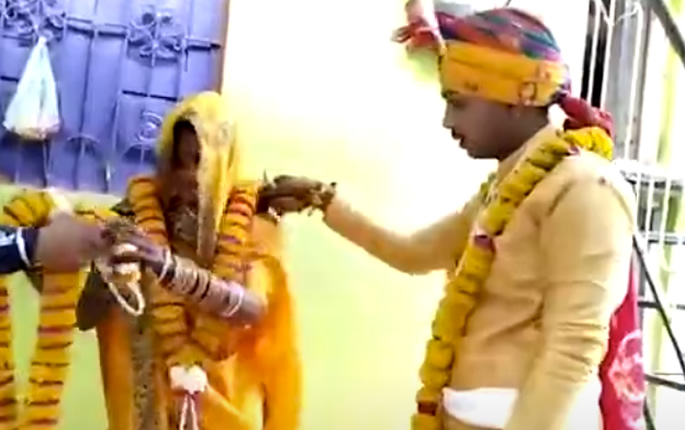 The Indian wedding was very simple, with hardly any elements.

The bride and groom exchanged garlands and there was some social distancing between the couple.

At the wedding, there were only a few guests. Due to Coronavirus, no friends had been invited.

The minimal guests at the wedding then applauded the couple and threw flowers over them.

Following the wedding, the newly married couple urged citizens to abide by the lockdown rules.

In a similar case, a couple from Haryana got married while socially isolating.

On Friday, March 27, 2020, the groom, Pawan had the baraat procession with just five people. They travelled in separate cars to the wedding.

When the wedding was arranged, approximately 500 relatives and friends had been invited but due to the Coronavirus and India’s subsequent lockdown, they had no choice but to reduce the number of guests.

They decided to have a simple wedding instead.

During the wedding ceremony, he and the bride wore masks. Guests were instructed to use hand sanitiser upon entering the venue.

Following the wedding, the small number of guests abided by the social isolation rules by congratulating the newly-married couple from a distance of two metres.

The married couple told their guests to follow the lockdown rules.

Dhiren is a journalism graduate with a passion for gaming, watching films and sports. He also enjoys cooking from time to time. His motto is to “Live life one day at a time.”
NCA warns to Keep Children Safe from Sexual Predators Online
Boxer Amir Khan questions Coronavirus link to 5G conspiracy