"I hail from Mumbai, India. I am an entertainer."

A video of Martin Brundle speaking to Ranveer Singh at the F1 Abu Dhabi Grand Prix has gone viral.

A day after Ranveer won ‘Superstar of the Decade’ at the Filmfare Middle East Achievers Night 2022 in Dubai, the Bollywood star enjoyed the Formula 1 in Abu Dhabi.

The race was won by Max Verstappen.

Celebrities attended the motorsports event and Ranveer was seen dressed in an extravagant Versace ensemble.

It was a gold shirt and trouser combo. He completed the look with oversized sunglasses.

He ended up being part of Martin Brundle’s famous grid walks, where the pundit walks the grid and speaks to various celebrities.

Given that the interviews are unrehearsed and unscripted, they make for entertaining viewing and his conversation with Ranveer was no different.

Despite not knowing who Ranveer is, Martin is eager to meet him.

When meeting Martin, Ranveer was asked to introduce himself.

Ranveer replied: “On top of the world. I can feel the exhilaration and adrenaline.”

Martin then admits to Ranveer that he has “momentarily forgotten” who he is.

“I have momentarily forgotten who you are, can you tell me please.”

Ranveer responded: “I’m a Bollywood actor, sir. I hail from Mumbai, India. I am an entertainer.”

“The respect for that suit! Because that is punching.”

Ranveer then joked: “You know the best part sir, I have to send it all back in the morning.”

The pair enjoyed a laugh before Martin continued with his grid walk.

"Respect for that suit" ?

"You know the best part? I have to send it all back in the morning" ?

Many praised Ranveer for handling the situation well, calling his response “modest” and “humble”.

Another said: “This shows how humble and nice Ranveer is.” Another tweet read, “One has got to respect his humility.”

However, some trolled Martin for not knowing who Ranveer is, with some calling him “embarrassing”.

One said: “A white man who no one knows off, literally living under a rock, questions arguably the biggest Hindi movie star about who he is and you find that funny!

“How lame of you. Respect to Ranveer.”

Despite not knowing who Ranveer was, some Twitter users praised his attitude.

One person, who pointed out that some celebrities are rude to Martin Brundle when he tries to speak to them, said:

“No idea who he is either but he was genuinely excited, pleasant and respectful which is more that can be said about some of the ‘celebrities’ he tries to speak to.”

“I’ve no idea who he is either but I love his humble attitude. Seemed a lovely bloke!”

Some defended the F1 pundit, with one mentioning an incident between Maria Sharapova and Sachin Tendulkar.

The user wrote: “Nothing wrong with it actually. Same as Maria Sharapova not knowing who Sachin was few years back.”

At the Grand Prix, Ranveer Singh also enjoyed some time with singer Akon. The pair danced and sang to ‘Chammak Challo’.

When the Icons meet, magic is bound to happen! 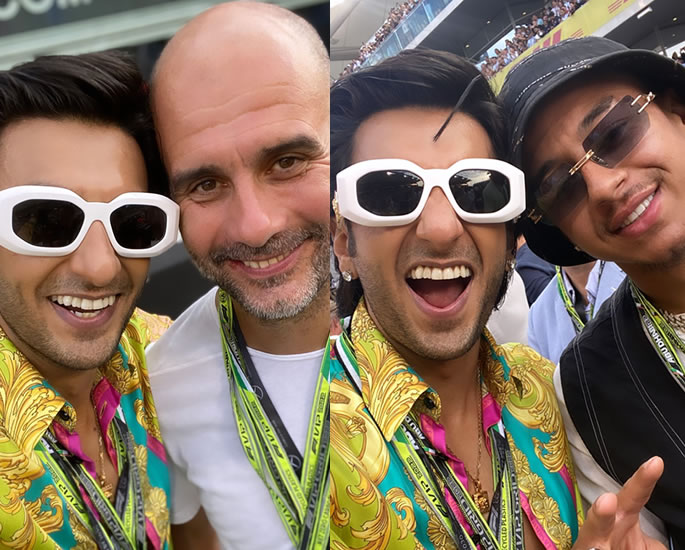 On the work front, Ranveer was last seen in Jayeshbhai Jordaar.

He will be seen in Rohit Shetty’s Cirkus alongside Jacqueline Fernandez, Pooja Hegde, Varun Sharma and Johnny Lever.

Dhiren is a journalism graduate with a passion for gaming, watching films and sports. He also enjoys cooking from time to time. His motto is to “Live life one day at a time.”
8 Top Toughest Sports in the World
Indian World Cup Fans Fuming with JioCinema Stream