A teenage Indian student has been accused of stabbing and killing her mother who tried to stop her eloping with a ‘boyfriend’ she met on Facebook.

"Devipriya had told her Facebook love story to her mother Banumathi"

A 19-year-old Indian college student, S Devipriya, allegedly stabbed her mother to death with a kitchen knife after she tried to stop her eloping with her ‘boyfriend’, S Suresh, who she met on Facebook.

Tamil Nadu police arrested the Devipriya, S Suresh and two other teenagers aged 16 and 17 in connection with the tragic incident.

The fatal stabbing took place in the Thiruvallur district of Tamil Nadu in India on Monday, December 24, 2018.

Devipriya, a second year Bachelor of Commerce college student, was confronted by her 50-year-old mother, Banumathi, when she saw her daughter packing her bags and planning to elope with her the boyfriend she had met on social media.

“Devipriya had befriended S Suresh, who is also 19-years-old and a resident of Kumbakonam, Thanjavur district, last year through Facebook.

“Though they had not met in person, they had developed a strong relationship through Facebook.

“Suresh had claimed to be an IT professional in Mysuru.

“Devipriya had told her Facebook love story to her mother Banumathi, who had advised her to disbelieve Facebook love proposals and to concentrate on her studies.”

Upon finding out what her daughter was up to Banumathi confiscated her phone and restricted its use.

Devipriya was not pleased and reacted to it badly, as police explained, saying:

“Angry at this, Devipriya managed to call Suresh and sought his help in killing her mother.

“Suresh, in turn, sent two school dropouts, both minors aged 16 and 17, to help Devipriya execute the deed on Monday.”

In a premeditated plan, Devipriya introduced the two other teenagers to her mother as her friends. She then attacked her mother in front of the other two young men. Police described what took place saying:

“As she was packing her bag, her mother Banumathi learnt that she was leaving the house and stopped her.

“In a fit of rage, Devi picked up a kitchen knife and stabbed her mother in the presence of the two men.”

Her mother’s screams during the attack alerted the neighbours, who gave chase to the two teenagers, who flee from the house but were spotted with blood stains on their shirts and caught.

When police and the ambulance arrived at the scene, Devipriya was questioned and arrested by a women police officer. 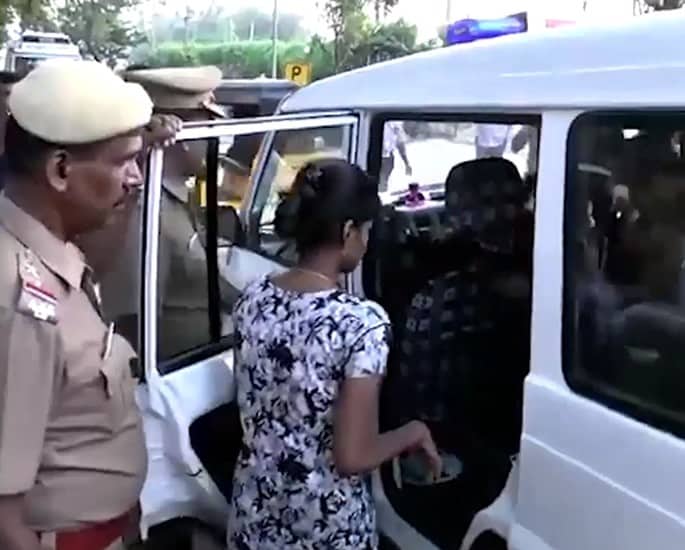 Her mother was taken by the paramedics to the hospital.

The two teenage men caught by neighbours were arrested as well.

During the interrogation of the two young men, they confessed to their part in the killing and revealed details about Suresh, which led to his arrest on Tuesday, December 25, 2018.

Further investigations by police revealed that Suresh the ‘boyfriend’ was in fact not an IT professional as he told Devpriya in their communications on Facebook but worked in a garment factory. Police said:

“He was working at a factory in Sri City of Andhra Pradesh.

“He had lied to Devipriya about his background to make her fall in love with him.”

Devipriya and Suresh appeared in front of the city court and then detained in police custody, thereafter.

The love-smitten Devipriya was living with her parents Sivagurunathan, her father, Banumathy, her late mother, and her sister Chamundeswari, when she met Suresh on Facebook.

Nazhat is an ambitious 'Desi' woman with interests in news and lifestyle. As a writer with a determined journalistic flair, she firmly believes in the motto "an investment in knowledge pays the best interest," by Benjamin Franklin.
Indian Doctor kept Ex-Wife ‘Alive’ on Facebook after Killing Her
Indian Woman chops off Stalker’s Genitals ‘to Teach Him a Lesson’