Indian Girl Beaten in front of Father for Eloping with Man

In a shocking incident, a 16-year-old Indian girl from Gujarat was beaten for eloping with a man. The assault happened in front of her father.

"She was thrashed as a punishment by these accused"

An Indian girl was brutally beaten by three men in front of her father as a “punishment” for eloping with a man.

The shocking incident took place in the remote village of Bilvant in Gujarat’s Chhota Udepur district.

Footage of the attack appeared on social media. It showed the defenceless teenager screaming in pain as she is dragged by her hair and repeatedly hit by the three men while a crowd gathered around to watch.

According to police, the attackers inflicted the beatings as a form of punishment.

The girl and the man allegedly eloped to Madhya Pradesh. When she returned, villagers were angered and beat her.

It was reported that the video surfaced on May 27, 2020, attracting the attention of the police, however, it is believed that the attack happened on May 21.

Police said: “The girl had eloped with a man and went to a village in neighbouring Madhya Pradesh.

“She was thrashed as a punishment by these accused upon her return a few days back.”

Deputy Superintendent of Police AV Katkad said that the three attackers felt their attack was justified as they believed that by eloping with the man, she had brought “disrespect to their community”.

It is believed that the video was recorded by a villager on a mobile phone.

The footage showed one man hitting the Indian girl with a stick while another pins her arms down, leaving the victim unable to defend herself.

The other two men repeatedly punch her in the face and back, knocking her to the ground. 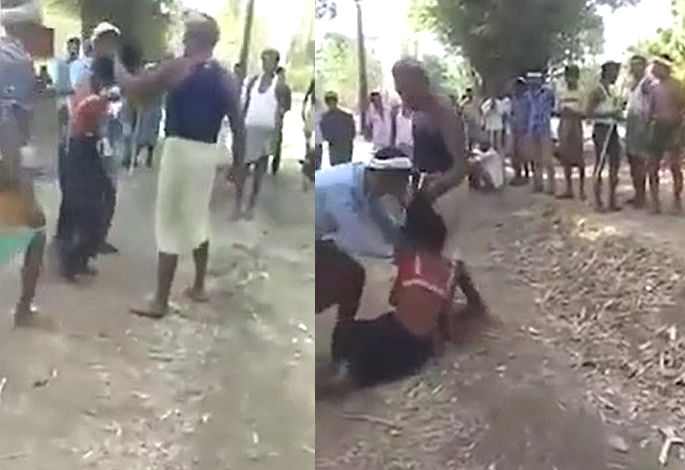 They also ripped her saree from her shoulders while continuing to beat her.

Police said that the victim’s father was forced to watch the horrific assault being inflicted on his daughter.

It was reported that some of the men seen in the video were her relatives. Superintendent of Police MS Bhabhor said:

“The video is of an incident that occurred a few days ago where a 16-year-old girl was publicly flogged by villagers for eloping with a man of the same village.

“The older man seen in the video has been identified as the girl’s uncle.”

Following the beating, the father filed a complaint at Rangpur Police Station.

All 16 men have been booked on charges of rioting, criminal intimidation, assault and various sections of the Protection of Children from Sexual Offences Act.

SP Bhabhor added: “We are currently lodging an FIR against three who were seen assaulting the minor in the video while the roles of rest of the people are being probed.

“Currently, sections of rioting are going to be imposed on them.”

Efforts are currently being made to arrest the accused.

Dhiren is a journalism graduate with a passion for gaming, watching films and sports. He also enjoys cooking from time to time. His motto is to “Live life one day at a time.”
Boxer Amir Khan reunites with Parents & Introduces Son
Man jailed for Mowing Down & Hitting Victim with a Crowbar