Man jailed for Mowing Down & Hitting Victim with a Crowbar

A man from Bolton has received a prison sentence for violently attacking his victim with a crowbar after deliberately running him over.

"You got into your vehicle and drove deliberately at your victim"

Aqeel Ahmed, aged 24, of Bolton, was jailed for four years after he hit the victim with a crowbar following a fight on a petrol station forecourt.

The victim had already been unconscious when he was struck with the metal bar as Ahmed had deliberately ran him over with his car.

Manchester Crown Court heard that Ahmed had met the victim to sell drugs to him.

Duncan Wilcock, prosecuting, said, that the incident happened in Cheetham Hill just after 2 pm on February 25, 2020.

He said: “Some form of agreement had been made for the complainant to buy cannabis from the defendant and it is for that reason he says he attended the petrol station.”

However, Ahmed began to call the victim names and “a scuffle broke out between the two males”.

The victim said he does not remember anything other than being hit over the head with a crowbar and waking up in hospital.

However, CCTV footage captured the incident at the Esso garage.

It showed Ahmed arriving in a VW Touran and entering the shop. He then left and confronted the victim outside.

Following the row, Ahmed got into his car and drove. However, he turned around and drove deliberately at the victim, causing him to be thrown on the bonnet.

Ahmed drove for a short distance before “stopping suddenly”, causing the man to be thrown off the bonnet and into another car before landing on the ground.

The victim was unconscious, however, Ahmed then stamped on him at least twice before a bystander stopped him. Ahmed managed to break free and hit the victim over the head with a crowbar he had picked up.

Police and paramedics arrived shortly afterwards and Ahmed was arrested at the scene.

The victim escaped with minor injuries, including a graze to his elbow and a cut to his head. However, a victim impact statement revealed he still suffers some after-effects. 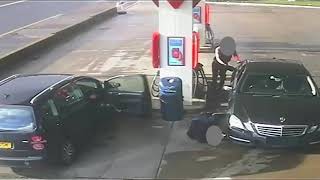 Ahmed pleaded guilty to attempting to cause grievous bodily harm with intent, possession of an offensive weapon, dangerous driving and drink driving.

Hugh Barton, defending, said: “There are essentially two parts to this incident.

The first part is very unclear but there was some kind of two-way scuffle. It is not clear who initiated that or what has ultimately led to their fall out.

“He (Ahmed) has gone to drive away and the victim chases after his car.

“It is that point he reverses his vehicle towards the victim and then begins what is obviously a very serious and sustained assault.

“The red mist had descended.”

Mr Barton went on to say that Ahmed had recently lost his father and was suffering from low mood. He also spoke about a character reference from boxer Amir Khan about the voluntary work Ahmed had done for his foundation.

“You got into your vehicle and drove deliberately at your victim at speed, causing him to go onto the bonnet.

“You drove for a short distance and then stopped suddenly causing him to be thrown off and towards the tyre area of another car on the forecourt.

“You stamped on his head several times.

“You had to be restrained by a courageous member of the public. You then came back and tried to inflict more violence.

“Whatever happened beforehand this was a terrible display of violence and you used your vehicle as a weapon as well as the crowbar.

“It is fortunate, in fact miraculous, his injuries were not more serious.

“However they were serious enough that he still suffers as a result of this attack.”

“This was protracted, prolonged period of violence and was very determined on your part.”

On May 28, 2020, Ahmed was jailed for four years. He was also banned from driving for two years which will begin upon his release.

Afterwards, Detective Constable Terry Macmillan said: “This was an unrelenting attack on a man who Ahmed didn’t even know, that could have caused life-threatening injuries.

“If it wasn’t for the bravery of the man who restrained Ahmed and other members of the public who quickly called police, his victim may not have survived.

“I would like to thank them for their quick-thinking actions that day.

“Ahmed’s attack was senseless and brutal, but thankfully CCTV footage of the events leading up to and after the assault has significantly helped to put this violent man behind bars.”

Dhiren is a journalism graduate with a passion for gaming, watching films and sports. He also enjoys cooking from time to time. His motto is to “Live life one day at a time.”
Indian Girl Beaten in front of Father for Eloping with Man
TikTok Video reunites Indian Man with Family