An Indian man from Telangana has been reunited with his family after being missing since 2018. He was found thanks to a TikTok video.

An Indian man has been reunited with his family after more than two years thanks to a TikTok video posted by a police officer.

Roddam Venkateshwarlu worked as a labourer. He went missing in April 2018 after leaving his home village in Telangana for work.

He had got on a truck to go to a different village for work, however, he fell asleep in the back of it.

Roddam, who has hearing and speech difficulties, encountered a series of mishaps which included being stranded in the middle of the road and hitchhiking on a vehicle that ended up going in the opposite direction.

His son, R Peddiraju, said: “My father fell asleep and the truck driver didn’t know he was there.

“Several kilometres later, the driver realised my father was in the truck and so he dropped him off on the middle of the road and left him there.”

He ended up in Ludhiana, Punjab, which is more than 1,200 miles away. Since then, Roddam had been living off food donations.

His disappearance left his wife and five children at a loss.

They filed a missing persons’ complaint but there was never any lead until March 2020.

Ludhiana police constable Ajaib Singh uploaded a TikTok video of him donating food to a man. A family friend saw the video and recognised the Indian man.

Constable Singh regularly uploads to TikTok. His 800,000 followers watch videos of him helping the vulnerable in the community.

The friend then informed the family who got in touch with the police. 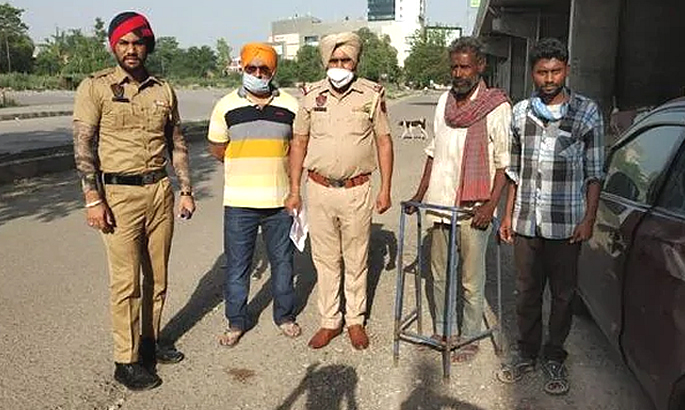 Officers tracked down Roddam and managed to let the father talk to his son over video chat.

“We both burst into tears when we first saw each other. He asked me to come and take him home, signalling in his own way.”

India’s lockdown has seen flights, trains and other means of transport suspended.

The family had to wait a little while for their reunion but Peddiraju was able to obtain a permit to travel across the states.

In May 2020, Peddiraju saw his father for the first time in two years. Both were reunited with the rest of the family on May 26 when they returned to their home village.

Peddiraju said: “This is the first time that our father stayed away from us for this long. He lived only on rotis for the last two years, which he was not used to.

“The first thing we’ll do now is feed him homemade hot rice.”

Dhiren is a journalism graduate with a passion for gaming, watching films and sports. He also enjoys cooking from time to time. His motto is to “Live life one day at a time.”
Man jailed for Mowing Down & Hitting Victim with a Crowbar
Studying Tips in a Desi Household for Lockdown