Raheem Raha and Julian Bennett have both been jailed for their part in a boy racers incident where Raha seriously crashed head-on into an oncoming car.

"I have to reflect the harm that was caused"

Boy racers Raheem Raha, aged 22 and Julian Bennett, aged 20 have been both jailed for a collision which involved one of them hitting an oncoming car with a father and son inside, head on.

The crash happened as both were racing on a public road in Salford and one of them was trying to overtake the other on the wrong side of the road.

The car which was hit head-on left the driver, a father with many injuries and his 12-year-old passenger son traumatised and with a broken wrist.

The hearing in Manchester Crown Court heard how the racers got involved in the crash.

Raha and Bennet were at a friend’s house and were planning to go to a shisha bar later that night in Manchester on January 31, 2018.

Bennet, from Warrington, had stopped to fill his black Vauxhall Astra with petrol.

Raha, from Bolton, was driving a silver Vauxhall Vectra down Liverpool Road in Irlam, Manchester, just after 9.00 pm.

Bennet then approached towards him in his car and they then both began to race each other on Liverpool Road.

Prosecutor Denise Fitzpatrick told the court that the road had speed limits which varied from 30mph to a 50mph limit further ahead.

On the single carriageway part of the road which had a speed limit of 50mph, Raja then tried to overtake Bennet, which meant he was manoeuvring onto the wrong side of the Liverpool Road.

Reacting, Bennet moved ‘side to side’ with the aim to block Raha from overtaking him.

A Ford Mondeo car was being driven on the right side of the road by the father with his son as the passenger at the back.

As it was approaching the racers, Raha crashed into the Mondeo while being on the wrong side of the road.

The crash immediately sent the Mondeo into a spin and it halted by a verge nearby and Raha’s car was hit head-on.

Bennet stopped his car when police were seen arriving at the crash scene.

Police described the collision as a ‘high speed’ crash because they could not calculate the speed Raha was doing at the time.

The victim driver in the Mondeo was trapped initially and then taken to Salford Royal hospital where he was diagnosed with an injury to the heart, bruising behind the sternum, four fractured ribs, bruising to the right lung, a dislocated and fractured hip which needed surgery.

He spent three weeks in hospital and needed another two operations with injuries resulting in his partner taking three months unpaid leave from work to look after him. 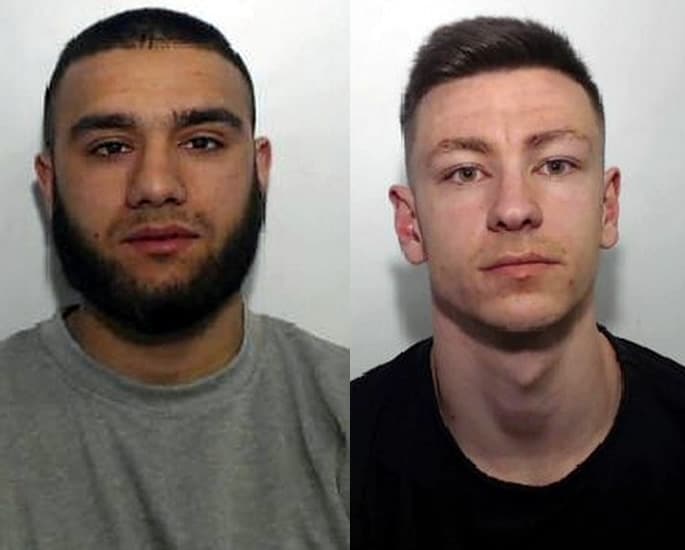 In the police interview, Raha replied ‘no comment’ to questions apart from admitting he was driving his car. Bennet said he knew Raha but denied dangerous driving.

Ben Kaufman, Raha’s lawyer, said he wanted to take ‘full responsibility for his actions’. Adding that he was genuinely remorseful and ‘devastated’ to learn about the victim’s injuries.

He said Raha, a trainee mechanic, was to have an arranged marriage later on in 2019, ‘borne out of a determination to find a new level of maturity in his life’.

This was a result of a trip to Pakistan with his mother to reflect on the incident.

Both of the defendants did eventually plead guilty to one count of causing serious injury by dangerous driving under the joint enterprise law.

The barristers of the boy racers did request the judge to suspend any potential jail sentences.

“I know you are both sorry for what happened but you and others like you must learn that actions have consequences and that a motor car in the wrong hands can be a lethal weapon.”

With the seriousness of the offence, Judge Conrad disregarded the request of the barristers and felt prison was appropriate for the pair after this ‘terrible accident’, reported Manchester Evening News.

“You are both young men from good and supportive families.

“Both young men with good qualities, of whom many people have spoken well.

“If it were just you I had to consider that would be one thing. But I have to reflect the harm that was caused.”

Raha was jailed for 14 months and Bennet for 15 months of detention in a young offenders’ institution.

In addition, they were both banned from driving for three years and seven months by the judge.

Nazhat is an ambitious 'Desi' woman with interests in news and lifestyle. As a writer with a determined journalistic flair, she firmly believes in the motto "an investment in knowledge pays the best interest," by Benjamin Franklin.
Indian Love Marriage Bride ‘kills herself’ over Dowry
Drug Dealer jailed after Cocaine found in Ex-Partner’s Bra