Bumble has made several updates to its platform.

Dating apps such as Bumble have added language badges to their platforms to help users showcase which languages they can speak on their profiles.

Alongside Bumble, the likes of Aisle and Neetho have also added language badges.

In a statement issued by Bumble, it was revealed that singletons can now select up to five badges from over 100 global languages and over 30 languages in India.

According to an internal study by Bumble, people who have added at least one language badge witnessed a 34% increase in their matches than those who have not.

Since the launch in India, the top five most widely used language badges on Bumble profiles are English, Hindi, Marathi, Punjabi and Tamil.

“With the launch of Language Badges, single Indians will now be able to showcase their language preferences and communicate more easily with their potential matches.

“This is another way in which Bumble continues to offer single Indians opportunities to find people they are most compatible with, to make more meaningful connections.” 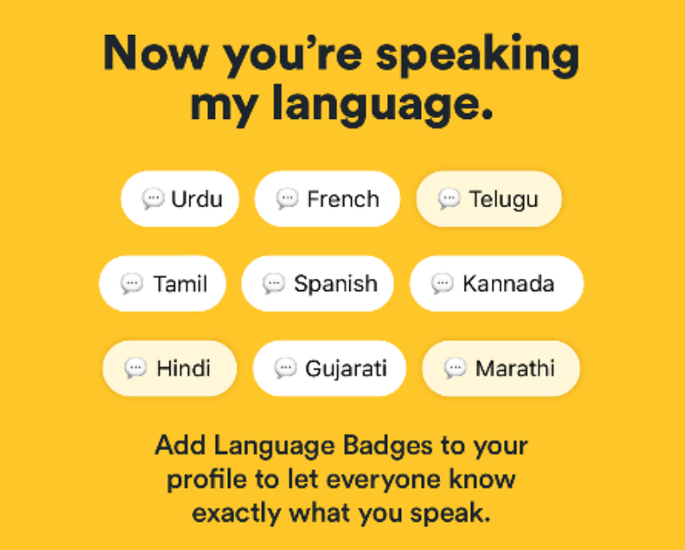 According to a survey conducted by the dating app in 2020, the ongoing Covid-19 pandemic and lockdown restrictions have changed the dating game for single Indians with a shift in partner priorities.

The survey also found that single people in India are approaching sex and intimacy more openly.

India had the highest percentage of Bumble users (34%) who respond that they are more open to exploration when it comes to sex compared to the US, UK, Australia and Canada, the app said.

More than one in three (37%) people surveyed claim they are being more open to sharing their boundaries and desires with someone they are dating right now.

Over the past year, Bumble has made several updates to its platform, including introducing 150 new interest badges in dating profiles.

The popular dating app also recently launched its ‘Night In’ feature, where two people can participate in an interactive game during a video chat.

Dating apps Aisle and Neetho have followed in Bumble’s footsteps and have also launched language badges.

Neetho is a matchmaking service for Telugu speakers. The app was created by the makers of Aisle, one of India’s most popular dating apps.

Ravinder is a Journalism BA graduate. She has a strong passion for all things fashion, beauty, and lifestyle. She also likes to watch films, read books and travel.
Celebrity MUA says ‘Makeup isn’t About Getting Fairer’
The Beauty Checklist every Desi Bride Should Follow