An Indian couple was arrested for committing a triple murder in South Delhi. Preeti Sehrawat and Manoj Bhatt were arrested at a hotel in Gurugram.

"Sehrawat's phone was switched off on the night of the murder."

Indian couple Preeti Sehrawat and Manoj Bhatt were arrested on June 26, 2019, for committing a triple murder in South Delhi.

They killed an elderly couple and their nursing attendant in an attempt to steal cash and valuable jewellery.

It was reported that Sehrawat, aged 42, and Bhatt, aged 39, had suffered financial losses and desperately needed money. They used to run a restaurant.

The couple planned to murder and rob the three victims in South Delhi’s Vasant Vihar.

The Mathur’s and Nautiyal were found dead in the first floor flat. Police suspected that someone known to the victims was involved as there was no sign of forced entry.

Bhatt asked Sehrawat to find a house they could rob. Sehrawat, whose mother knew the elderly couple, identified them as an “easy target.”

The Indian couple were spotted on CCTV but hid their faces as they entered the building at 11:30 pm on June 22, 2019.

They left the house at 2:30 am with their faces still covered but with a different set of clothes on.

Sehrawat became a suspect when the victim’s daughter told the police about Sehrawat’s sudden visit to her parent’s flat after four years.

The suspect had asked about who had access to the flat, which she thought was strange. 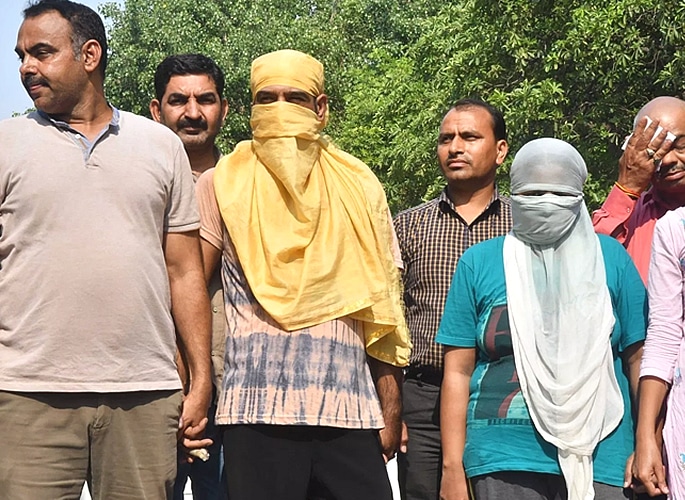 An officer said: “We found that Sehrawat’s phone was switched off on the night of the murder.

“She was in a live-in relationship with a man, who served five years in jail in suspicion for his wife’s murder in 2010.”

On the night of the murder, the suspects arrived at Vasant Apartments on a motorbike.

“Sehrawat rang the doorbell and Nautiyal opened the door. Shahsi said she was going to sleep as she had taken her medication for the night. She asked Nautiyal to serve tea to Sehrawat.”

Bhatt was waiting outside. Sehrawat convinced Khushbu to let him in.

She asked Khushbu to increase the TV volume. As the nursing attendant watched TV, Bhatt gagged her from behind and stabbed her thirty-six times.

The couple then went to the couple’s bedroom and stabbed them as they slept.

Police said the Indian couple drank alcohol and smoked cigarettes. They then left empty packets and bottles in a room in an attempt to mislead police officers.

They then changed their blood-soaked clothes and left the building.

Sehrawat and Bhatt stayed in various hotels until they were arrested on June 26 at a hotel in Gurugram.

They told officers that they were in need of money and were constantly looking for “vulnerable” targets.

Officers said Bhatt was arrested in 2010 for allegedly murdering his wife. He was in prison for five years until 2015 when he was acquitted due to a lack of evidence.

Sehrawat and Bhatt had known each since 2016 and had been living together in Gurugram.

They have been booked under three counts of murder of the Indian Penal Code.

Dhiren is a journalism graduate with a passion for gaming, watching films and sports. He also enjoys cooking from time to time. His motto is to “Live life one day at a time.”
Indian Man kills Wife for Chatting to Men on Facebook
Bollywood Actresses arrested as Part of Prostitution Racket