Triple the Fun in Humshakals

"I started writing Humshakals in the week of Himmatwala’s failure."

After a disastrous flop (Himmatwala, 2013), Bollywood’s self proclaimed ‘King Of Comedy’, Sajid Khan surprisingly has the ‘himmat’ to come back with a nonsensical comedy, Humshakals. The film is produced by Vashu Bhagnani along with FOX Studios.

Humshakals as the title suggests is the story of the complete comic chaos where situations go out of control when three individuals find out that they have a lookalike of a lookalike, all with the same name. 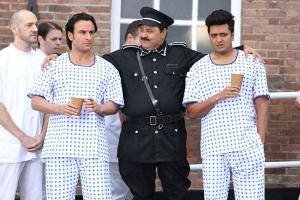 In short, it’s a ‘kindly leave your brains at home before proceeding to the cinema’ film of three individuals having triple roles and the mayhem that comes along with it.

The director of the film, Sajid Khan, famously known as the brother of the choreographer and director Farah Khan has given some blockbuster slapstick comedies like Heyy Babyy (2007), Housefull (2010) and Housefull 2 (2012) in the past. However he claims that his last directorial venture Himmatwala failing at the box office made him realise that he belongs to the genre of comedy: 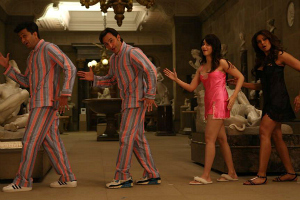 “I started writing Humshakals in the week of Himmatwala’s failure. I feel I wrote it vehemently because I wanted to make myself laugh. The freshness of Humshakals is its USP.

“I can promise and guarantee that people will have a silly smile on their faces throughout the film. It is very difficult to make a comedy which caters to all age groups, but I think I have been able to pull it off with Humshakals,” Sajid says.

The entire film was shot in London barring two songs which were filmed in Mauritius. The Humshakals team was also found tweeting about their thrilling experience of shooting at the famous MI6 building.

The team received special permission to shoot in the MI6 building, located in the central London, on the bank of the River Thames. It is said that the MI6 building being an iconic architecture, due to the security reasons they do not let anyone enter the building.

However, Sajid Khan, being fascinated by the building, was keen to shoot in this building and using his special resources he managed to seek permission to shoot for one day into the building. 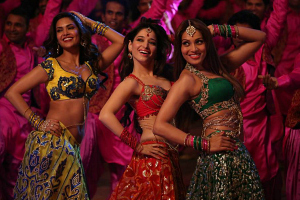 Reports also suggest that on the shoot day, the elevator was under maintenance and the cast and crew had to climb 14 floors of the building. So much for the fascination!

The film is being promoted as an ensemble cast and not just Saif Ali Khan but even Riteish Deshmukh and Ram Kapoor are seen cross dressed as women for their respective roles in the movie, and Saif confesses: “My wife taught me the art of pouting on-screen.”

“Kareena was just amused when she saw us for the first time in our feminine get-up. But both Riteish and my wife are actors so they understand the undertakings we have to sometimes endure for a role.”

Riteish Deshmukh who has been doing comedy films for long said: “For me, it was important to look the hottest between Saif and Ram. So one morning, while I was practicing in the mirror in my get-up, I guess I wasn’t feeling the costume I had on, so I simply reached for Genelia’s skirt. She’s been fighting with me since to get her skirt back!”

The film is also under a controversy as the actress Bipasha Basu has been missing from the promotions of the film and released an open statement on a social networking site saying:

“This is to put an end to all the discussions around my absence for Humshakals promotions. I take full responsibility of getting into a film only on the basis of trust. But after dubbing for my character in the film, as I had professionally committed to do so I’m extremely disturbed by the end result of the same.”

Overall the music album disappoints. Himesh Reshammiya proves that he himself is confused if he is an actor or a music director and gives a very average album. For entertainment, one can listen to the popular and extremely catchy song ‘Caller Tune’, and ‘Hum Pagal Nahin Hai’ which is a hilarious song and makes the listeners’ smile.

Given Sajid Khan’s history with comedy films, a great cast and the promise made to the audience that the film is 9 times the fun, the film is much awaited and is expected to fare well at the box office. Humshakals releases from June 20.

Komal is a cinéaste, who believes she was born to love films. Apart from working as assistant Director in Bollywood, she finds herself doing photography or watching Simpsons. “All I have in life is my imagination and I love it that way!”
British Pakistani film Tamanna thrills
Humshakals ~ Review