"We decided to work with the team because they were doing something new and original."

Tamanna follows the troubled life of Rizwan Ahmed (played by Omair Rana) who is an actor in hardship. One day he meets Mian Tariq Ali (played by Salman Shahid) a legendary veteran actor. 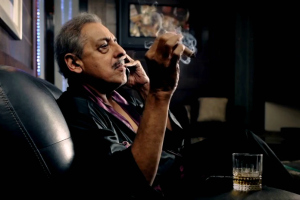 After their meeting, Rizwan begins to stir trouble in Ali’s personal life and insists that he divorce his wife.

Ali’s second wife, becomes an object of desire for Rizwan and the film becomes one of rivalry between the two men, both trying to unhand the other in a series of sadistic games ranging from burglary to murder.

Producer Sarah Tareen admits: “The story is essentially about class snobbery, adultery and ego. We have purposefully chosen realism and artistic integrity over sensationalism, because we want this film to be taken seriously internationally and have a long shelf life.

“Our general philosophy is to stay away from politics and religion and to concentrate on class and social issues. This film is not ‘masala’ but neither is it parallel cinema – it is midway, and is aimed at intelligent viewers from any background. The story is relevant to present Pakistani culture with its emerging middle class challenging the gentry.”

Director Steven Moore mentions that he was intrigued by Pakistani culture and its unique habits. It was for this reason that he opted to direct such a film, taking a very British production and adapting it to a South Asian setting:

“After spending five years in Pakistan, living like an ordinary citizen, not in some foreign enclave or working with a single organisation with an agenda, I feel very connected with what’s happening here,” Moore says.

“I needed time to both mature as an artist and understand the country and the people of Pakistan. The important thing is that the current slide in the film industry is reversed, and the stories of a generation are not lost forever,” Moore adds.

Salman Shahid and Feryal Gauhar were the first to cast for the film in 2009. Hameed Sheikh known for his roles Khuda Kay Liye (2007) and Kandahar Break (2009), was also selected, but was then later replaced by Omair Rana. It was thought that Mehreen Rahael would play only a minor role, but she was eventually given a more extensive role around the time of principle photography.

A very talented Pakistani cast, Tareen admits that it is the chemistry between the two leading men which really make the film special: “Two of the things, which I absolutely love about the film amongst others is the fantastic chemistry shared by Salman and Omair. Also, the ending is beautifully written. Although, the film is male-dominated, Faryal Gohar’s role is integral to the film and people will realise that after watching it.”

Much of the music that will be featured in the film has been composed by British Composer, Arthur Rathbone Pullen and Sahir Ali Bagga. As Sahirv says: “We decided to work with the team because they were doing something new and original.”

The songs are sung by Rahat Fateh Ali Khan, Ali Azmat and the cultural icon Yousuf Salahuddin. The title track for the film Tamanna has been sung by Amanat Ali and composed by Afzal Hussain. Steven Moore says:

“The unique thing about the film’s music is that it doesn’t just comprise Bollywood-inspired songs and dance numbers. The music extends meaning to the film.”

The album of the film includes three tracks two of which were unveiled at the music launch; the title track and ‘Chal Oye’. The soundtrack of the film has already received recognition as it won an award in the London Asian Film Festival (2014) for the song, ‘Koi Dil Mein’, of which was sung by Rahat Fateh Ali Khan.

Steven Moore explains about inspiring the artists to let them do their work instead of implying to them what type of music they are looking for. Moore says: “If you tell artists to make music for something specific, such as a film, then they tend to interpret it as an ‘assignment’, thus losing sight of creating something unique.”

It is clear that Pakistan is becoming much bolder in its attempts to find a standing in the global film industry. By dealing with unique subjects and noir style of cinema, Pakistani directors are showcasing their talents in creating big contenders and independent movies that can be matched on an international level. Tamanna released from June 13.

Nadeera is a model/dancer hoping to take her talents further in life. She likes to carry her dance talent in charity functions and is passionate about writing and presenting. Her life motto is: "Live life over the top!"
Akshay Kumar’s Fugly is a Social Thriller
Triple the Fun in Humshakals