An Indian artist, Pradosh Swain, virtually launched his collection of paintings. He pays tribute to the endless struggles of the farmers.

An Indian artist launched a virtual showcase of his paintings on May 15, 2021, to pay homage to the farmers.

The project, Power of Plough, was created by a Delhi-based artist, Pradosh Swain.

He launched the art in respect to the Akshaya Tritiya festival, which marks endless prosperity, as well as for the farmers festival in Odisha which is Swain’s native state.

He mentioned that the farmers’ issue in India has gone out of focus, due to the ongoing Covid-19 crisis.

Paying tribute to the farmers, Pradosh Swain calls them “the silent warriors of the pandemic”.

Pradosh highlights that farmers cannot even have the luxury of working from home. He said:

“Farmers feed the world but can never work from home, even during the lockdown.

“If that ever happens, we will all starve.”

Therefore, he stated that farmers also fall under the frontline workers category in this pandemic. 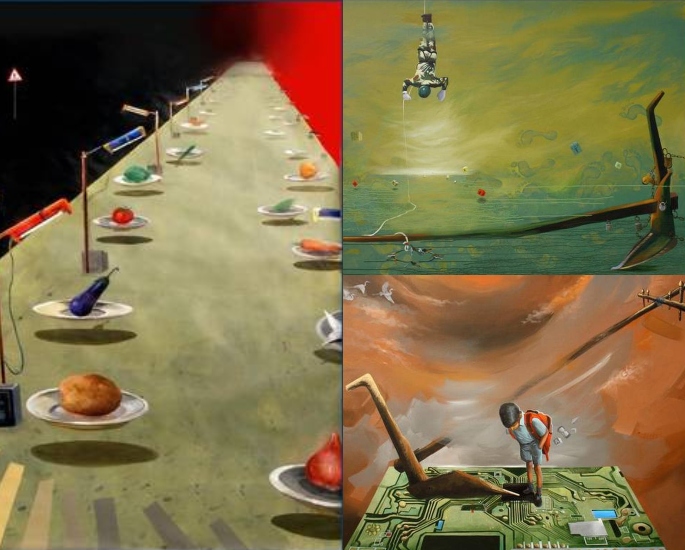 The Indian artist went on to mention the fall of agriculture in India. He said:

“We regularly read newspapers about how farmers’ ratio is reducing and agro lands are being converted into concrete structures.

“If we do not respond to this truth, food production may stop shortly.”

Pradosh Swain has tried to reflect all these fears through his paintings.

One of his paintings portrays a child on a Roti, which is chained with locks.

Another painting shows a soldier in uniform descending with a rope tied to his body, to a plough that is chained to the ground.

Swain was born and brought up in a small village near Cuttack, Odisha and so his paintings reflect his upbringing background.

Some of his paintings also reflect the dilemmas that confront children on farms, especially those who face the challenges in opting between the classroom or the farm.

Previously, many other artists have also depicted the endless struggles of the farmers in India.

In April 2021, another artist named Lalon built a memorial at the Delhi-Rajasthan border to honour the farmers who lost their lives during the ongoing farmers’ protest in India.

He used the materials like terracotta and iron, to symbolise the earth and sturdiness of a farmer.

It was held in an open space where 30 artists including Pradosh Swain had displayed their paintings and sculptures.

Shamamah is a journalism and political psychology graduate with a passion to play her part to make the world a peaceful place. She loves reading, cooking, and culture. She believes in: “freedom of expression with mutual respect.”
Marina Wheeler’s Book nominated for Literary Award
Desi Feminist Instagram Accounts to Follow