Highlights of the 6th Asian Awards 2016

The 6th Asian Awards 2016 honoured the successes of Asians across the world from Naughty Boy, Kunal Nayyar, Osman Yousefzada and Mother Teresa.

The 6th Asian awards, held on Friday 8 April, 2016 at the Grosvenor House Hotel, was nothing short of a star studded affair.

The awards honoured the achievements from within the worldwide Asian community in the fields of business, philanthropy, sport, entertainment and popular arts and culture.

Naughty Boy notched up his 13th award in his career, when he won the Excellence in Music award: “There was a time when I didn’t want people to know I was Asian. Now I feel like I can celebrate being Asian,” he said.

Emeli Sande presented the award to Naughty Boy, who he reveals is his favourite artist to work with: “It started with Emeli and probably will end with Emeli.

“When it comes to writing songs and being honest, Emeli is incredible to work with. Then Beyonce – she’s the hardest working person in the music industry.”

When asked about what his favourite song is from Zayn Malik’s new album, he said: “I haven’t listened to the album enough to have a favourite but he’s doing well. He’s got a lot more to show though.”

He also said that he wouldn’t rule out them working together in the future.

The evening was hosted by actor and comedian Alistair McGowan and guests were entertained by a performance from Emeli Sande. 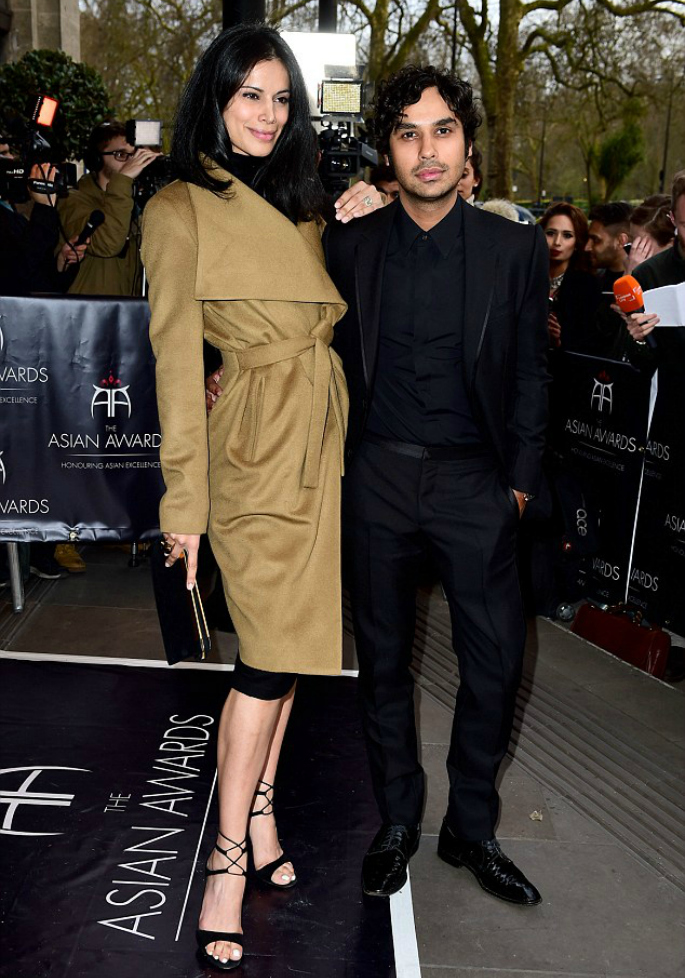 Desi American, Kunal Nayyar won the award for excellence in Television. He talked about his experience across the 10 seasons of The Big Bang Theory, playing Raj:

“I’ve loved playing Raj and producers have done a great job in allowing the characters to develop. Over these 10 seasons, we’ve become a family and I don’t think the show would be able to last as long if all of us hadn’t stayed.

“There’s 2 more episodes until the end of the season then I’m coming to the West End for The Spoils along with Jesse Eisenberg. It’s a dream come true to be this young and have an opportunity to perform at the West End.”

He also revealed his future goal to act and produce in an Indian film. His advice to young Asians endeavouring to break into the mainstream is to work hard: “Everyone thinks you can wake up on morning, do a few expressions and you can become an actor. 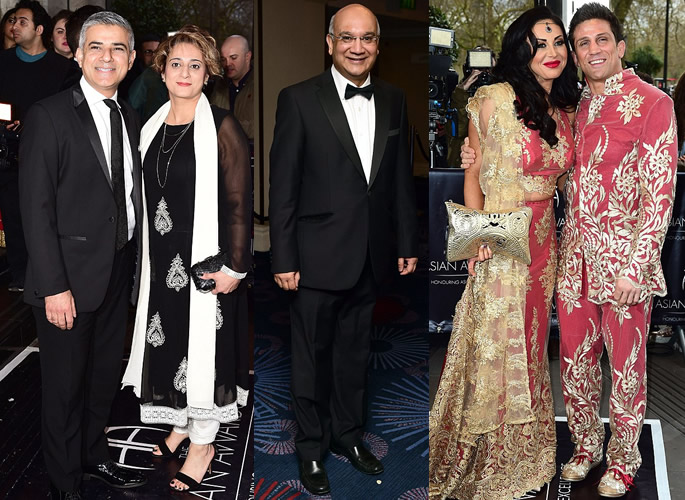 “I don’t understand that. I studied for 7 years. You have to train. Musicians train, gymnasts train, dancers train, so I would not understand why actors would not train.”

The ‘Founders Award’ went to Mother Teresa to reward her exemplary contribution towards the Asian community.

Mother Teresa’s closest living relative from Italy, Agi Bojaxhui came to accept the award. Mother Teresa founded the Missionaries of Charity and spent 45 years serving the sick and the poor in Kolkata.

Osman Yousefzada won the award for achievement in Fashion. He has dressed the likes of Beyonce at the Grammys, who he revealed has been his favourite to dress, along with Bollywood actresses like Kareena Kapoor and Katrina Kaif. He considered ‘strong women’ being his inspiration.

Other award winners included Vikram Patel, a physiatrist working towards improving mental health; Shuji Nakamura, the inventor of the blue LED; Son Heung-Min, a Spurs footballer; and Asif Kapadia, the maker of the documentary of Amy Winehouse. 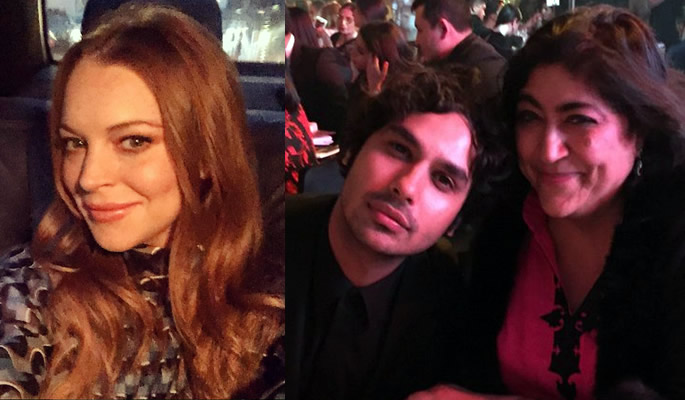 Global Citizen was the charity partner for The Asian Awards this year. Ambassador, Rakhee Thakrar, said: “It’s amazing to see so many different industries under one roof. Everyone’s journeys and challenges are so inspiring.”

Lindsay Lohan made a surprise appearance at the Asian Awards in a blue Fendi dress. Other members of the guest list included reality TV stars and British Asians in the entertainment industry.

Jasmin Walia, from TOWIE and Desi Rascals, stunned in a golden dress, accompanied by boyfriend Ross Worswick. She elaborated on the rumours of her being engaged:

“Basically we were in a restaurant and my ring got tight so I swapped fingers without even realising! We’re actually really happy at the moment.”

On their Desi Rascals experience, Jasmin and Ross revealed that the best thing about it was doing it together and meeting such different people. Ross said:

“We’ve done quite rowdy shows which is a lot based on conflict and with people my age. But this was a family show and I got to hang out with people like Manoj who are wise and had a different life experience, which was refreshing.” 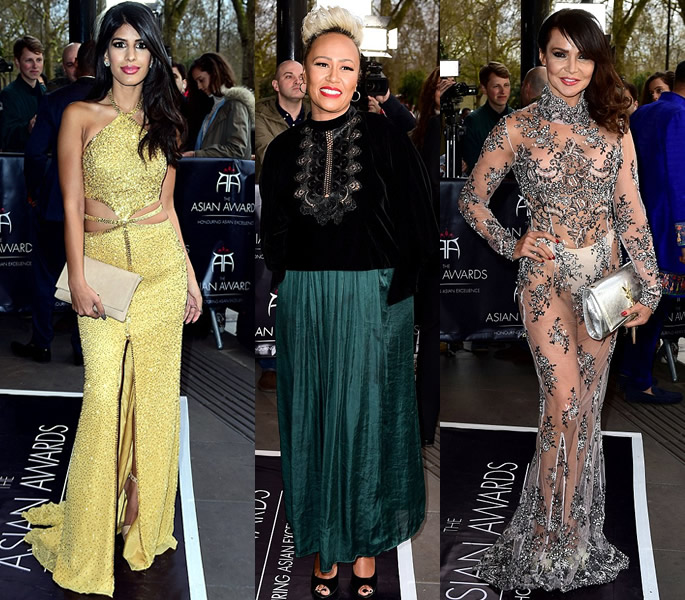 Yasmin Karimi, also from Desi Rascals, said that being at the awards inspire her to work so much harder: “I’m currently working on my brand and would love to have my own reality show one day.”

Many British Asians present at the awards also touched upon the progress of Asians in the television industry. Adil Ray from Citizen Khan said:

“Diversity is important in the entertainment industry as we need more voices. We should not expect Asians to have stories defined by culture.”

Sanjeev Bhasker talked about how the American TV industry compares to the British:

“There are more opportunities for Asians in American TV – you see the award winner tonight, Kunal, and also people like Aziz Ansari and Priyanka Chopra taking the lead on TV shows. Perhaps this is because there are way more outlets for television in America as opposed to in the UK.”

Here is the full list of winners of the Asian Awards 2016:

Entrepreneur of the Year
Anil Agarwal

The Asian Awards 2016 definitely lived up to expectations and we can only expect that next year’s line up will be bigger, better and more star studded!