PFDC Sunsilk Fashion Week 2015 was a glamorous affair showcasing the best Pakistani fashion from some of the nation’s biggest designers. DESIblitz has all the highlights from the four-day event.

Celebrities like Fawad Khan took to the runway to show off stunning outfits.

Having gained international acclaim, PFDC has carved out innovative Pakistani fashion trends over the years.

Each year, through its Luxury/Prêt, Textile and High Street collections, PFDC continuously raises the bar, welcoming only the most celebrated Pakistani designers alongside some incredible new talent which the Council prides in nurturing.

For 2015, beauty and glamour were present both on the runway and the front row, attended by Pakistan’s fashion elite. Celebrities like Fawad Khan took to the runway to show off stunning outfits.

Here is a recap of the designers and their incredible collections from the four days: 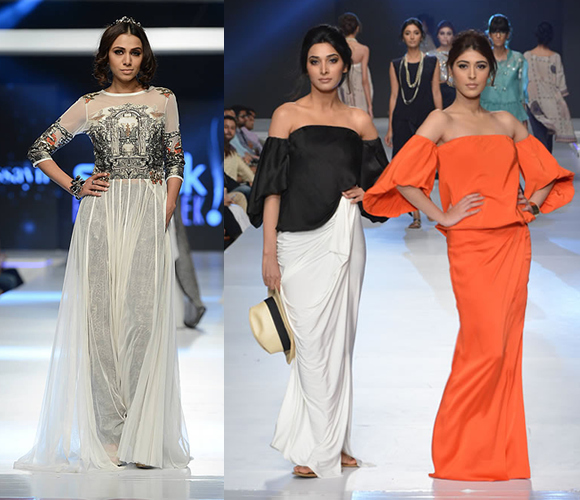 The opening day was dedicated to rising talent. Fahad Hussayn‘s collection titled ‘Democrats Midsummer 2015’ was a beautiful opening to the week. Models sashayed on the runway in spectacular pieces inspired by traditional costumes.

Fitted tops were matched with princess-like voluminous skirts in organza, silk and chiffon, and adorned with regal prints and rich embroidery. 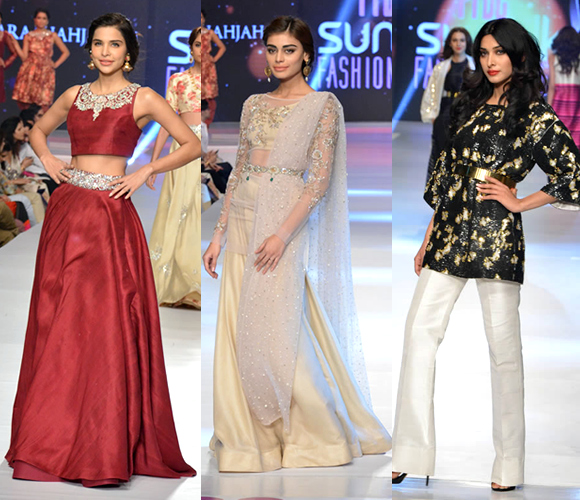 The second day took off with ‘Rock and Rolla’ by Shirin Hassan. The designer matched navy blue hues with custard yellow to create a joyous collection of versatile separates.

Muse‘s ‘Discipline and Drama’ collection took inspiration from the Spring 2014 Couture show by Dior. The designer gave an Eastern spin on Parisian chic in printed tunics over flared pants and textured overcoat, and voluminous skirts combined with bandeau tops and bomber jackets.

The experimental mix-and-match looks were surprisingly chic thanks to the simple silhouettes and minimal accessories on display.

After Muse transported the public to France, Saira Shakira took them on a romantic Italian holiday with her ‘Eclectic Retro’ collection.

She outlined the look of the Eastern Bella Donna in boxy tunics with floral embellishments and voluminous skirts in romantic prints and lace. The look was complemented with natural makeup and waves.

Zara Shahjahan presented staple pieces of the wardrobe of a fairy tale princess. She teamed floor-sweeping skirts in floral prints and desi embellishment with bejeweled crop tops and light shawls. 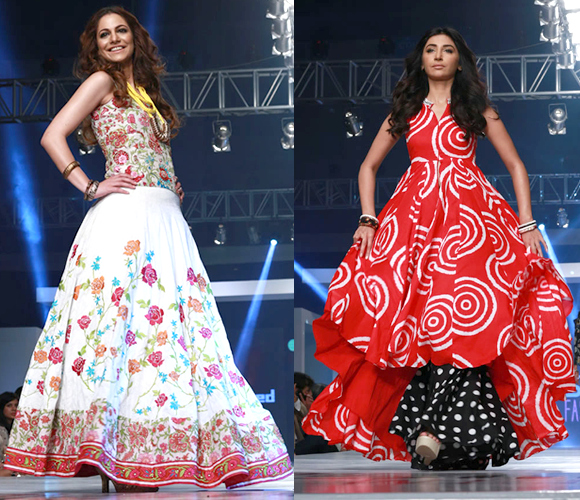 Another textile brand Shubinak presented a collection named ‘Pakistan United’. The clothing on display was made of environmentally-friendly natural cotton and recycled cotton bags.

The Grand Finale of Day 3 showcased the collection of House of Ittehad called ‘The Summer Rouge’ and their menswear line called ‘I-Man’. The show presented an exquisite cultural blend of ethnic detailing from all around the globe.

Both male and female garments featured floral and geometric prints and a combination of bright colours and pastels, adorned with unconventional embellishments. 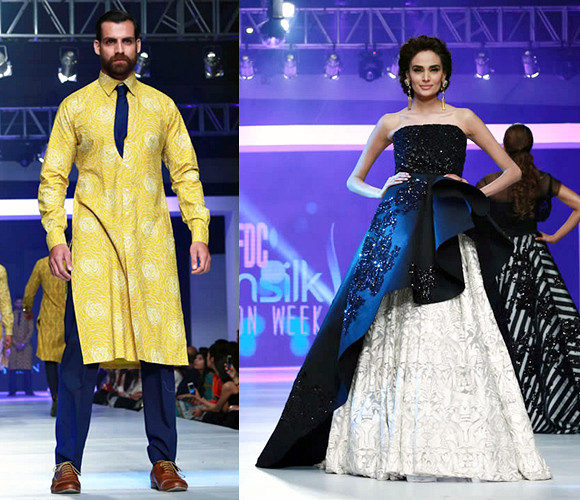 The final day opened with Sana Safinaz. Clothes were set in simplistic cuts in luxe fabrics such as kattan, silks, fine silk organza and duchess satin.

Garments featured a strict monochrome palette, but were rejuvenated with splashes of colour, resulting in a modern and fresh line.

The Grand Finale showcased the work of the notable couturier, HSY, who presented an Asian-inspired collection named ‘INK’.

His clothing featured traditional Asian techniques including dyeing fabrics from Nagasaki and the Batik technique from Indonesia; all executed with a high level of craftsmanship. It resulted in a colourful collection appropriate from men and women of all ages.

The 8th edition of PFDC Sunsilk Fashion Week welcomed the best and most celebrated fashion designers in Pakistan. Rising talent presented their collections alongside seasoned talents and couturiers in a compelling showcase of versatile garments.

Blending Eastern and Western, modern and ethereal, conventional and experimental, the extravagant event proved that Pakistani culture has a lot to offer to international fashion lovers.

Dilyana is an aspiring journalist from Bulgaria, who's passionate about fashion, literature, art and travelling. She is quirky and imaginative. Her motto is 'Always do what you are afraid to do.' (Ralph Waldo Emerson)