Aishwarya Rai Bachchan stunned in white as she opened the Chennai showroom of Kalyan Jewellers. The Bollywood beauty was joined by father-in-law, Amitabh Bachchan.

“I have always had a special bond with Chennai."

The irresistibly glamorous Queen of Bollywood, Aishwarya Rai Bachchan, took our breath away once again as she graced the showroom launch of Kalyan Jewellers in Chennai.

She was joined by father-in-law Amitabh Bachchan and a plethora of other Indian film stars and guests including Prabhu Ganesan, Nagarjuna, Shivaraj Kumar, Manju Warrier and Vikram Prabhu.

The ageless actress looked the definition of regality as she donned two stunning white outfits designed by Rohit Bahl and House of Kotwara; and styled by Aastha Sharma.

Her first look was a beautiful anarkali dress with gold embroidery, which she paired with matching chandbali earrings.

Later in the evening, she exuded classic elegance in a simple white embellished Kotwara saree by Meera and Muzaffar Ali, matched with Kalyan accessories. 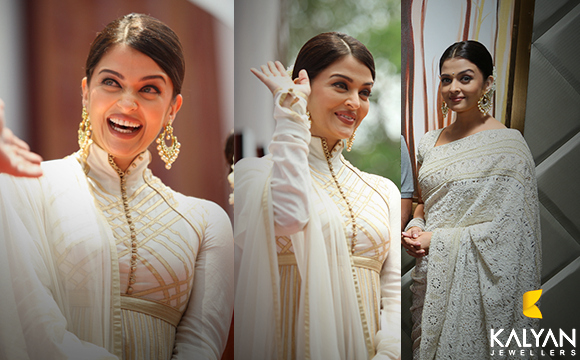 Ash wore her hair up in a chic bun that was decorated with white flowers and encrusted hairpins.

The actress has been on a visit to Chennai to launch the opening of a new Kalyan Jewellers store, of which she is brand ambassador.

Speaking at the launch, Ash said: “I have always had a special bond with Chennai. This inauguration of Kalyan Jewellers is special as it is my first such event with my ‘Paa’ [Amitabh Bachchan].

“The inaugural store of Kalyan Jewellers in Chennai is very impressive and I encourage all Chennaites to shop for their jewellery from the 5 lakh designs available here.”

Aishwarya recently shot an ad video for Kalyan with Amitabh where she again stunned in a neutral salwar kameez.

The actress who has returned to her acting career is starring in Sanjay Gupta’s upcoming film, Jazbaa, which will release in late 2015.

Ash also has the Cannes Film Festival to add to her hectic schedule this spring, where she will be attending on behalf of L’Oreal, alongside fellow ambassador Sonam Kapoor.