With the rising value of gold, British Asians have become the latest targets for burglars.

Hundreds of thousands of pounds worth of Indian gold and jewellery were stolen from Gem Jewellers in an armed heist in Coventry on January 29, 2015.

In an attempt to identify the masked thieves, the West Midlands Police has released a CCTV footage of the ram raid that took place at Gem Jewellers.

The footage begins with a stolen silver Mercedes SLK 230 blustering its way through the glass front window of the jewellery store.

Three masked men dressed in black ran around the store to steal jewellery.

A fourth man, also dressed in dark clothes, exited the stolen vehicle to join the heist. However, they were caught off-guard by the store’s incredibly slippery floor. 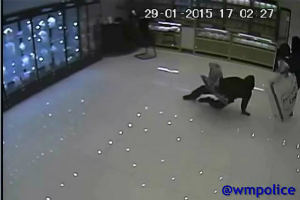 The thieves were constantly sliding while making their way to the jewellery cabinets.

As two thieves eventually fell onto the marble-white floor, one of their partners-in-crime almost ran into them.

But they were determined not to let their clumsiness take over.

The four thieves brought out their axes and started smashing the glass cabinets and cupboards, filled with expensive Indian gold and jewellery.

Once again, their clumsiness got in the way. The masked men triggered the store’s smoke alarm and were forced to flee the scene in another stolen vehicle – a white Audi A3 Sport TDI.

By then, they had already bagged thousands of pounds worth of valuables from Gem Jewellers.

The owner of the shop was in the store at the time. Fortunately, he was physically unharmed.

The West Midlands Police are highly concerned about the dangerous nature of the raid.

Detective Constable Lee Buckler, the investigating officer, said: “Some may think this is was a victimless crime but I want people to be under no illusion.

“These are dangerous and desperate men who threatened to shoot a man who was passing the store at the time they raided it.”

He added: “The driver of the getaway car also drove dangerously through the streets of Coventry to escape the scene. These men definitely deserve to be behind bars.”

It is highly alarming the thieves had the audacity to execute the raid during rush hour – at approximately 5.20pm on a Thursday – in a store which is 3-minute walk away from a primary school.

Asian gold theft in the UK is not new. With the rising value of gold, British Asians have become the latest targets for burglars.

Dr Shakeel Ahmad was a victim of gold robbery in March 2013. He expressed frustration at the hideous crime: “The burglars went through everything they could find in the house – everything was ransacked, including the children’s toys.” 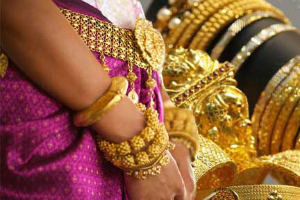 “It’s left us feeling shocked, worried and very vulnerable. My 10-year-old daughter has been having nightmares.”

Fear and anxiety among Asian jewellers are also high. An anonymous store owner said: “There is a fear daily. This is what we are living with now.”

Detective Constable Buckler remained confident the violent gang that attacked the Coventry store would be brought to justice.

He said: “Having stolen hundreds of thousands of pounds worth of Indian gold jewellery, their new found wealth combined with their unique floor moves will undoubtedly give them away.”

Police are still searching for the masked thieves involved in the Gem Jewellers robbery.