An Asian jewellers in Bradford was the victim of a broad daylight ram raid. Three men are suspected to be involved in the raid on the jewellery shop.

"I saw the Mitsubishi reverse into the shop and two men jumped out."

A ram-raid occurred at an Asian jewellers on Leeds Road in Bradford on Tuesday, May 14, 2019.

The raid allegedly involved three men, a Mitsubishi Shogun and a Mercedes ML. They targeted and attacked the S&S Jewellers at noon.

A witness managed to capture the immediate aftermath of the raid at 1 pm. The video appeared to show the suspects fleeing the scene.

The suspects had used the Mitsubishi to ram into the shop before jumping out of the vehicle and raiding the jewellery shop. It is unknown if they stole any of the jewellery.

After running out of the shop, another person pulled up in the Mercedes before the three of them escape.

Mohammad Afzal, of Leeds, witnessed the raid on the Asian jewellers and spoke about the incident.

Mr Afzal explained: “I’d gone shopping a couple of doors down and as I was coming out, I saw the Mitsubishi reverse into the shop and two men jumped out.

“After they’d done what they had to do, they ran out of the shop.

“A driver in a Mercedes ML then pulled up and the three of them escaped in that. I would have tried to tackle them myself but they looked like pretty big guys.”

The Mitsubishi Shogun was left abandoned outside the jewellery shop in the middle of the road. 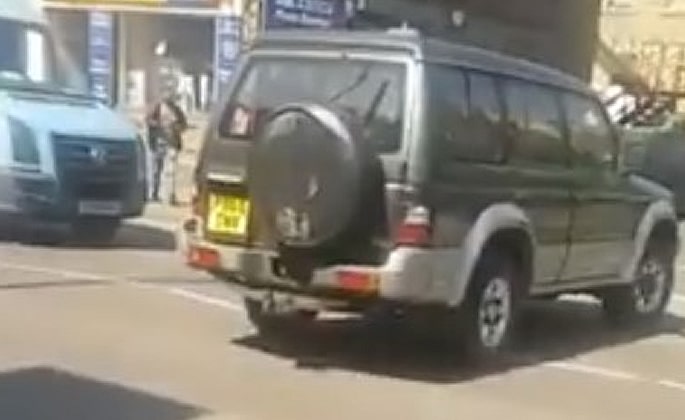 People in the area have been told not to touch the vehicle as it will have fingerprints on it.

Labour Councillor of Bradford Moor Mohammed Shafiq gave his thoughts on the raid:

“The shop is within my local ward and I am deeply concerned to learn about a daylight attack on a local jewellers.”

“This is absolutely unacceptable and I would urge the local community to pass information on to police to prevent any further incidents like this.”

The Telegraph & Argus reported that police officers arrived at the scene and the shop has been cordoned off while investigations into the raid begin.

In another incident, a gang was jailed for a total of 49-and-a-half years for carrying out a raid on a jewellery shop in Newcastle and making off with £300,000 worth of items.

One gang member gained access by pretending to be a customer before the others entered with sledgehammers and smashed the glass cabinets.

They used a car to get away and switched cars shortly after. They were tracked down after one member of the public reported an abandoned vehicle and said she recognised the driver.

It turned out to be one of the vehicles used in the heist and the gang members were arrested and jailed.

Dhiren is a journalism graduate with a passion for gaming, watching films and sports. He also enjoys cooking from time to time. His motto is to “Live life one day at a time.”
Indian Woman sold by Father for Rs 10k Gang Raped by Owner
Punjab Village rules Against Supporting Love Marriages