Growing Epidemic of Drugs in Punjab

Drugs and narcotics have reached critical status for India’s Punjab. It is estimated that at least 1 in every 4 young person is addicted to drugs. DESIblitz takes a look into this growing epidemic to find out more.

India’s Punjab is facing a major epidemic in the form of drug addiction that has pushed the future of an entire state into the dilapidated realm of despair and disappointment.

With agricultural fields exemplifying the essence of an entire country. Youth brigades who were considered harbingers of a bright and better future. And where life seemed surreal to say the least. This is the picture of a decade old Punjab, the food bowl of India.

Now imagine a state trying to keep its head above water due to substance and alcohol abuse. A state, whose values and traditions are withering away with each passing moment and a state where the power of the youth is now dormant.

This is the modern Punjab, where 73.5% of the youth between 16 and 35 years are confirmed drug addicts, according to the Punjab government’s report. 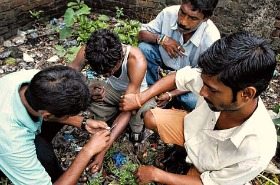 Punjab is facing the worst crisis it has ever known in the form drug addiction. Be it the contingent of affluent people or masses living in a destitute state, there are numerous options that are easily available for people who want to embrace the vices of substance abuse.

Opium, which was prevalent in the past, has now paved the way for heroin and other illegal substances. Maqboolpura, a village in Punjab serves as a window for the rampant growth of drugs. Here, peddlers can be easily found offering a special deal for ‘good-quality of heroin for $45 per gram’.

The most shocking aspect of this nexus between insinuators and victims is the blatant display of amoral behavior. Drug peddlers and drug addicts can be seen visibly on every road stretch in Punjab:

“Keep some for me,” says Mr. Singh, who is H.I.V. positive, and does not flinch while saying: “Shoot my picture and me famous.”

The majority of the population between the ages of 15 and 35 are seriously addicted to various drugs in Punjab. 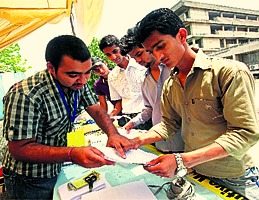 But people who reside in Punjab are not the only ones who live their life at the mercy of drugs. According to Mr. Bhatia from Delhi, who is studying electrical engineering, Punjab has become a go-to place where you can get anything everything without much ado:

“There is a reason why I and my friends go to Punjab once in a while,” says Mr. Bhatia.

“I have been to Punjab and let me tell you something, the reports in media are just a tip of an iceberg. What seems to be a serious concern for the entire country is the fact that quantifying the actual cases of addiction is practically impossible.”

“It seems that everyone knows that Punjab is now a ticking time bomb whose expiration date is coming to an end, but no one wants to do something to avert this disaster,” says Mr. Ajay, who visits the state occasionally to meet his relatives.

Dr. Rana Ranbir Singh, is a psychiatrist in a government-run clinic. He is possibly a prophet for India’s brighter future amid the deluge of cases that are now flooding the government and private hospitals alike. He is trying to help people in rehab and give them another chance to not just breathe, but also live. 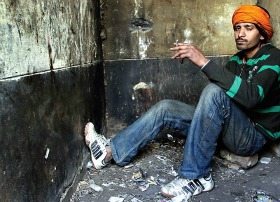 The government is faced with an uphill task when it comes to cracking down on this multi-million racket: “We have encountered the problem of liquor during elections in almost all states,” said S. Y. Quaraishi, India’s chief election commissioner.

“But drug abuse is unique only to Punjab. This is of dire concern,” he adds.

Raj Pal Meena, former head of state’s Anti-Narcotics Task Force (ANTF) stated: “Punjab is teetering on the edge of an extraordinary human crisis, with an inordinately large number of youngsters hooked on to marijuana, opium and heroin, in addition to imbibing a range of prescriptive tablets.”

Rahul Gandhi faced the eye of the storm when he categorically stated that 7 out of 10 youngsters were drug addicts in Punjab. Not just opposition but complete outcry from the people of Punjab seems to weigh heavily on his shoulders after his statement.

But with the shocking reports that are now readily available in the public domain, maybe it is high time to stop living in denial and narrate the untold story about a state’s unremitting death because of  drugs and alcohol addiction to the nation.

It is time for the state government, central government and people to join hands, resuscitate, and restore the lost sheen of Punjab.

Dreamer by day and a writer by night, Ankit is a foodie, music lover and an MMA junkie. His motto to strive towards success is “Life is too short to wallow in sadness, so love a lot, laugh loudly and eat greedily.”
Sex Addiction ~ a Problem for Asians?
Indian Women drinking Alcohol on the Rise