"More than anything, it's a very passionate project for me"

Donning black t-shirts with the slogan ‘Drugs Di Maa Di’ the actors paraded on stage and greeted huge turnout of fans unveiling news about their roles and the film.

A story of Bollywood interest is that we saw ex-couple Kareena and Shahid back together again on stage, although they do not share screen space in the film together. Shahid did admit he is going to become a father at the launch.

Directed by Abhishek Chaubey, Udta Punjab is a story about four different people and their lives connected by them living in the state of Punjab in India.

The motive of the movie is to highlight the issue of drug addiction in Punjab, where the trailer says, 70% of youth in Punjab is addicted to drugs, and if not stopped it will become like Mexico. It also explores the manner how drugs are trafficked in Punjab and the associated network.

Shahid plays the dense character of a drug addict called ‘Tommy Singh’ and says it is one of the scariest roles he has ever played. He was the first out of the actors to be cast in the film.

Shahid says: “Today, people are veering towards roles that will get the numbers. With Udta, I hope things change. It definitely is a risk but the way Abhishek has shot the film, it’s a risk well paid off. More than anything, it’s a very passionate project for me. I was so blown away by the world that Abhishek was planning to create that despite all odds, I wanted this film to happen.”

He stars closely with Alia Bhatt, who revealed that she got the part in Udta Punjab all because of Shahid Kapoor.

Alia says, “Udta was not even offered to me. No one, including the director thought that I will do the film so he did not come to me with it. Shahid gave me the film to just read. He asked me, ‘Tell me what you think of it’. I read it and fell in love with the film. That’s how it happened.”

Alia plays a non-glam role of a girl from Bihar who is also tangled in the web of drugs and gets close to Shahid’s character.

Alia reveals that she is keen to do the challenging roles and said: “I don’t want to be known as a pretty face only. That’s not what I am here for.”

The roles of Kareena and Diljit bring them together for some intense chemistry.

Kareena plays the role of Dr Preet Sahani, who moves to the heartland of Punjab to tackle and expose the drugs issue. She reveals how the drugs are chemically being produced to menace the state.

“It’s a special role. Short and sweet. But I think it’s effective and I’m happy I got the work with a wonderful director and visionary.”

Punjabi singer and actor Diljit Dosanjh plays the role of a tough and bold police officer who is involved in the fight against drugs in Punjab and pursues Tommy Singh.

This gritty film looking at substance abuse in Punjab is set to be release on June 17, 2016.

Here is the official trailer to Udta Punjab: 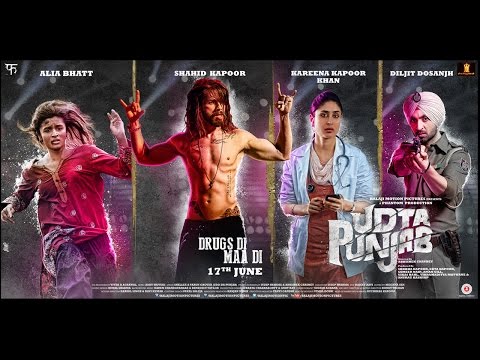 Nazhat is an ambitious 'Desi' woman with interests in news and lifestyle. As a writer with a determined journalistic flair, she firmly believes in the motto "an investment in knowledge pays the best interest," by Benjamin Franklin.
Aishwarya Rai intensely Beautiful in Sarbjit
India’s Next Top Model returns for Season Two