Veteran Bollywood actress, Hema Malini was injured in a car accident in Rajasthan involving her Mercedes and a hatchback. Resulting in severe passenger injuries and the death of a young child.

"One girl child has died in the accident. Hema has injuries above her eyes, on her back and legs."

Police report that the Mercedes Malini was travelling in, smashed into the Alto on the Lalsot bypass. Malini was on her way back to Jaipur after a trip to the Mehendipur Balaji temple in Karauli district.

Witnesses say the Alto car was entering the bypass road from a side road on the highway when the collision took place. 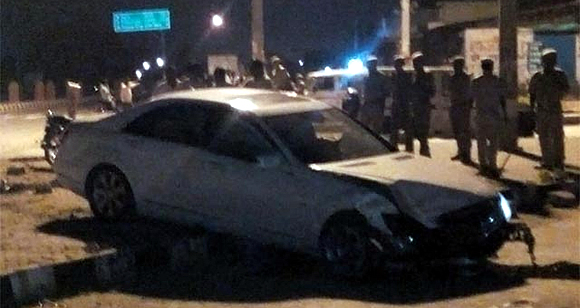 Hema, the 66-year-old MP and veteran actress, was sitting in the front passenger seat of her car and the impact of the collision led to injuries on her forehead area above the right eye, back and legs.

Shankar Lal Sharma, a member of the Rajasthan state assembly, told reporters: “One girl child has died in the accident. Hema has injuries above her eyes, on her back and legs. I drove her to the hospital in my car. She was in pain.” 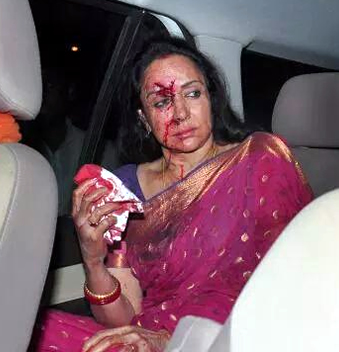 Sharma immediately took Hema Malini to the Fortis Hospital in Jaipur, where doctors conducted a CT scan and then treated her wounds.

A doctor at the hospital said: “She arrived at the Emergency with a cut above the right eyebrow and complained of backache, but other than that, there were no visible injuries.”

He added: “She was coherent, which is always a good sign. We’re running scans for internal injuries, if any.”

The facial injuries were treated by the head of Neurosurgery at the hospital, Hemant Bhartiya and Principal Consultant plastic surgeon Sandipan Muku. She was admitted for an overnight stay at the hospital for observation. Doctors said her condition was stable and not critical.

There were five passengers in the Alto car, a man, two women and two children. Dausa Official, Swaroop Panwar, said a girl child in the Alto car died in the accident, while two of the remaining survivors were seriously injured. 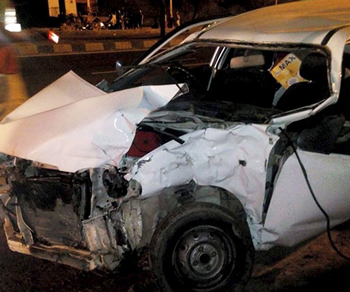 They were initially taken to a hospital in Dausa but were then referred to the SMS hospital in Jaipur.

Dausa SP Anshuman Bhomia said a case was registered against the driver at the Sadar police station in Dausa and the vehicles from the accident were immediately seized.

Visuals of the accident have been shared on social media and TV screens globally. Showing the Mercedes Hema Malini was travelling in severely crumpled and the actress wiping her bleeding forehead.

Hema Malini is married to the veteran actor Dharmendra and has appeared in many hit films in Bollywood, especially in the 1970’s, including Sanyasi, Dharmatma, Pratigya, and the evergreen blockbuster, Sholay.

Moving away from Cinema, in February 2004, she joined the party (BJP) officially and  has been an active member of the party, attending party meetings and rallies and campaigning for the party through various elections.

According to the World Health Organisation, such severe traffic accidents as this one are a major issue in India, where over 200,000 fatalities happen in a year.