A sudden spike in the drinking habits of women in India has caused an interesting stir. DESIblitz attempts to shed some light on the possible causes of this unexpected sea change.

"I can judge what is right for me and what is not."

Since as far back as we can remember, Indian culture has been synonymous with conservative conduct and a hint of regressive thinking when it comes to talking about the modernisation of Indian women.

That being said, the past couple of years have seen a definite paradigm shift, which has fuelled discussions about progressive changes for the female species.

Such changes have meant that the otherwise demure fair sex have now been able to keep up with life in 21st century India. The traditional kitchen setting has now paved way for corporate boardrooms. Coy dresses have been replaced by an audacious vogue sense. And milieu has been transcended beyond the family wall to keep lifestyles in accordance with modern society.

Among many other things, an eye arresting trend amid all this cultural mutation is the surge in the drinking habits among Indian women.

In a metropolitan city like Delhi, where getting anything mainly depends upon the means, consumption of alcohol among women has overshot the prophecies of human psychology experts.

India, however, still shows some kind of restraint in its drinking habits. In Manipur and Gujarat, alcohol is banned outright. The legal age in the capital, Delhi, is 25. That being said, alcohol consumption among university students begins much earlier.

Many of the top Indian colleges around Delhi are prone to hosting off-campus parties around the year. So, of course, heavy alcohol consumption among boys and girls does not come as a surprise.

A girl who is the final semester of her graduation from a prestigious university in Delhi was asked about her alcohol consumption habits. She promptly replied: “Yeah I have. Who hasn’t? I am 20 years old; I can judge what is right for me and what is not.”

Another girl, Miss Taneja, working with an MNC said:

“It is part of corporate culture nowadays; you do not want to be labelled as a spoil sport just because you shunned a glass of wine with your colleagues during post working hours.”

This may appear to be another peer pressure repercussion, but there is more to this shrouded reality. There are a few potential causes for this alcohol consumption growth among women. 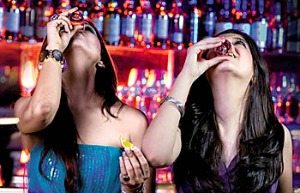 India’s new wave of independent women now make their own choices. They revel in the freedom to break away from the vice of tradition, and indulge in various experiences of life which their predecessors never got the chance to do.

Latching on to this new found independence, liquor moguls are now launching new variants of alcoholic drinks to specifically cater for the needs of Indian women.

Global number one brand, Diageo, has decided to strategise and capitalise on this booming trend with a whole new line of alcoholic products. Another brand, Sula Wines, which is the largest domestic wine brand in India, also launched Dia, a light alcoholic aimed specifically at women.

And this new phenomenon of finding freedom of expression through drink is not confined to the major cosmopolitan cities of India either.

Akshaya, a girl from humble Rajasthan recalls how she tried her first glass of whiskey at a friend’s wedding:

“I won’t even dare to think about consuming booze in front of my parents, but when they are not around, I take my chances,” she admits. 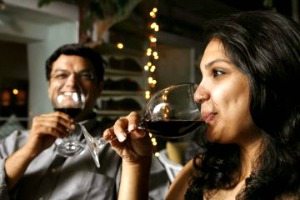 This might be considered as a rebellious and blatant behaviour to most of the people in India but it is the plain truth. With the female populace reaching a new acme of success every day, a change in the perception of lifestyles will gradually transmute with time.

According to the Indian Centre for Alcohol Studies (INCAS), a government research body, less than 5% of women drink. But this is set to change as liquor consumption by Indian women is predicted to rise by 25% in the next five years.

And rightly so! As more and more young women are being lured into the realms of intoxication, an exponential growth will not come as a surprise in the coming years.

Questions that might garner reaction include whether in a country like India, girls should consume alcohol? Whether we, the society, should be open up to the fact that girls can and will make their own choices in the future?

The answers lie within us. If a woman can be a home-maker, a business juggernaut and a harbinger of change for society, can’t she handle herself after couple of glasses at a bar or at a party? Or should the society continue to embrace the backward outlook towards women who have fostered every fibre of life on earth, and label drinking taboo for them as well?

Should a woman’s desires be chained to the shackles of ethos? Or should the society allow her to make her own choices; no matter if it is related to alcohol consumption?

Maybe it’s high time that the moral police and cultural moderators take a back seat and let women decide what is best for them and what is not. Maybe then we can call ourselves an open and integrated society in its truest sense.

Dreamer by day and a writer by night, Ankit is a foodie, music lover and an MMA junkie. His motto to strive towards success is “Life is too short to wallow in sadness, so love a lot, laugh loudly and eat greedily.”
Growing Epidemic of Drugs in Punjab
The Impact of Gay Marriage on British Asians