Obesity is a common phenomenon across the West. But in India, where poverty levels are one of the world’s highest, child ‘diabesity’ amongst the affluent is becoming rife.

"Traditionally it is felt that a chubby kid is desired, it's a sign of being healthy, and wealthy."

However, India’s rapid economic development has transformed cityscapes, aspirations and most prominently, tastes.

Fast food has become the ‘go to’ food. Not only is the face of India changing but so is it’s waistline. As India begins to emanate western ideals, DESIblitz looks at the catastrophic consequences this is having on the nation’s health.

Over the last 10 years western values have resonated throughout India, including an unhealthy appetite for fast food. The economic boom in India has led to an emanation of the west, accelerated tenfold. 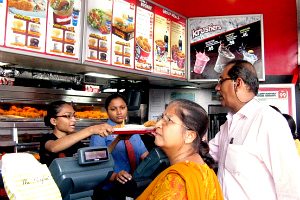 Unlike a decade ago, fast food restaurants can be found on every city corner. But why has India not learnt from our mistakes? We are in the biggest obesity epidemic the world has ever seen.

Recently western fast food markets have slowed. However, in emerging economies like India the industries have boomed.

The exotic nature of fast food and the connotations of wealth associated with it is crowding out the traditional and much healthier Indian fare. Obesity and diabetes are on the rise, and it is this changing face of India, that has culminated in a major health crisis.

Weight gain and health are not negatively linked in India like they are in the UK. Among the affluent classes being overweight is a symbol of both health and wealth. However, it’s this ethos that has led to 1 in 5 children in India being overweight. An even more devastating statistic considering that 50% of the population are under 25.

Childhood obesity is a major issue. Weight-related problems like cardiovascular disease and diabetes can have devastating, irreversible and debilitating effects -especially on children. 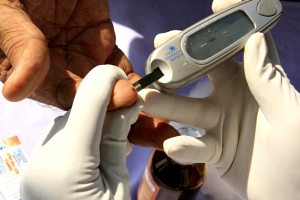 Diabetes can affect all parts of the body as it attacks blood vessels. It can affect the eyes, kidneys, digestive system and nerves. On top of this it leads to high blood pressure and cholesterol.

India has the largest diabetes population in the world. Studies have proven that genetically, South Asians are more likely to develop heart disease and type 2 diabetes. As a result, health professionals have suggested that the BMI system currently used needs to be adapted per ethnicity.

For Caucasians a BMI of over 30 is overweight. However, for South Asians this needs to be lowered to 25 to reflect the population’s genetic makeup. This has meant that many Asians have now been reclassified as ‘overweight’.

Here in the UK, this reclassification has also had an effect. Professor Stephen Field, the president of the Royal College of GP’s states: “The evidence is there. This is an urgent situation because of the increase in diabetes across the Asian population in the UK. Our patients are at risk. They need to be identified early, and treated aggressively.”

In India, obesity and the consequential diabetes-related effects are rapidly beginning to emerge. In a recent BBC documentary, India’s Supersize Kids (2013), Anita Rani reacts to the shocking fate of Mumbai children’s growing waistlines: 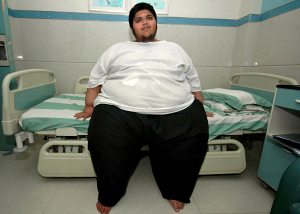 “I am gobsmacked by what I find; the family of a seven year-old child who has had serious gastric surgery to save his life after tipping the scales at 14 stone.

“His mother admits that traditionally it is felt that a chubby kid is desired, it’s a sign of being healthy, and wealthy and she never restricted what he ate,” Anita adds.

In India, medical action against this diabesity is beginning. However, this ‘action’ has meant that doctors are operating on younger and younger patients. India is seeking a quick-fix. Many parents don’t foresee that feeding their children through love could end up putting them at a risk of death on the operating table. A risk that is completely avoidable.

So why is so little being done in India? Put simply, the industry is booming and there is not enough demand for education or intervention. The fast food industry in India is worth £7 million. A figure that is set to double by 2016.

A study published in Nature Neuroscience has proven that fast food is as addictive as heroin. The study undertaken on rats showed that fast food over stimulated the pleasure centres in the brain. 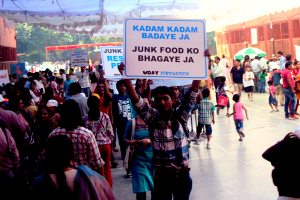 This led to a loss of control over their regulation of appetite. When the rats were put on a healthy diet, they refused to eat the food and would rather starve.

The fundamental problem in India is the lack of regulation. Advertising is everywhere and it’s alluring, glamorous and inviting. Unlike in the UK, advertisers are able to promote their products directly to children.

Although India is beginning to react, the market has boomed at such an incredible rate that it may take years to catch up. There is also a lack of regulation of the food industry itself. Where the UK has become obsessive over what is in their food, India remains clueless. In many cases, the food sold in fast food chains such as McDonalds or KFC contain more saturated fats than the fast food we get.

Until now there has only been a demand for fast food. India has adopted both western ideals and the products. However, education about the products has been entirely sidelined. In India, there is a serious lack of knowledge around what fast food is doing to their bodies:

“Medical professionals are bracing themselves for a massive diabetes surge in the next twenty years and estimate the number of sufferers will reach the 100 million mark,” says Anita.

“So unless India addresses it’s attitude towards food, the 13 year-olds having gastric bands fitted could just be the tip of the iceberg.”

The children of the affluent classes are reducing their life expectancy dramatically through lifestyle choice. These children are the brains of the new India. They are fundamental to the success of India as a super power. So what could this mean for India’s future?

Rather than turning to the knife as a quick fix, India needs food education through schools. This way, although they remain able to make uncensored choices, they also have the capacity to make informed ones.

Here, in the UK, we are fighting back. There are many programmes aimed at South Asians to increase awareness around obesity, diabetes and weight-related illnesses. The British Heart Foundation has released free booklets and DVDs with advice on keeping your heart healthy.

These information packs are produced in English and five Asian languages. The materials even include a cookbook specifically aimed at Asian cooking.

In the UK we have no excuse, the material and knowledge is there. We need to show the way for emerging nations like India.

Jacqueline is an English graduate who loves fashion and culture. She believes that the best way to learn about the world is to read and write about it. Her motto is “Logic will get you from A-Z. Imagination will get you everywhere.”
Popular Remedies for Stretch Marks
High Protein Foods