In a hilarious incident, a husband shoved his wife through a cramped Indian bus window. The matter took place in West Bengal.

the unnamed couple decided to get on a bus

A married couple took an unconventional method when trying to board a cramped Indian bus.

Instead of forcing their way through the front door, the husband and wife made their way to the side of the bus. The man then lifted his wife up and shoved her in, head first through the open bus window.

A packed bus in India is nothing new. Those who have travelled on public transport in the country are aware of the overcrowding problem.

Overcrowding is even more frequent during festivals and special occasions.

However, this did not stop the couple from trying to get on the bus in West Bengal and the incident was captured on camera.

The incident took place in Sagar Dweep, the point where the Ganges meets the waters of the Bay of Bengal.

It happened at a time where thousands of people travel to in order to get into the water.

In 2020, nearly 1.8 million people gathered in the area to take the dip. However, overcrowding on public transport occurred on January 18 when people started to return home.

People attempted to get on local buses that would take them home but they had to wait as they were full.

But the unnamed couple decided to get on a bus no matter how cramped it was.

The man and his wife were seen walking to the side of the Indian bus until they were by an open window. They then decided that the wife would be the one to get on first.

The man then told one of the passengers to grab his wife while he lifted her up.

He grabbed onto her legs and lifted her up while the passenger helped. The woman used the side of the bus for leverage. 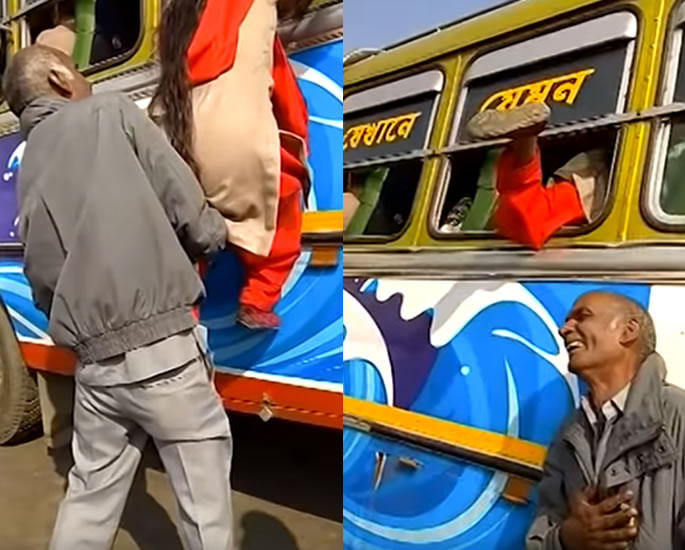 As the woman got close to the window, her husband let go and the passenger pulled her in.

After successfully managing to get his wife on board the bus, the man turned and leaned on the side of the bus, laughing at what he had just done.

Meanwhile, someone filmed the incident and was laughing throughout.

The man who filmed the incident jokingly told the husband that everyone is waiting to get on the bus while he just shoved his wife through the window.

The man later got on the bus after the passenger offered to help him.

Watch the Man lift his Wife into the Indian Bus here: 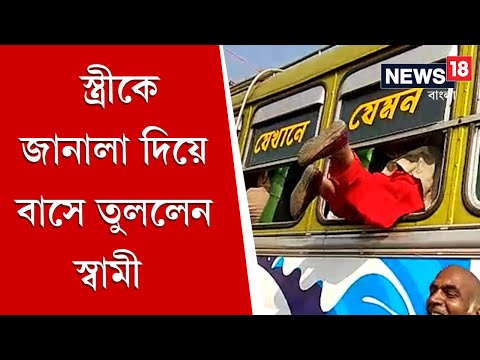 Dhiren is a journalism graduate with a passion for gaming, watching films and sports. He also enjoys cooking from time to time. His motto is to “Live life one day at a time.”
Suspicious Indian Husband kills Wife, Baby & Man in Room
Man beat Ex-Wife’s Counsellor & caused Serious Head Injury