A groom crashed a £200,000 Lamborghini on his wedding day. He had taken the supercar from a guest without permission.

"three people ended up in hospital."

Ali Zaman, aged 26, of Bradford, received an 18-month community order after he crashed a £200,000 Lamborghini he had taken without permission on his wedding day.

The incident resulted in Zaman, his new wife and another driver being injured. The car also burst into flames.

Bradford Crown Court heard that a wedding guest had securely parked the Lamborghini Huracan outside a venue on February 15, 2020.

The keys were inside the man’s coat pocket.

But when he was about to leave the venue, the keys were no longer there.

The guest thought Zaman had taken the green Lamborghini and tried to call him.

The car’s insurance policy allowed anyone with permission and over the age of 30 to drive it. But Zaman “did not meet any of those criteria” and had no third party insurance.

Mr Recorder Richard Wright QC said the groom was driving “perfectly” reasonably “most of the time” until he came to a set of traffic lights on Wakefield Road.

He “macho postured” with another driver, before speeding off and colliding with the vehicle.

The Lamborghini burst into flames and both vehicles involved in the crash were “write-offs”.

Zaman and his wife suffered minor injuries while the other driver suffered an eye injury that required stitches.

Zaman’s defence lawyer said his client wanted to apologise to the other driver and also to his own wife.

He said: “This was his wedding day and three people ended up in hospital.”

Zaman accepted that “he had no right to be in the vehicle” and speeding up in the midst of a storm was dangerous.

He added: “He will now lose his good name.” 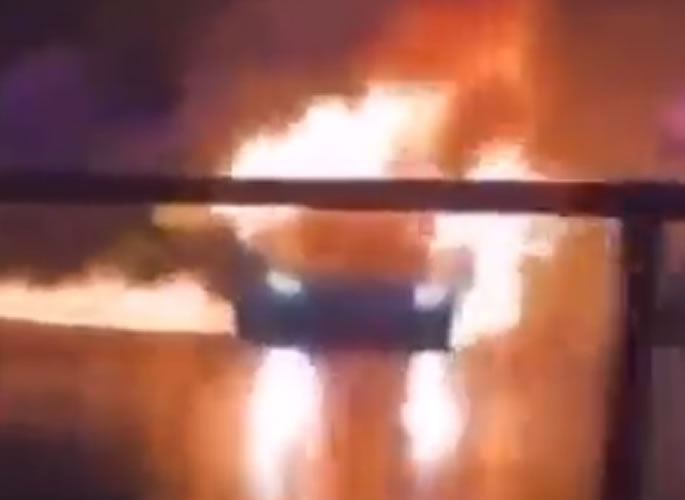 Mr Wright responded: “He will lose his good name, but won’t lose his liberty today.”

But Mr Wright said Zaman was not found guilty for the latter charge.

In mitigation, Zaman’s lawyer said his wife does not drive and their young child has to be taken to nursery and other social events.

Mr Wright said: “It was your wedding day, you will remember it for all of the wrong reasons because it ended with you making a reckless and stupid decision to drive around a Lamborghini motorcar about the streets of Bradford.

“You were macho posturing with another motorist at the side of the traffic lights in what were treacherous road conditions.

“You set off like the clappers, reaching excess speed close to 90mph, before losing control, crashing your car and bringing injury to your new wife and injury to the gentleman at the lights.

“It was a moment of complete stupidity on your part and the consequences of it could have been far more serious.”

Zaman was initially set to receive a prison sentence but Mr Wright decided not to hand him one due to his good character references and describing the incident as a “moment of madness”.

Mr Wright added: “You’re perhaps lucky your wife decided to stick it out with you with the way your wedding turned out.”

Zaman was sentenced to an 18-month community order and must complete 180 hours of unpaid work.

He was also banned from driving for a year and ordered to pay a victim surcharge.

Dhiren is a journalism graduate with a passion for gaming, watching films and sports. He also enjoys cooking from time to time. His motto is to “Live life one day at a time.”
Man Jailed for Killing Grandfather with Stolen Car
Tory Treasurer set to Make Millions from LV sale