Upon the revelation of her groom’s illness, an Indian bride burst into anger and decided to marry her wedding guest instead. DESIblitz reports.

Plates and cutlery were reportedly used as weapons to threaten Indira to take back Jugal.

A young Indian bride married her wedding guest in anger, as her groom-to-be suddenly fell ill during their Hindu wedding in Rampur, India.

Indira was not pleased, to say the least, when Jugal Kishore suffered from an epileptic fit and fell to the ground in the middle of the varmala ceremony of their wedding.

The 23-year-old bride and her family were allegedly furious at the unexpected episode. It shocked them to the core that Jugal’s medical condition was hidden from them prior to the wedding.

As the 25-year-old groom-to-be was rushed to the hospital for immediate treatment, Indira announced in her rage that she would ‘happily marry someone else at the wedding’.

Some media reported that one of the wedding guests, Harper Singh, stepped up and voluntarily offered to tie the knot with the distressed bride. But some claimed that it was Indira who chose Harper to be her new groom. 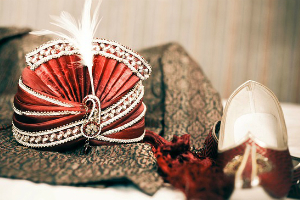 It was revealed later that Harper is actually her sister’s brother-in-law, suggesting they may have known each other before the wedding.

However, any suspicion around romantic links between Indira and Harper can be dismissed.

Apparently, the new groom was hesitant and ‘taken aback by the strange situation’.

Casually dressed in leather jacket and jeans, Harper continued the varmala ceremony with Indira and went from being an onlooker to the centre of attention.

After returning from the hospital, Jugal and his family tried to reverse the course of what was meant to be the happiest day of his life.

Jugal pleaded with Indira that returning home without a bride would ruin his dignity. He believed there was no way he could face his family and friends and desperately wished for Indira to change her mind.

Things took a violent turn when the abandoned groom’s relatives joined in. Plates and cutlery were reportedly used as weapons to threaten Indira to take back Jugal. 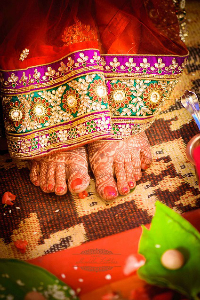 But the new bride remain unmoved and chose to stay married to Harper.

The Milak police station in Rampur had to intervene and arrested several guests involved in a fight before peace was restored.

Arranged marriages are very common in India. Any attempts to hide information about the bride and groom from each other is often met with disdain.

Forum user aishaahmedm sympathised with Indira and strongly believed Jugal’s concealment of his illness was an indication of bad character.

Aishaahmedm wrote: “Having a disease is not wrong. Hiding it and tricking someone into marrying you is wrong. If the guy and his family were hiding this, what else would they have hidden?

“I personally know…a neighbour who was tricked into marrying a bipolar man without having any knowledge about his disease or the extent of it.”

aishaahmedm continued: “And another girl who found out after marriage that her husband had a seven year old kid from a previous marriage.

“While what this woman did i.e. marrying a random guy was ridiculous she had every right to break off the engagement.”

The Station House Officer of Milak police station, RP Solanki, said: “Both families have [now] amicably resolved the matter. The complaints have been withdrawn.”

He also confirmed that Jugal and his family have accepted the unfortunate outcome and returned home to Moradabad.