Goodness Gracious Me actor Sanjeev Bhaskar and other celebrities call for better awareness of stroke among South Asians in the annual PHE ‘Act FAST’ campaign.

Sanjeev Bhaskar's father had suffered from a mini stroke in the past.

A recent PHE survey found that only 45 per cent of respondents would call 999 if they experienced the symptoms of a mini stroke.

The latest campaign aims to get people to pay attention to early warning signs of mini strokes and ask for medical help.

It specifically targets South Asians, because the community is at twice the risk of suffering from strokes than the general UK population.

As a well-known actor within the British Asian community, Sanjeev is a suitable candidate to promote the campaign. But it is his personal experience that makes him a relatable ambassador. 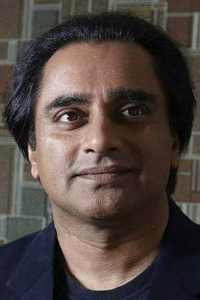 DESIblitz finds out that Sanjeev’s father had suffered from a mini stroke in the past.

It is no doubt more effective for those who understand the shocking experience and caring process to warn others of the risks.

Sanjeev said: “Family is a really important part of my life, and when a family member has a stroke, it can be devastating for the patient and the rest of the family.

“As a community we have a higher risk of stroke than the general population so knowing the signs to look out for is crucial for us.”

He stressed: “If you or a family member experiences any of the symptoms of a mini-stroke or stroke, please call 999, take immediate action – don’t put it off till tomorrow – it could save a loved one’s life.”

Emmerdale actor Bhasker Patel is also one of the campaign supporters.

He said: “As someone who is at higher risk of having a stroke because of my ethnicity, age and gender, I can only stress that if you have any of the symptoms, please don’t let male pride or fear get in the way of getting help.”

South Asians are at double the risk of strokes because risk factors, such as high blood pressure and diabetes, are common among the ethnic group.

“Asians are predisposed to suffering from stroke because their genetics not designed to live and work in the cities.”

Though it is common among the elderly, he emphasises ’25 per cent of strokes happen to people under the age of 65′.

While a full stroke – caused by a disruption of blood supply to the brain – can result in disability, a mini stroke should not be underestimated.

The symptoms of a mini stroke are similar to a full stroke, but they last for shorter.

However, if not treated immediately, there is a 20 per cent chance the patient will have a full stroke within a matter of days.

Here is how you can ‘Act FAST’ and save you and your family’s lives:

Speaking to DESIblitz, Professor Kenton highlights how PHE has tailored their resources to cater for the South Asian ethnic group.

He said: “There are particular resources which have been developed for South Asian groups in the relevant languages.

“We have worked with various partners to ensure that we have relevant case studies as well as resources for the South Asian communities.”

The campaign will run nationally until March 1, 2015. Since launching in 2009, it has saved over 4,000 people from becoming disabled as a result of stroke.

Call the Stroke Helpline on 0303 303 3100 or visit the Stroke Association website to find out more.

Scarlett is an avid writer and pianist. Originally from Hong Kong, egg tart is her cure for homesickness. She loves music and film, enjoys travelling and watching sports. Her motto is “Take a leap, chase your dream, eat more cream.”
Angry Indian Bride dumps Groom for Guest
Uncle and nephew jailed for £35m cannabis empire