A 22 year old woman delivers a baby in a train toilet in India. The baby survived even after falling through the toilet onto the tracks. DESIblitz has more.

"They had not expected that the newborn would be alive."

On February 15, 2014, a pregnant young woman – Manu  – was on board the Barmer Kalka Express from Suratgarh to Hanumangarh in Western Rajasthan, India when she delivered her baby in the toilet.

She fell unconscious during labour and did not realise that her newborn had slipped through the toilet and onto the tracks:

“The woman… felt acute labour pain, so she went to the toilet to relieve herself and gave birth to a baby boy who slipped down through the toilet bowl and fell on the tracks,” remarked senior railway police officer, Subhash Vishnoi.

Fortunately, the train was not running at the moment. It had stopped briefly at the Dabli Rathan area, a few miles away from the Hanumangarh Station.

A guard at the Food Corporation of India warehouse heard the neonate cry and immediately notified the local railway officers at Dabli Rathan. 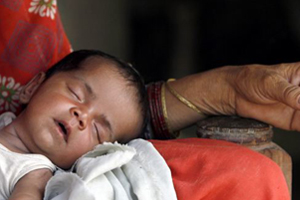 Thee railway officers relayed the information to the local police at the Hanumangarh Station who rescued the newborn.

Like most train lavatories, toilets on Indian trains empty directly on the railway tracks through chutes. There are both Western toilets and squat toilets.

Manu’s mother, who was travelling with her when the incident took place, discovered her in an unconscious state.

The young mother seemed to have fainted due to heavy bleeding and intense labour pains.

The mother and child were attended to at the town hospital immediately after they were rescued. They are in good health.

Tarun Jain, a North-West Railway spokesman said: “Once the train reached its destination, the mother was admitted to Hanumangarh town hospital.

“After being rescued, the baby was initially taken to the local hospital where he was given first aid. He was also later shifted to the town hospital.”

The child is a little below the standard weight and is under observation at the town hospital’s neonatal care:

“He is underweight, he weighs only 2kg (4.4lb), and we are keeping him under watch,” Dr Bijrania said.

Police Official, Ram Singh later added: “When the woman and her husband found their newborn alive and safe, they were very happy. They had not expected that the newborn would be alive.” 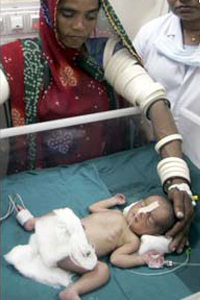 The miraculous birth is not an uncommon incident in India.

In 2008, near the Gujarati capital of Ahmedabad, a young pregnant woman named Bhuri unexpectedly delivered a premature baby on board a running overnight train.

In another incident in 2013, Rehani Bibi was on board the Lalgola passenger train when she gave birth to a baby in a train toilet. The baby slipped onto the tracks.

Her cries led other travellers to engage the emergency stop and the baby was rescued thereafter. The baby miraculously survived with no marks or injuries whatsoever.

In May 2014, a 3 month old infant on board the unfortunate Diva – Sawantwadi train survived a train derailment.

Sadly, the Indian baby lost its mother in the accident. Its father was in a critical condition while its sisters were admitted to a Mumbai hospital.

Young mother Manu and her newborn son are very lucky to survive the train birth, and are now recovering in hospital. They are both said to be doing fine.