Girl Zero by A. A. Dhand ~ A Compelling Crime Thriller

Offering a fresh perspective on the genre of crime thrillers, A. A. Dhand continues to impress with the second book in his DI Harry Virdee series, Girl Zero.

"I wanted to create characters who hadn't been seen before."

Set in the eerie streets of Bradford, A. A. Dhand adds a compelling second book to his Detective Inspector (D.I.) Harry Virdee series, Girl Zero.

Girl Zero is the follow-up to his debut novel, Streets of Darkness. It was this book that revealed the complex character of Harry Virdee for the very first time.

A man on a mission, Harry is a strong-minded individual whose focus cannot waiver. The commitment he has to his work and family makes him a character many of us can relate to.

However, his adventurous streak exposes his attraction towards life on the edge and willingness to do whatever is required to succeed. Testing the limits as much as he can, his decisions add an element of thrill and suspense to the story.

As Harry discovers the death of his beloved niece, an increasing sense of tension looms over the city of Bradford.

Not only is there the inevitable sadness that follows any death, but the loss of a loved one causes an unexplainable pain that spurs Harry on in his search for the killer.

Deviating away from traditional crime thrillers, A. A. Dhand skillfully embeds different story lines into the book, allowing the reader to watch as each distinct aspect intertwines with another to reveal an unexpected ending.

Touching on the topics of undying love, family betrayal, cultural issues and religion, A. A. Dhand carefully provides each character with a rich history.

Dhand also takes care to steer away from the typically negative portrayal of Bradford as the series emphasises on telling a story that goes beneath the surface.

We are able to follow Harry’s physical journey to the killer, whilst also understanding his ongoing thoughts regarding his family and own ethical values.

He faces an ongoing battle with his Sikh family from which he was disowned due to his marriage to his Muslim wife, Saima.

Toying with two conflicting ideas, he is forced to decide between handing in the killer for his criminal brother to deal with or following police protocol.

The thought that the former could lead him into the warm arms of his family is prominent. However, there is always a subconscious reminder that it is not just about his hope for reconciliation, but also his integrity as a D.I.

He would bring justice either way, but the method by which he would achieve this remained highly dependent upon his motive. 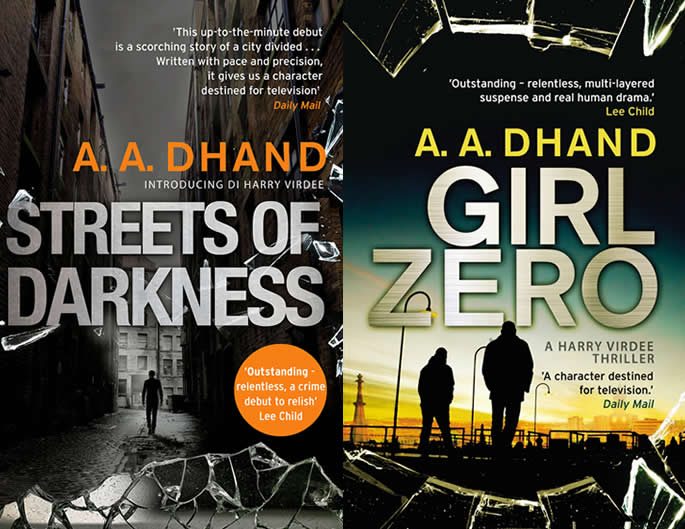 A. A. Dhand ~ A Compelling Storyteller

A. A. Dhand’s  debut book, Streets of Darkness, was welcomed into the literary world with great praise. With television rights sold before the book’s publication and comparisons made to the likes of HBO’s The Wire, Dhand certainly left a lasting impression.

Initially pursuing a career as a pharmacist, the author refused to neglect his passion for writing.

Taking the time to perfect his craft, he has been able to incorporate the traditions of culture and the modernity of life today. Thus successfully providing a fresh perspective, not only on Bradford but also the genre of detective fiction.

His determination to write fiction that is both engaging and relevant has certainly paid off. Dhand successfully keeps the reader gripped as he sequentially unravels the identities of each character throughout the book. This increasing level of depth allows us to re-live each moment for ourselves.

Not only does he capture us with his cleverly curated plot, but his effortless writing style cannot go unnoticed. The imagery that laces each page of this book is enough to create vivid depictions of the events that occur.

Explaining the thought process behind the characters of his first book, Streets of Darkness, he tells The Guardian: “I wanted to create characters who hadn’t been seen before.”

Continuing with this same approach for Girl Zero, British Asian author A. A. Dhand successfully produces characters that are unique in their own right.

He takes care to include emotional content, allowing us to empathise with each character. Taking us into their troubled pasts, he offers a justification for the questionable decisions they make throughout the book.

Ali, in particular, is an extremely intriguing character. His unusual lifestyle and somewhat psychopathic ways will cause you to almost question A. A. Dhand’s imagination.

However, as he further reveals layers of Ali’s past, he explains away our initial judgments of Ali’s behaviour.

This demonstrates the ability of A. A. Dhand to create a multifaceted character with great ease.

Overall, the book is a fantastic read, whether you’re a lover of crime stories or not. With a captivating search for a murderer underlined by deceit, love and religion, A. A. Dhand’s creative writing is sure to keep you hooked.

Girl Zero by A. A. Dhand is available for purchase now.

Priya is a Psychology graduate who is passionate about fitness, fashion and beauty. She loves keeping up to date with the latest news on health, lifestyle and celebrities. Her motto is: “Life is what you make it.”
8 Incredible Pakistani Poets you Must Read
5 Poems of Shakti Chattopadhyay you Must Read