After a 150 year old ruling gets over-turned, rights for Gays in India are legalised. But not everyone is happy about the new legislation.

There are very mixed views about this legalisation

In our Desi Marriages of Convenience article it was highlighted that one of the main reasons these type of marriages were taking place was due to gay people in the South Asian communities finding a way to sustain their sexual orientation whilst being ‘married’ in society.

Particularly, in India, where there is a large gay community. But the difference between the UK and India is that, in the, UK homosexuality has now been formally recognised due to the enactment of the Civil Partnership Act 2004, which gives same-sex couples the same rights as opposite sex- couples, apart from marriage. In India being gay was a criminal offence, which held punishment if found out.

This was a major problem because many homosexual relationships were being conducted underground, which basically led to increasing number of STDs (sexually transmitted diseases), people fleeing from home, abuse, violence and even death.

However, on 2nd July 2009, India added another bookmark to its long history. Homosexuality has been decriminalised by the Delhi High Court.

The Delhi High Court stated that gay people were being deprived of their equal rights as individuals and there human rights were being violated. India has become the 127th country to legalise homosexuality. 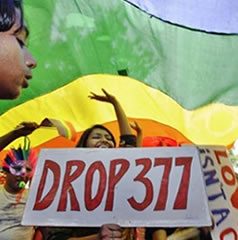 This ruling replaces a rule nearly 150 years old, which was laid by the British Colonial system from 1860. The offence was placed under Section 377 of the Indian Penal Code where it criminalised sexual activity “against the order of nature.”  The section included same-sex relationships among consenting adults.

Scenes outside Delhi High Court, gathered large numbers of gay people over joyed at the news. This has been a long hard battle to win but finally India has recognised this particular social group.

The battle goes back to 2001, where The Naz Foundation Trust (a non-governmental organisation fighting against the spread of HIV/sexual health) has been pushing for the law to decriminalise homosexuality. A petition to the High Court to decriminalise homosexuality was refused in 2003. The Naz Foundation pursued it to the Supreme Court who sent it back to the High Court to reconsider the petition.

After a long delay, on 7 November 2008 the India’s Health Ministry finally came out in the public and supported this petition to legalise homosexuality whilst others opposed. In June 2009, India’s new law minister Veerappa Moily also agreed that the section 377 Penal code was outdated and needed revising.

Interestingly, since the ruling, the first (could be classed as) gay marriage took place in Chandigarh. Where two men got “hitched” in a local temple despite resentment by both men’s families. 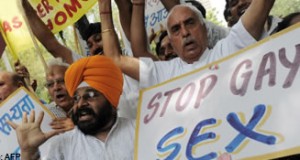 There are very mixed views about this legalisation. Obviously for gay people this is good news. For some of the general public it is seen as a step towards globalisation and a step forward for India. But there are civil and religious groups heavily opposing the legalisation of gay rights in India.

Religious groups are particularly against the gay rights law. In a news conference held on Thursday, July 9th 2009; Mujtaba Farooq, the all India secretary of Jamaat-e-Islami Hind, Charan Singh Garanthi, head of the local guardwaras and James Ambildhage, representative of organisation of various churches, gathered together to clearly state that:

“India is a religious country where people believe deeply in religions they profess and we are united in opposing the unnatural act that the court has now legalised.”

They also argued that India’s strong cultural roots on family life will be destroyed and this legalisation is encouraging unnatural sexual activities.

Some celebrities in Bollywood welcome the decision. Celina Jaitley who has always supported the gay community was ecstatic about the ruling. John Abraham was also happy that gay people had finally acquired the same rights as everyone else.

Below are some videos showing you the reaction of people in India on legalisation of homosexuality: religious leaders giving their views on the opposition of this legalisation, a talk by Celina Jaitely on the rights of gay people, and the breaking news of the legislation.

Sandy likes to explore cultural areas of life. Her hobbies are reading, keeping fit, spending time with family and most of all writing. She is an easy going, down to earth person. Her motto in life is 'believe in yourself and you can achieve anything!'
Desi Marriages of Convenience
Sex and the British Asian Woman