Marriage for some people is a commitment, which they make to the person they love and want to spend the rest of the life with them. However, some people get married, not for love, family or a relationship but for other reasons.

One of these reasons is that those in the South Asian community attracted to the same sex cannot be open about it to their families due to the stigma attached in the culture of  ‘being gay’ and its non-acceptance.

Being homosexual in the Desi culture is a major struggle between family and child. Many parents turn a blind eye and are convinced their son will ‘grow out of it.’

Many guys once they come out, are disowned by the family because it is seen as bringing disrespect and shame on the family. And some parents get them married to the opposite sex hoping that they will become ‘straight’ once they are married.

Asian gay females are treated appallingly due to their sexuality. Again, it depends on the country you live in.

In India, lesbians are treated very harshly. If two lesbians are found to be residing with each other they can be forced out of the accommodation. Some girls find that due to their sexuality at school, they can face expulsion if they are found out. Lesbians can suffer by being disowned by the family, outcast by the area they live in, beaten up and even killed.

This leads to such relationships being led underground and out of sight or suspicion.

Rather than be open with the family, majority of such gay people will actually marry someone of the opposite sex just to please the family and to ease the pressure off them. In essence, some marry to please the family but live another life in private to fulfil their own satisfaction and needs.

On the Internet there are websites, where South Asian gays and lesbians seek each other to enter into a marriage of convenience or a ‘MOC’ as they are called. This is seen as a ‘safe’ option for many gay Asians.

There are MOC websites like saathinight.com (example link), peperonity.com and Gay Bombay Group, which have marriage adverts from gay people to search their ‘convenient’ marriage partner.

Here is a quote from one of the adverts submitted by a gay female, which gives you an idea of how such marriages are being mutually agreed.

“I am looking for a “spouse”, a gay male, very out and comfortable about his sexuality. I would want this individual to be respectful of my girlfriend and I. I would want an individual who has similar motives for entering into such a contract. I would only want this to be a working marriage. This means a marriage that appears to be “working” whenever my parents or family inquire into our lives.”

But it is not just being gay, which causes people to enter into convenience marriages. Marriages of convenience are often contracted to exploit legal loopholes of various kinds. One prime example is people marrying to stay in the UK or other Western countries. These are also known as sham marriages.

This type of marriage of convenience involves two people agreeing to marry due to a contractual arrangement between the parties and their families. Usually the agreeing party, which is often the women, receives payment in return. The marriage could be for the person to gain permanent residence in the country where the agreeing party lives or to reduce the risk of being deported back to a home from that country.

In the USA, women enter into marriages of convenience for Desi men to obtain a Green Card. However, there have been stories where the women exploit the situation whilst the man awaits 2 years for his card by asking for more money.

Sham marriages seem to be a big problem in Canada, mostly for people coming from India. These people are enter into such a marriage, get permanent residence and then divorce the contracted partner. 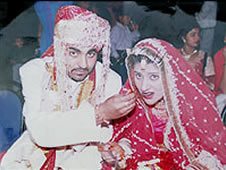 The ceremonies often take place abroad in India, where, at a price, you can get packaged services with a wedding ceremony where people stand in as guests and relatives, posing for photos as in a real marriage.

This matter came to attention when Canadian immigration officials in New Delhi began to notice the same guests appearing in photos of different weddings submitted as evidence for sponsoring overseas brides and grooms to Canada. To crack down on the problem the government is sending investigative teams around the world, especially to high-fraud regions such as India, China and Vietnam.

A major case in the UK is that of Jaswinder Kaur Gill, who was jailed for 10 years in 2005 for arranging sham marriages. Gill was paid up to £14,000 a time to find brides for Indian men who wanted to use the marriage as a passport to Britain. Gill told a series of drug addict British women that they would be taken to India to work in modelling and beauty work, but once there, were persuaded to take part in weddings, prosecutors said.

So, two typical types of Desi Marriage of Convenience do exist. For the gay aspect of such marriages, the cultural challenge to get people to admit it happens and open their minds to discuss the matter is enormous. Will such ways of life ever be accepted by South Asian communities? Are marriages like these likely to increase?

And as for the illegal and contractual marriages taking place for residency, are the authorities getting better to stop the increase of such marriages? Or is the problem already out of control?

Sandy likes to explore cultural areas of life. Her hobbies are reading, keeping fit, spending time with family and most of all writing. She is an easy going, down to earth person. Her motto in life is 'believe in yourself and you can achieve anything!'
‘Living In’ a Growing Indian trend
Gay Rights in India