Father-of-Three dies after Complaining of Backache

A father-of-three from Leicester has suddenly passed away after going to the hospital, complaining that he had backache.

A father-of-three has tragically died suddenly after going to the hospital for backache.

Just hours before he passed away at Leicester Royal Infirmary on August 11, 2021, Jagadeesh Kovval was seen smiling for a family picture.

The 49-year-old from Leicester had suffered a cardiac arrest which came following a lung infection that spread into his throat.

He leaves behind a wife, an 11-year-old son and two daughters, aged seven and 17.

At around 1 am, Jagadeesh, also known as Jag, was taken to hospital after complaining of backache.

His best friend Bobby Singh worked with Jag at Shimla Pinks restaurant. Bobby said that he and the family are in “utter shock and disbelief”.

“After doing tests. The doctors said it was a lung infection that had spread to his throat.

“They told me he started coughing up blood and went into cardiac arrest.

“He died just hours later. We are all just heartbroken.”

According to Bobby, it has not yet been confirmed whether the death was Covid-19 related. The coroner is now conducting an investigation.

He continued: “Jagadeesh was a wonderful friend, father, husband, brother who touched the lives of those around him.” 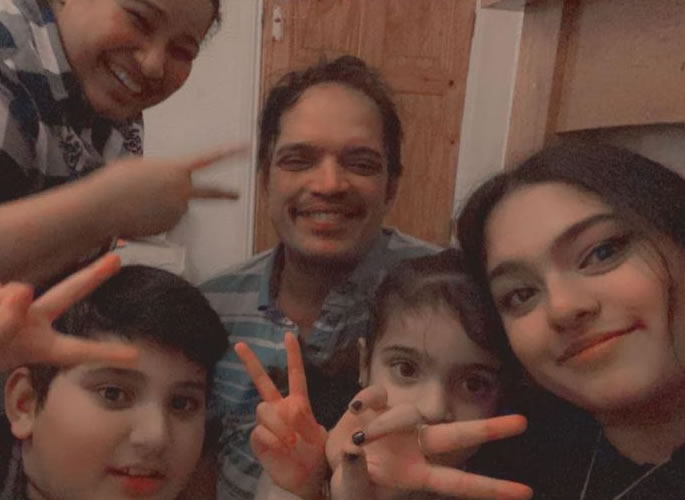 His wife Thushara is from India and does not speak any English. This has meant she has been unable to work whilst caring for her three children.

After his death, the family could not pay their WiFi bill.

This meant they could not contact their family back in India to inform them of the tragedy.

Bobby, who now owns a Nottingham restaurant, ‘4550 Miles from Delhi’ stepped in to help them through their struggles.

In order to help the family, Bobby set up a GoFundMe page.

He said: “I feel like it is my responsibility to help them.

“I paid for their internet bill and brought them food but they really need more help.

“One day they had a husband and father and the next day he was gone.”

“I do not want the children to suffer – to not be able to eat or do activities.

“They have to be able to have lives of their own after this tragedy.

“I am so grateful to everyone who has donated so far. I can’t thank you enough. I just hope anyone that can, will help.”

One friend wrote: “Sending regards to the family at this difficult time.”

Another tribute read: “What a terrible shock. Prayers to his family.”

A third said: “Rest In Peace and Let god keep this family strong.”

Dhiren is a journalism graduate with a passion for gaming, watching films and sports. He also enjoys cooking from time to time. His motto is to “Live life one day at a time.”
Trainee Solicitor banned after Stalking Woman
Indian Man arrested for Drowning Baby Boy in Water Tank