Three stabbed to Death after Clash between ‘Sikh Groups’

Police have said that the shocking stabbing incident in Seven Kings, which left three dead happened after a clash between Sikh groups.

“A fight has taken place which has escalated"

Three men were stabbed to death on January 19, 2020, in Seven Kings, Ilford. Police believe it was the result of a clash between Sikh groups in what has emerged as an argument over money.

Police responded to reports of a disturbance in Elmstead Road at 7:38 pm.

They arrived to find three men with stab wounds. All three were pronounced dead at the scene by London Ambulance Service paramedics.

The victims are believed to be aged 22, 26 and 34 and have been identified as Harinder Kumar, Narinder Singh and Baljit Singh.

Two men, aged 29 and 39, have since been arrested on suspicion of murder.

It was revealed that the victims were builders from India. The two suspects were also from the Punjabi Sikh community. 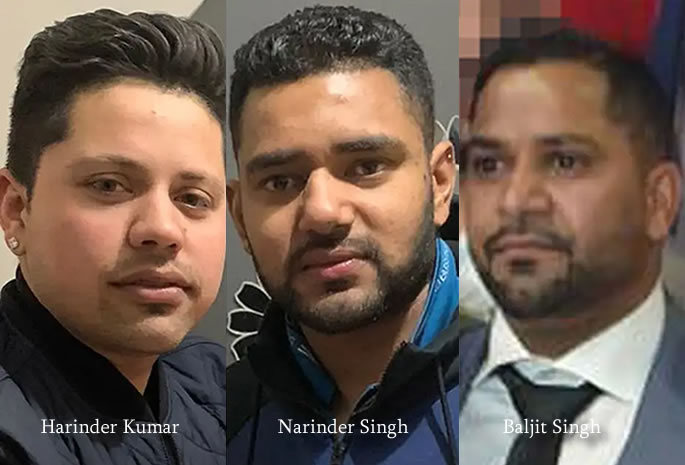 One man was stabbed in the neck, shoulder and chest, while another was found having been bludgeoned in the head with a hammer.

A victim was heard shouting: “They killed me, help me!”

All three were later found covered in blood.

On January 20, Chief Superintendent Stephen Clayman said the suspects and the victims were all known to each other.

He said: “We believe the groups involved are members of the Sikh community.”

In a later statement, he said: “A fight has taken place which has escalated, resulting in three people being fatally attacked.

“It was a horrific scene for anyone to come across and my heart goes out to the families and those affected by it because it is unprecedented to have something like this.”

According to a local businessman, the men were stabbed after a large group of Indian men came out of the nearby Delhi O Delhi restaurant, screaming and shouting.

Mr Pali, who is well known in Ilford, said that the men had been drinking whiskey all afternoon and an argument had broken out over unpaid work.

He explained that the three victims were among 10 men who were inside the restaurant.

Mr Pali told the Daily Mail: “The argument was all over money for unpaid work. That happens a lot around here because we have a lot of immigrants from India who work as builders.

“They started arguing inside the restaurant and were very drunk. They had been drinking whisky for several hours. The row was all over some of the group being angry at the others over the fact that they had not been paid for a job.

“The argument then continued as they came out of the restaurant. You could hear lots of screaming and shouting and then all hell broke loose with one of the men pulling out a knife and attacking the others.”

Residents have been left shocked by the triple stabbing and have now called for more CCTV and an increase in neighbourhood policing. 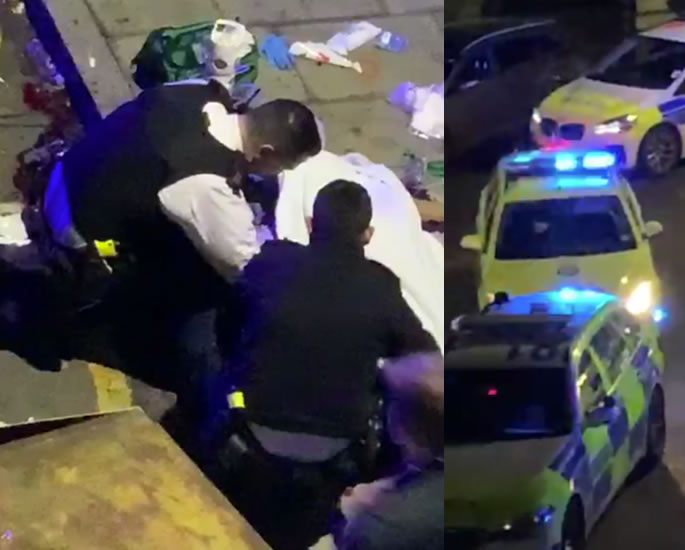 One neighbour said: “I think they all live around here.

“I wouldn’t say they live that far because I’ve seen them before.

“My husband went to get groceries and he came back and said there were three people dead – we thought they were dead because there was so much blood. Literally puddles of blood.

“I saw each and every one of them. I was on the phone to the ambulance. There were loads of people trying to help them.

“Police came and they were giving CPR. It took a while for the ambulance to come.”

“The neighbour called for CCTV and lighting to be installed by the railway station.

“This area is a crime hotspot. There’s broken bottles all the time. I don’t feel safe at any time of the day there.

“This is more of a shock. I’m not surprised that they died because there was so much blood. The ambulance took about 20 minutes to arrive. Police were really trying.

“I’m shocked but not surprised that this has happened. They need CCTV and lights there.”

Another resident said: “It’s shocking. We use the stairs to get to the station. The wife is scared to go there.

“It’s always a trouble spot. We have CCTV everywhere but there. It should be there. A lot of youngsters go there.” 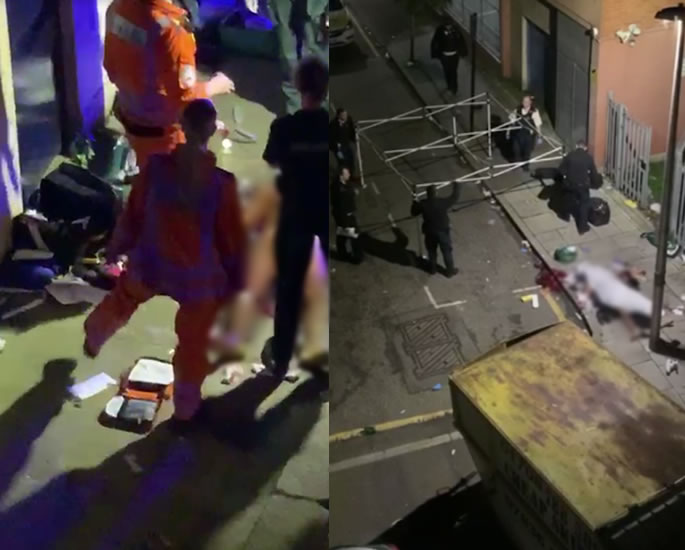 A police cordon was in place outside Seven Kings railway station. Chief Superintendent Clayman broke down the events involving the Sikh groups.

“The incident happened at around 7:40 pm last night. We know that it started near Seven Kings Rail Station and then moved to Elmstead Road.

“It was a coming together of two groups of men, the result of which was that three men were fatally stabbed.

“Despite the best efforts of paramedics at the scene they were pronounced dead at the scene.

“This was a devastating incident.

“I can update though that overnight the teams have been working hard and there have been two arrests – two men have been arrested.

“They are around 29 and 39 years old. I can’t give any more details than that at the moment but there are two men in custody.

“We believe the parties are known to each other and that the parties are members of the Sikh community, so we have spent a lot of time this morning trying to allay the fears of the community and make sure that there is reassurance provided, certainly from us locally.”

Councillor Jas Athwal, of Redbridge Council, said in a statement:

“What happened in Seven Kings last night is truly devastating for all of us.

“Three young men, who had their whole lives ahead of them, have tragically died.”

“Our heartfelt thoughts and prayers go out to the families of those young men, and the entire community.

“An incident like this is unheard of within the Sikh community here in Redbridge.

“I think tragically there are at least three families who are going to be in mourning and this is going to last a lifetime for the people left behind.

“We’ve got to look at the causes of why this happened and address those.”

He went on to criticise the footage of what appeared to be the aftermath being shared on social media.

“I think the first response should be ‘What can we do to help?’. To put it on social media is not right.”

The Ilford Recorder reported that one of the victims was named as 26-year-old construction worker Narinder Singh. Another was identified as Harinder Kumar, aged 22.

Navjot Kumar said that Harinder was his cousin. He explained:

“We’ve been calling relatives in India to tell them what happened. Harinder was a lovely, fun guy who was best friends with Narinder, who was also killed.

“They both worked as builders and had only been in the country for about three years. Sunday was Harinder’ s one day off in the week.

“He knew all the other men that were there when he was killed. They all worked and socialised together.

“They’d been out drinking like they normally do on a Sunday. I’ve heard that they got into a row over money.

“Some of the family got a call on Sunday evening saying Harinder had been attacked.

“They rushed down there but couldn’t get close as the police had sealed the area off. They were screaming and shouting his name but the police were holding them back. It’s heartbreaking what we are all going through.”

“We stand together against knife crime and will do everything we can to assist the police and support the community in the wake of this deeply tragic incident.

“I’d urge anyone with information about what happened last night to call the police on 101 and quote CAD6374/19JAN or contact Crimestoppers UK anonymously on 0800 555 111.”

Dhiren is a journalism graduate with a passion for gaming, watching films and sports. He also enjoys cooking from time to time. His motto is to “Live life one day at a time.”
‘Pakistani Hulk’ is on Search for Love but Reveals Struggle
Parents of 3-year-old Veer Urgently need Your Help