‘Pakistani Hulk’ is on Search for Love but Reveals Struggle

A man known as the ‘Pakistani Hulk’ has said that he is on the search for love but has admitted that it has been a struggle.

"I have been desperately looking for love"

Arbab Khizer Hayat, better known as the Pakistani Hulk has revealed that his search for a wife has been a struggle due to his sheer size.

The 27-year-old weightlifter weighs 70 stone and has said that he will not consider any women under 16 stone over his fear of crushing them.

Hayat has claimed that he has rejected up to 300 potential brides because they were too small. He has now increased his search for the perfect “heavyweight” match.

The man, who stands at 6ft 6, also said that his ideal partner needs to be a great cook in order to cater to his 10,000 calorie-a-day diet, which includes eating 36 eggs for breakfast.

The Mardan, Pakistan resident explained: “I want to meet a woman who weighs at least 220lb, and she has to be above 6ft4in tall, so we look right together.”

Hayat insisted that his future wife must look the part alongside him. He also believed that she needs to have a bulky frame as he fears squashing her if she is too small.

The weightlifter said: “I need a heavyweight wife so I do not hurt her. All the women who have wanted to marry me so far have been too skinny.

“My parents want me to get married. They want to have grandkids but I haven’t found the right match for myself.

“In the last seven years, I have been desperately looking for love, and have seen 200-300 girls, but they were all an average weight.

“I am 6’6 feet tall and weigh almost a tonne so it is not possible to look a normal couple with an average woman.

“It’s very important to me that we look right.”

Hayat typically eats three kilograms of meat, bowls of rice and bread, as well as drinking five litres of milk.

Despite the huge amounts of food, the Pakistani Hulk insists that he is healthy. 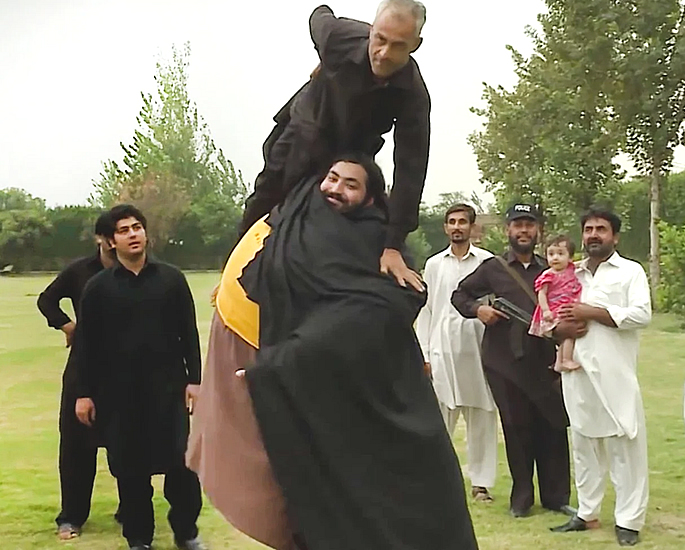 Hayat stated: “I don’t have any medical conditions. I am absolutely fit and comfortable with my weight.

“But I have to keep exercising and eating to become a world champion strong man.

“I started gaining weight in my teens but I realised that I wanted to get into weightlifting and strongman championships. So I continued to put on weight.”

Hayat is a star within his neighbourhood and across Pakistan, he is recognised as the world’s strongest man.

According to the Daily Mail, he achieved fame after viral videos showed him pulling a tractor by a rope as it tries reversing away.

Every day, hundreds of people turn up at his home so that they can take pictures with him.

On his fame, Hayat added: “I get a lot of love and admiration from the people here. But I don’t want to stop here. I want to become a world star.”