‘Emmerdale’ actress Paige Sandhu opened up about her struggle to find work prior to landing a role in the soap as well as her anxiety battle.

"Life was hard and a struggle.”

Actress Paige Sandhu has revealed that she battled anxiety for three years after struggling to find work before she joined Emmerdale.

She first appeared as nurse Meena Jutla in September 2020, but when Paige auditioned for the role, she was not aware she was about to be cast as a delusional murderer.

Emmerdale bosses even called Paige to double-check she was still up for the role, worried she would turn down the part once she knew her character’s evil nature.

On her audition, Paige recalled:

“I could tell that she wasn’t a good-hearted soul, but it was never mentioned that she was a killer.

“So when they phoned to tell me that I’d got the part they wanted to know if it was OK with me.”

But producers did not need to worry.

Paige continued: “I went ‘That sounds really great!’ She’s such an amazing character. She excites me.

“She goes to such dark places and she’s so different from me. It’s fun, I’m having the best time.”

Before joining Emmerdale, Paige’s only TV work was one episode of Endeavour and two of Doctors.

Her struggle to find work resulted in her battling anxiety for three years.

She said: “When I left drama school I was a very anxious person. I wasn’t getting any jobs and I was struggling.

“The anxiety took the form of insomnia. Life was hard and a struggle.”

In the ITV soap, Meena has so far pushed Leanna Cavanagh off a bridge and admitted killing best friend Nadine.

The murders were such a secret that Paige Sandhu and her mother were forced to hide it from her father.

She explained: “When my agent told me, my mum and my sister found out because I was on speakerphone.

“My agent then called back and said: ‘Paige, apparently it’s a secret.’

“It was too late with my mum and my sister, but I thought I would be in big trouble if it came out, so I didn’t tell my dad or my other siblings.

“I’m still not sure whether my dad knows my mum knew about it all that time!”

Paige was also told to hide her character’s nature from the rest of the cast, including Matthew Wolfenden, who plays love interest David Metcalfe.

Paige said: “He would get really annoyed.

On her character, Paige said: “She has no empathy for anyone.

“If killing again was the best way for her she would do it in the blink of an eye.

“She’s only just begun her reign of terror in the village and she could certainly kill again.” 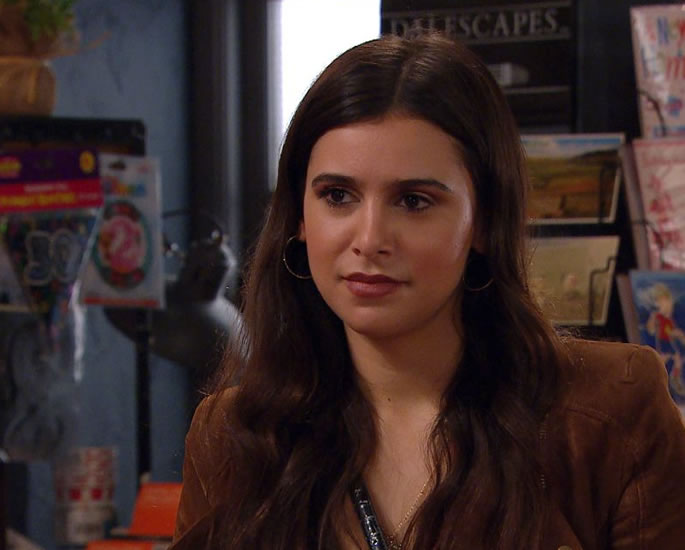 Users believe tapping pressure points on the head and face creates a balance in the body’s energy system and eases emotional distress.

Paige said: “I read a couple of books on it and found it really helpful.

“I’d tap on the train or bus on the way to auditions. People would give me the weirdest looks.”

Now, Paige is much happier but believes in the importance of looking after mental health.

She elaborated: “Just syncing my breath with the movement of my body and getting away from my thoughts can be really useful.

“I also read a lot of self-help books. I’ve trained my brain to focus on the positive rather than the negative.”

“So before the Emmerdale audition I didn’t let my brain think it was going to go badly. I just had this feeling that Meena was meant for me.”

Despite her character’s nature, Paige has been surprised at how many people like Meena.

“I purposely avoid Twitter and Instagram comments, because I thought I was going to get a lot of people who were angry at me… instead I’ve just had people loving her.

“They say: ‘I know I shouldn’t root for you but I’m rooting for you!’”

Paige Sandhu added: “My Nan watched Emmerdale before I got the job, so she was more excited than me.

“When I joined she kept saying to my Mum: ‘I love how light-hearted Paige’s character is.’ When all the bad stuff happened she went: ‘Oh! OK…’

“She wouldn’t have chosen for her granddaughter to be a killer!”

Dhiren is a journalism graduate with a passion for gaming, watching films and sports. He also enjoys cooking from time to time. His motto is to “Live life one day at a time.”
Randhir Kapoor reveals Tragedy of Losing 2 Brothers in 1 Year
Sofia Hayat says Karan & Salman ‘Promote Violence & Nepotism’