The east of Leicester was rocked by violence on September 17 as groups of young Asian men clashed in ugly scenes.

"We've had numerous reports of an outbreak of disorder"

On September 17, 2022, the east of Leicester was rocked by violence as groups of young Asian men clashed.

The trouble began after a group of young men started an unauthorised protest, which resulted in disorders breaking out in several areas, including Belgrave and Spinney Hills.

In a bid to calm the tensions, extra officers were drafted in.

At one point, officers formed two lines across Belgrave Road in a bid to put distance between rival groups.

Officers wielding batons could be heard shouting at people to “get back” as bottles were thrown and narrowly missed police.

The trouble came after a period of unrest between Hindu and Islamic communities in Leicester.

A march had been put together by two local individuals and was designed to be a peaceful protest following attacks on Hindus celebrating a festival.

These attacks saw people verbally abused and threatened with knives.

This subsequently escalated into civil unrest.

Videos circulated on social media showed cars being damaged, fights and scuffles breaking out and someone apparently tearing down a flag at a temple.

Police say they are investigating the incident.

“We’ve had numerous reports of an outbreak of disorder in parts of the East Leicester area of the city.

“We have got officers there, we’re taking control of the situation and there are additional officers en-route.

“Dispersal powers and stop-search powers have been authorised. Please do not get involved, we are calling for calm.”

A large police presence continues as well as a dispersal order, with officers urging people not to join the large crowds already on the streets.

Despite the clashes, officers made only two arrests – one for conspiracy to commit violent disorder and another for possession of a knife – but said several incidents of violence and damage had been reported. 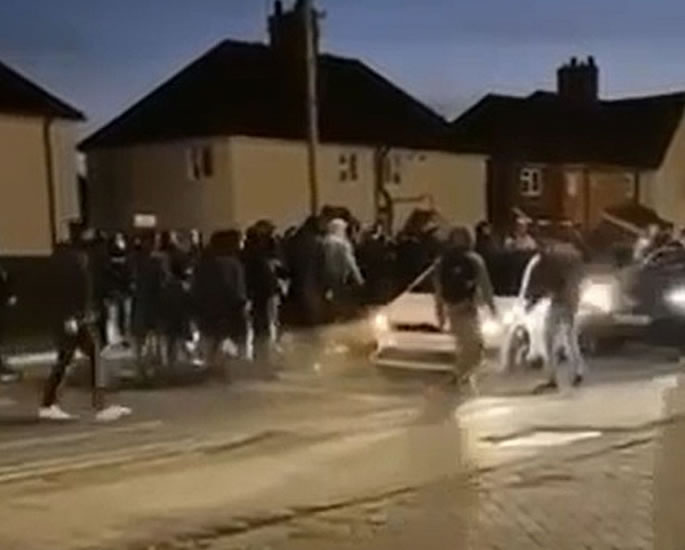 Fayyaz Suleman, of the Leicester Council of Faiths said:

“We are concerned about the escalation between groups of individuals with particular agendas and grievances.

“We urge people to be calm and united against any form of excitement.

“We also call for vigilance and cooperation with the police with any information on the perpetrators.”

“Faith leaders are united in our resolve to overcome this tense situation. More needs to be done to engage with the leaders of these extreme groups to establish dialogue and come to a resolution.

“We call for calm especially at a time of national mourning and for people to let the police do their job to keep our communities safe. There is no place for this in Leicester and I am confident that we will overcome this.”

According to Leicestershire Police, a significant operation is planned for the coming days.

They also continue to call for dialogue and calm.

Dhiren is a journalism graduate with a passion for gaming, watching films and sports. He also enjoys cooking from time to time. His motto is to “Live life one day at a time.”
Indian Woman beats Motorcyclist with Slipper
A Timeline of the Queen’s State Funeral