Icon of the fashion world, Oscar de la Renta sadly passed away on Monday 20th October, 2014. The designer had been battling cancer for 8 years. The 82-year-old dressed some of the biggest Hollywood and Bollywood celebrities including Freida Pinto at Cannes 2014.

"Oscar, it was an honour to wear your creations and to know you."

On Monday 20, 2014, American fashion lost one of its legends: the designer Oscar de la Renta.

The talented designer is most known for his work with the finest Parisian brands Lanvin and Balmain, before launching his eponymous label in 2003. He died on October 20, 2014, after 8 years of battling with cancer.

His first breakthrough came when he was hired to design a gown for the daughter of the U.S. Ambassador to Spain, after his wife saw some of his sketches. The dress then appeared on the cover of Life magazine. 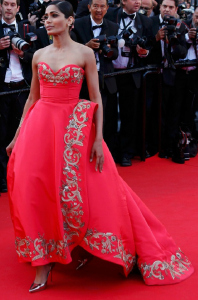 This experience was a catalyst for the development of his interest in fashion design, which culminated with an apprenticeship with the legendary Spanish couturier, Cristóbal Balenciaga. In the early 60s, he became a couture assistant at Lanvin in Paris.

After two years in Paris Haute Couture, the designer felt that his heart lay in Ready-to-Wear, saying: ”That’s where the money is.”

He was advised by Diana Vreeland, then editor-in-Chief of Vogue, to work for the house of Elizabeth Arden in New York. Meanwhile, he spent 9 years designing the Haute Couture collections at Balmain.

In 2003, he launched his eponymous label, which has quickly gained recognition for its bright colours, feminine silhouettes and innovative designs:

His achievements were also recognised by the Council of Fashion Designers of America (CFDA), when he received the Designer of the Year Award in 2000 and in 2007.

Oscar de la Renta’s designs have been picked by some of the most beautiful and powerful women in contemporary history – from First Ladies Jackie Kennedy, Nancy Reagan, Hillary Clinton, Laura Bush and Michelle Obama to the most glamorous Hollywood belles. 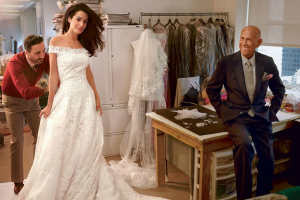 It was not just Hollywood who was in awe of his designs; Indian star Freida Pinto made an appearance at Cannes Festival, dressed in a breath-taking gown in coral with gold embellishment.

Most recently, the American designer created the wedding gown for Amal Alamuddin, the bride of George Clooney. Amal stated: ”George and I wanted a wedding that was romantic and elegant and I can’t imagine anyone more able than Oscar to capture this mood in a dress.”

American actress Sarah Jessica Parker, who wore a spectacular Oscar De la Renta piece at the 2014 Met Gala, called him a “beloved and resplendent” designer, while Naomi Campbell titled him “The Gentleman of Fashion” in her emotional tribute to the designer. 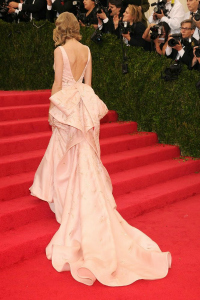 Grammy-awarded singer Taylor Swift said: “My all-time favourite designer has passed away. Oscar, it was an honour to wear your creations and to know you. In loving memory.”

The pop star dispersed romantic glamour at the Met Gala, dressed in a shell pink gown by the designer.

Hillary Clinton, who has also worn some of his creations, said: “We will miss Oscar’s generous and warm personality, his charm and his wonderful talents.

“My daughters and I have many fond ­memories of visits with Oscar, who designed our favourite clothes. We will always remember him as the man who made women look and feel beautiful.”

In both his professional and personal life, the designer have shared his positive outlook of life, which was reflected in his designs. Even when he was diagnosed with cancer in 2006, he did not lose his optimism.

”Yes, I had cancer. Right now, I am totally clean. The only realities in life are that you are born, and that you die. We always think we are going to live forever. The dying aspect we will never accept. The one thing about having this kind of warning is how you appreciate every single day of life,” he said.

“While our hearts are broken by the idea of life without Oscar, he is still very much with us. Oscar’s hard work, his intelligence and his love of life are at the heart of our company.”

“All that we have done, and all that we will do, is informed by his values and his spirit. Through Oscar’s example we know the way forward. We will make Oscar very proud of us by continuing in an even stronger way the work that Oscar loved so much.”

Undoubtedly, there is not a sentence that can better summarise the focal point of Oscar de la Renta’s creative path than his own exclamation: “My job as a designer is to make a woman feel her very best.”

He could not have done the job better.

Dilyana is an aspiring journalist from Bulgaria, who's passionate about fashion, literature, art and travelling. She is quirky and imaginative. Her motto is 'Always do what you are afraid to do.' (Ralph Waldo Emerson)
Highlights of House of iKons London 2014
Top 5 British Asian Fashion Bloggers