Highlights of House of iKons London 2014

The hugely successful House of iKons brought a unique slant to London Fashion Week by celebrating the new generation of global fashion talent. As official media partners for the Lady K event, DESIblitz has all the highlights.

"House of iKons is all about releasing the next generation of iconic designers."

Founded by the extraordinarily talented Lady K, under her Lady K Productions banner, the show drew in a fantastic crowd at the Hilton London Paddington on September 13, 2014.

Official media partners for the spectacular show, DESIblitz has all the highlights.

Hosted by TV presenter Johny Pach, the matinée and evening show welcomed the best of up and coming fashion talent from across the globe, with a special emphasis on the best of new and innovative fashion as one can expect from London Fashion Week. 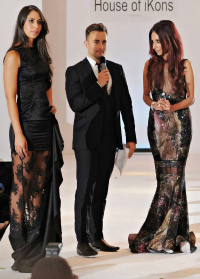 Speaking about the significance of iKons, Lady K said: “Basically the House of iKons is all about releasing the next generation of iconic designers.

With so much care and precision gone into ensuring that only the best would be on show, Lady K sought far and wide and brought to London designers from Oman, Dubai, LA, Egypt, Philippines and of course a few homegrown British talents.

Of those showcasing were Innu London which launched its ‘Summertime Fairytale’ collection for Spring/Summer 2015. With deep necklines and diagonal cuts, the collection of glamorous dresses were fun and quirky in vibrant colours of sunflower yellow, bright orange and turquoise.

Returning for a second year with Lady K was one of the highlights of the day, Leyla Rose. Taking inspiration from 1950s floral, with the added touch of her adorable 5-year-old daughter opening the show, the designer explained:

“My inspired icons are Audrey Hepburn because of the way she used to dress, Marilyn Monroe, Sophia Loren. So all these women that were just classy and I am trying to incorporate that style so that women can dress up.” 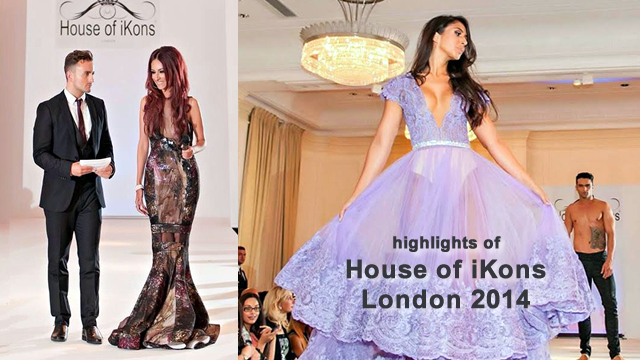 Also exhibiting for a second year was the extraordinary Albert Martincich. In 2013, he told DESIblitz that his collection was inspired by natural elements such as air and the sky, and saw beautifully flowing silks in grey and blue hues.

This year, Martincich opted for a different approach and used his designers platform to protest against the inhumane concern of poaching across the world.

Hailing from Bhopal, India, Sherin Mansoor brought a fusion of East and West to the House of iKons. Talking to DESIblitz, Sherin spoke about her inspirations:

“My father. He is an inspiration because he is also an artist and a designer and he always inspired me when I was a child,” Sherin tells us.

Sherin was also hugely excited to be part of the House of iKons, and admits that she tailor-made her collection to suit the London show: “I was so excited when I got the invitation from Savita Kaye, I just thought that I would do a mix of Indo-Western.

“So I just mixed with pure silk, tissues, and jamawar. All the materials are from India and I have done them with a Western designing.”

The House of iKons show is in support of the Prince’s Trust, which echoes its aim of offering a unique platform for young people who would otherwise have little access to the likes of London Fashion Week.

One of the surprises during show was 11-year-old Kasia Fallon who made her debut as a fashion designer by taking inspiration from her garden. Mixing together innocence and childlike simplicity, Kasia awed the audience and is definitely a young talent with a bright future ahead. 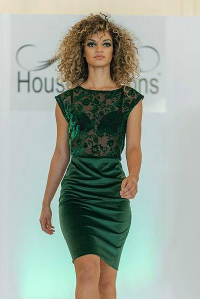 Showcasing her work represents the commitment of the House of iKons and Prince’s Trust to nurturing young talent.

Also on the runway were the likes of UAE designer Johnny Bagadiong who’s collection was dark, mysterious and mystical. The innovative designer used prominently black and gold for a luxuriously sophisticated look.

The hugely creative designer Michael Conde takes his experience of stage and costume design to push the boundaries with the use of exquisitely sculpted lace masks. Overall, the masks and statement neckpieces echoed stained glass windows for a truly original look.

One of our favourite collections of the night was from Hollywood designer Rocky Gathercole Artelier who has created stunning couture pieces for the likes of Paris Hilton as well as one-off costumes for Britney Spears, Lady Gaga, and Katy Perry.

For the House of iKons, Rocky told us that his collection was based on ‘letting the woman take over’.

Of course the biggest anticipation of the night was the grand finale of YEN. The first ever designer from Abu Dhabi to showcase for London Fashion Week, YEN brought a royal elegance to the House of iKons.

With exquisite floor length gowns and superb detailing, brand ambassador for the haute couture brand, Lady K herself wore a showstopper to close the evening.

In her ambition to make House of iKons a global household name, Lady K also announced that the a House of iKons will be launching in Dubai on 14/15 November 2014. For more details about House of iKons Dubai 2014 spectacular, please visit the iKons website.