TV queen Ekta Kapoor turns mother as she welcomes a baby boy through surrogacy. Ekta broke the news on Instagram, revealing the baby name as Ravie.

“Please send your luv and blessings for lil Ravie.”

Kapoor who is renowned in the world of Indian television for co-producing soaps such as Kyunki Saas Bhi Kabhi Bahu Thi (2000-2008) reportedly became a mother on January 27, 2019.

Ekta made an official announcement about her baby boy through an Instagram statement on January 31, 2019.

Revealing the name in her post, Kapoor captioned it: “Please send your luv and blessings for lil Ravie.”

Ekta named her son Ravie Kapoor after the original name of her father Jeetendra. Excerpts from her statement post read:

“I cannot even begin to express how happy my baby’s birth has made me. Everything in life doesn’t go the way you want it to but there are always solutions to those hiccups.

“I found mine and today, I feel immensely blessed to become a parent.”

Kapoor decided to go down the surrogacy route after she was unable to carry her own child.

Ekta also posted a statement from her doctor, captioning it:

Doctor Nandita who helped Kapoor with the process states:

“But we were unsuccessful. Hence, we had to take help of the technique of surrogacy which we performed nine months back at our Bloom IVF center.

“Nine months later she had achieved success with the birth of a child on Sunday.”

Bollywood celebrities went on Twitter to congratulate the new mother.

Filmmaker Hansal Mehta, who has worked with Ekta Kapoor for the web-series Bose: Dead/Alive (2017) tweeted:

“Many congratulations and lots of love dearest @ektaravikapoor. Welcome to parenthood and joy…”

“And this is the most heartening news this morning. Many congratulations Ekta.

“Welcome to the world and joy of parenting. God bless your baby with good health and lots of masti.”

And this is the most heartening news this morning. Many congratulations Ekta. Welcome to the world and joy of parenting. God bless your baby with good health and lots of masti. ??? https://t.co/dG92HnK2G1

Veteran actor Jeetendra is extremely thrilled to welcome his second grandson Ravie and told Zoom TV that he is living Ekta and Tusshar’s childhood through his grandchildren. He said:

“As a father, I can’t remember when I played with my children.”

I was so busy in struggling that I couldn’t contemplate when my children grew up. I’m living that with my grandsons.” 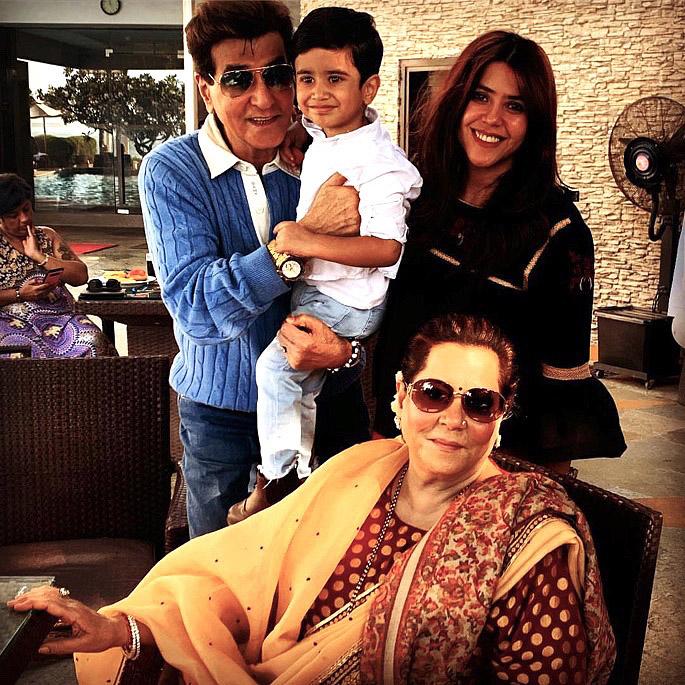 Earlier Ekta’s brother Tusshar Kapoor decided to be a single parent via surrogacy and welcomed his son Laksshya in 2016.

Many other Bollywood celebrities have also opted for surrogacy. In 2011, Aamir Khan and Kiran Rao welcomed their son Azad through surrogacy.

Abram, the son of Shah Rukh Khan and Gauri Khan was born to a surrogate mother in 2013.

Roohi and Yash, the twins of filmmaker Karan Johar arrived in 2017, courtesy of the same process. Sunny Leone and her hubby Daniel Webber also had twins through surrogacy in March 2018.

Kapoor will be hoping her new bundle of joy, will have a positive life on a personal and professional front.

Apart from Kasautii Zindagii Kay 2, she is also busy with the production of several web-series through subscription-based company AltBalaji.

DESIblitz congratulates Ekta Kapoor and her entire family on the arrival of her baby boy.

Kapil & Ginni inviting PM Modi to Delhi Reception?
Why did SRK not appear on Koffee with Karan 6?