Crash Team Racing Nitro-Fueled is an upcoming racing game that is a modern take on the classic arcade-style racers. It releases on June 21, 2019.

Players have to dodge obstacles and drive around different tracks

Crash Team Racing Nitro-Fueled is an upcoming game set to put a spin on the racing game genre.

It is a game which is set to rival the likes of Mario Kart and the 2019 release Team Sonic Racing.

Also known as CTR: Nitro-Fueled, the game features the characters from the beloved Crash Bandicoot franchise.

However, this racing game is not entirely new as it is a remaster of Crash Team Racing, which was originally developed by Naughty Dog for the PlayStation in 1999.

As it has been made for the modern day, there are a lot of features to be enjoyed. It looks to be a game for new players of the franchise. It also acts as a callback for players of the original game to have a nostalgic experience.

The upcoming game gives players another option if they enjoy arcade-style racing games.

We preview the game and what to expect when it comes out. 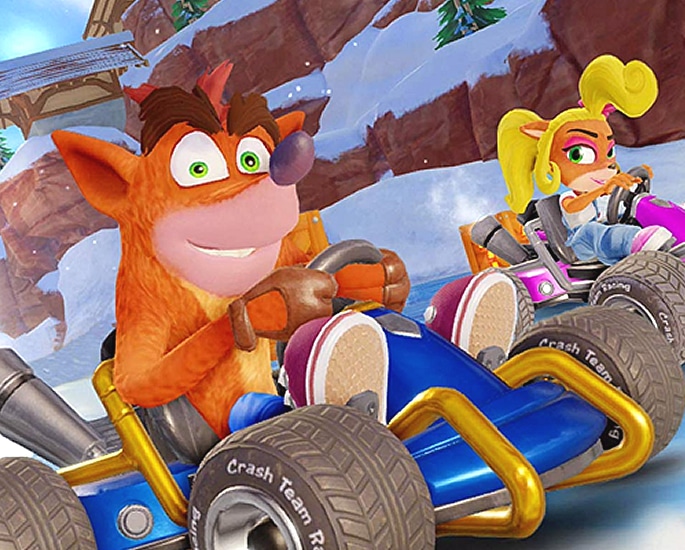 CTR: Nitro-Fueled has been developed by Beenox and published by Activision.

There had been speculation that Crash Team Racing would be remastered following the release of Crash Bandicoot N. Sane Trilogy.

It was a collection of the first three Crash Bandicoot games and it received successful reviews. The game even became the best-selling exclusive launch for PS4 in 2017.

The rumours became true as the CTR remaster was officially announced at The Game Awards of December 6, 2018.

Fans of the Crash Bandicoot series have already had a glimpse of what to expect with the demo but the full release will give gamers access to all the features.

The game is set for release on PS4, Xbox One and Nintendo Switch. However, PC gamers will be left disappointed as it will not be available for Windows. 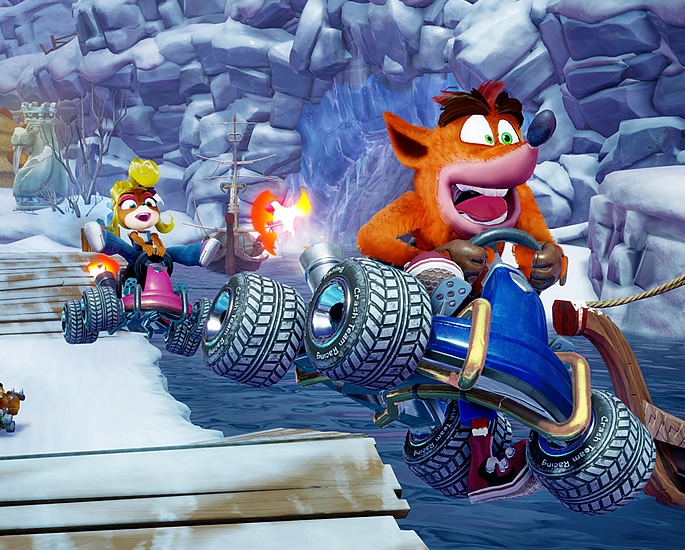 Players have to dodge obstacles and drive around different tracks in order to reach the finishing line, using the power-ups to help you as well as hinder opponents.

Your opponents will also be after these power-ups which will make each race a challenge.

But these difficulties make the game worthwhile and give you a sense of accomplishment when finishing in first place.

The adventure mode in Crash Team Racing Nitro-Fueled will allow players to discover new characters, areas, and different features. More will become available as players progress through the game.

A lot of new features have been added to CTR: Nitro-Fueled that were not available in the original game.

This includes online multiplayer and the ability to choose different karts. They can also be customised, meaning they can be designed to your preference.

The inclusion of content from other games makes this 2019 release full of depth with lots to do. 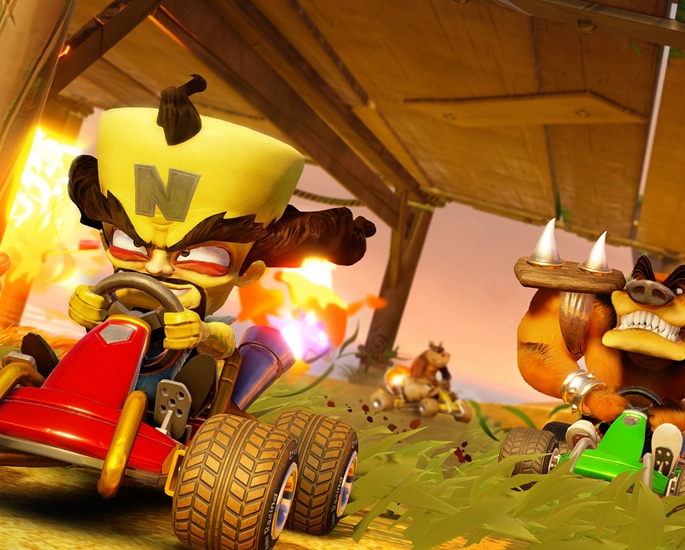 While the game is a remaster, there are a number of features to appeal to new gamers as well as fans of the original.

There are a number of options within the single-player and multiplayer modes to suit different types of gamers.

Gamers have free reign to pick characters, tracks and number of laps. This ensures that every race will be unique and different from the last.

Crash Bandicoot fans will love the adventure mode which can lead to a number of rewards being unlocked like characters and kart upgrades.

The classic split-screen option returns so gaming within households will be fun as you compete against friends and family. 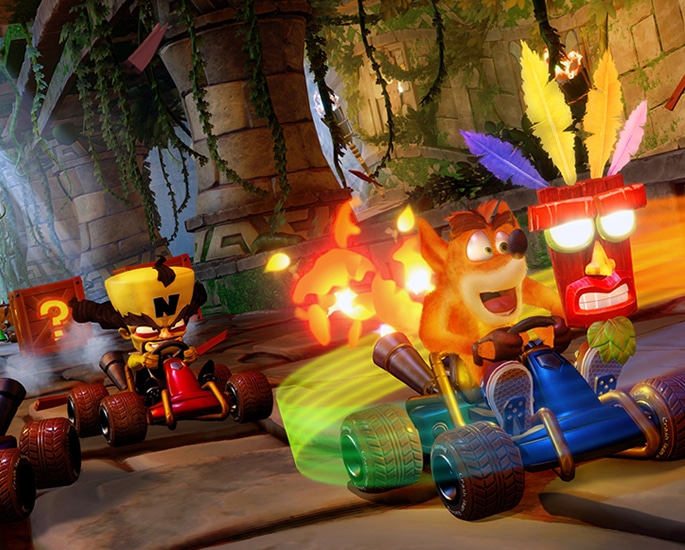 As it is a remaster from an older game, the graphics for CTR: Nitro-Fueled have been significantly improved.

The remaster will allow a new generation of gamers to enjoy a game that was popular in the 1990s.

The original game had fewer gamers as the industry was not as mainstream and not as many people had access to consoles.

According to the game developer, Crash Team Racing Nitro-Fueled will be supported on the Xbox One X and PS4 Pro, meaning the graphics will be even more clear in 4K display.

The developers have prioritised the visual display for the new game so that it will entice new gamers as well as fans of the original game for a nostalgic experience.

While the graphics are immensely detailed to provide a fun playthrough, that is not the only thing that has been developed.

Even the soundtrack has been remastered to suit the modern game.

But players have the option to change to the original soundtrack if they prefer to go for a retro feel to the game. 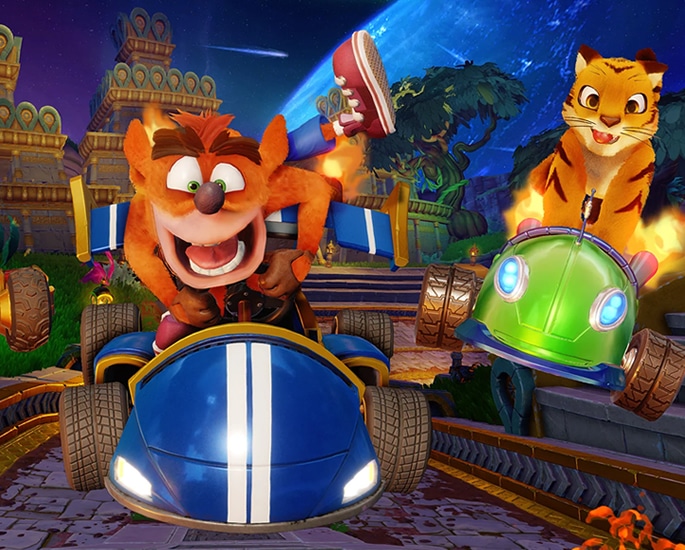 This means that there is a total of 25 characters to choose from.

It even includes characters who previously only appeared as boss opponents. They are now playable for the first time.

Upon release, only eight characters from the original Crash Team Racing will be available to players.

The rest have to be unlocked by completing challenges and progressing through the game’s adventure mode.

Characters from Crash Nitro Kart are unlocked by purchasing them from an in-game shop using Wumpa Coins. They are earned through gameplay.

Characters include Nitros Oxide, Zem and Zam as well as fan favourites like Coco and Crunch Bandicoot.

There is an extensive choice of characters to pick from. It is all down to your personal preference. 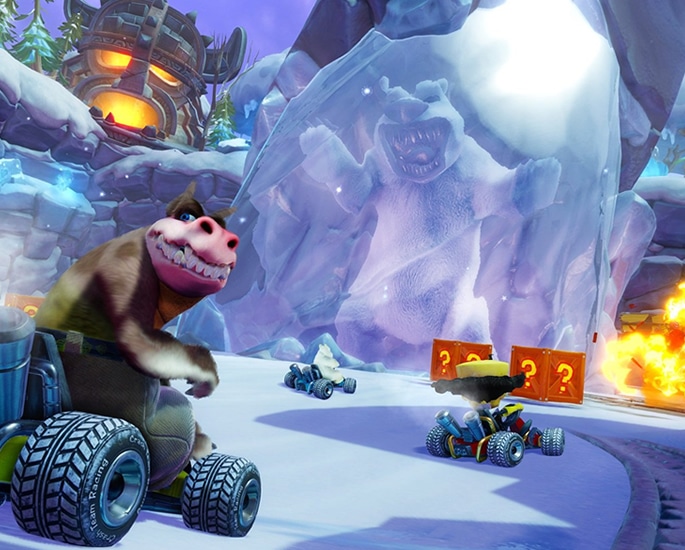 CTR Nitro-Fueled includes 18 tracks. All of them are based on the original versions seen in the previous games.

Those who played the originals and had a favourite can race on them once again.

Each track is completely different from one another, and you will surely enjoy playing on each one.

The tracks may feel short but there are twists and turns around every corner which make each race an exhilarating one.

There are different power packs available on the tracks that can give you an advantage during each race. They can also put your opponents at a disadvantage.

The environment is crisply captured in immense detail even as you race around the track at high speeds.

It is a possibility that not every track will be available at the start of the game. Players may have to progress through the game to unlock them but this has not been confirmed.

Crash Team Racing Nitro-Fueled takes the original games and puts a modern twist on them to provide a new racing experience while calling back on the original.

The game is filled with chaos and personality to cement itself as an ideal party game for the whole family.

It is also a breath of fresh air in a genre which has seen games with repetitive gameplay.

CTR: Nitro-Fueled is old fashioned fun which is what the original games were known for. The release is just around the corner and Crash Bandicoot fans cannot wait.

Mohsin is a writer, editor, thinker and fan of incomplete sentences. He is also crazy about playing video games and unveiling changes in technology.
Best Smartphones to Buy for Mobile Gaming
The Best Headphones to Buy for Gaming