Meera Syal stars in a National Theatre adaptation of Katherine Boo’s bestselling non-fiction novel, Behind The Beautiful Forevers, which vividly depicts life in a Mumbai slum.

"We are all part of the same global economy and all as complex as each other."

An adaptation of Katherine Boo’s bestselling non-fiction novel, Behind The Beautiful Forevers, starring Meera Syal, is showing at the National Theatre.

Written by David Hare and directed by Rufus Norris, the play revolves around the issues faced by the people of Annawadi, a Mumbai slum. Situated in the shadow of Mumbai’s busy international airport, it acts as the gateway to India’s ‘economic miracle’.

Initially there were doubts as to whether the production would live up to its expectations. Hare had the unenviable task of turning a piece of factual reportage into a credible script for theatre.

Boo’s book does not have the narrative or the structure of a story. Boo tells many different individual stories, and Hare’s job was to bring these together into an over-arching account. 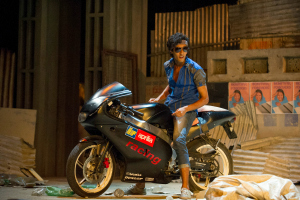 He chose to concentrate on two themes in particular. The central theme is the difficulty of doing good in a corrupt and imperfect society.

A secondary theme is idealism and resistance of the youth against the endemic corruption of their elders. As we often see in the news, these are both very relevant themes in contemporary India.

Whilst being in a detention centre, Abdul realises that he wants to live an honest life. Samir, however, turns thief to up his earnings. Manju rejects the ways of her mother, Asha.

Another notable plot line is the tragic plight of the Hussains. The renovation of their dwelling attracts the jealousy of their neighbour, Fatima, who has the misfortune of only having one leg.

Fatima sets herself alight and charges the Hussains of being guilty. The Hussains are left entangled in a legal case. In India’s corrupt and inefficient legal system, basic justice costs them every penny of their savings.

The difficulty of portraying a slum setting on in the theatre was overcome due to a powerful set and a stellar cast. Pal Aron, who plays The Master/Judge CK Dhiran, said: “Anyone who comes to see show will hopefully be able to smell the smells, see the sights, feel the grit that we are trying to create on stage.”

The actor who stands out the most is Meera Syal. She played the role of Zehrunisa in a fierce and uninhibited manner, and yet displayed a deep understanding of the nuances of the character.

It would be wrong to assume that Meera Syal has been typecast after roles in Goodness Gracious Me and The Kumars at No. 42. Being an author and playwright herself, she embraced the importance of truly bringing a written character to life.

When Meera was asked about her role as an actor depicting a non-fictitious character in the National Theatre, she said:

“Your job as an actor is to tell the truth and honour the fact that you are depicting real people’s lives.”

Shane Zaza showed the right hold in his stage presence and delivery. Hiran Abeysekera, who played Abdul, brought energy to the stage and ended the play on a strong note. Stephanie Street performed the role of Asha with full conviction. Anjana Vasan conveyed the goodwill in Manju’s actions.

Production values of the highest quality were needed to depict a Mumbai slum and so deserved commendation goes to Rufus Norris for his production, Katrina Lindsay for design and Paule Constable for lighting. The London audience had been transported to the heart of Annawadi.

The visuals added to the atmosphere, such as the falling rain, plastics and rumble. There was the bleakness of the rickety slum shacks and the police station.

Even a rickshaw made its way on stage! The towering presence of the airport looms large over the slum, in the same way that an East Ender in London might experience Canary Wharf. 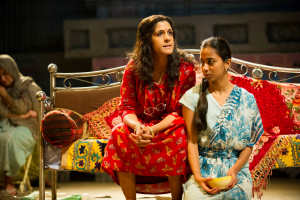 Several of the characters remain on stage despite them not being actively involved in the scene, which re-creates the lively and dynamic backdrop of slum life.

The lack of privacy in slum life is depicted well, and how communal living means that your business can become everyone’s business.

When the play director, Rufus Norris, was asked about the main purpose behind the production, he said: “[It] reveals the degree to which these people in this situation have every strand of complexity in their lives that we have.

“The ambition, the complications of family and neighbours and everything else – it’s all going on. We are all part of the same global economy and all as complex as each other.”

Similarly, the writer of the novel, Katherine Boo said: “The real aim was to give people the chance to talk about the structures that inhibit equality. Sir David’s new play does just that.”

The novel has received many accolades, such as the National Book Award, and being listed as a New York Times bestseller. Judging from the positive reaction so far, and the critical acclaim it has garnered, the production at National Theatre could be a success.

Behind the Beautiful Forevers is currently playing at the National Theatre, Southbank, London until April 2015.

Sonika is a full-time medical student, Bollywood enthusiast and lover of life. Her passions are dancing, travelling, radio presenting, writing, fashion and socialising! “Life isn’t measured by the number of breaths taken but by moments that take our breath away.”
Gandhi Statue in final stages at Parliament Square
DSC Prize for South Asian Literature 2015 Shortlist