Amir Khan defeated New Yorker Chris Algieri in his own backyard in a unanimous decision victory. After the fight he called out Floyd Mayweather once again. Will they meet in a much-anticipated superfight?

Amir Khan outpointed Chris Algieri in an exciting twelve round fight, at the Barclays Centre, in Brooklyn, New York, on Friday 29th May 2015.

Amir Khan was hoping to put on an impressive showing to justify his credentials as a challenger to Boxing’s pound-for-pound king, Floyd Mayweather.

However, this Chris Algieri that showed up was a completely different incarnation to the one who Manny Pacquiao knocked down six times in their Macao fight in November 2014. 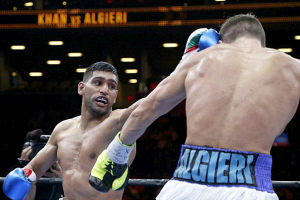 In this bout in Algieri’s home town, Khan’s chin, which has been questioned throughout his career, was tested by some crunching right-crosses.

From round one, Algieri found success in landing his signature weapon. But where as a younger, less-experienced Khan would have been floored by these shots, the Lancastrian stayed calm and withstood the attacks.

Algieri tried his best to impose his will on Khan by using his superior size. He attempted to fight Khan on the inside, where Khan has traditionally been weak, and turn the fight into an old-fashioned brawl.

With this aggression, Algieri was having success, much to the delight of the Brooklyn crowd. He had the Bolton native on the back foot, and he was evening out Khan’s early lead. 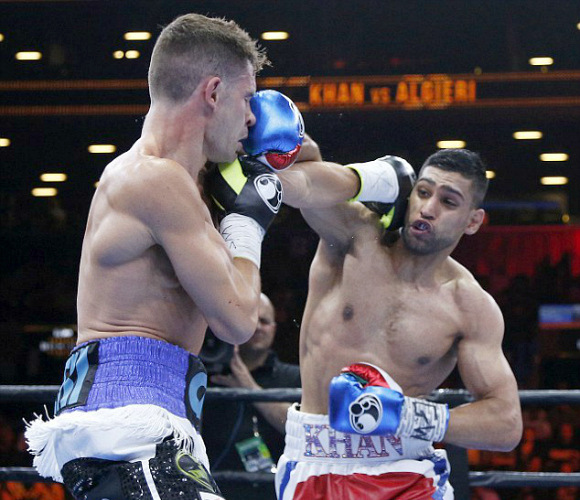 In the fifth, Khan found himself on the floor, but it was judged, perhaps fortunately, to have been a slip. Nevertheless, Algieri had Khan on the ropes at the end of the round.

However, Algieri looked like he was beginning to tire. Khan used his footwork and superior handspeed, to nullify Algieri’s reach and height advantage, and stay out of harms way.

Even though Algieri assumed the centre of the ring, Khan controlled the action from the outside. 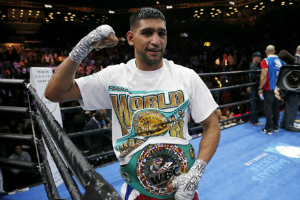 Speaking about his tactics, Khan said: “I was not expecting him to come forward. I had to change it to game plan B. And that worked for me.”

Khan’s excellent conditioning showed in the latter rounds, as he looked like the fresher fighter. At one stage, he nearly dropped the American with a right upper-cut.

Nevertheless, the Englishman dug deep and he needed to. Algieri gave it his all in the final rounds, as the crowd rose to their feet for a frenzied finale.

But the British fighter hung on and secured the victory like a seasoned champion.

Khan’s intention to fight Floyd Mayweather have been clear for some time. And in the post-fight interview, Khan reiterated this aim:

“We all want to fight Floyd Mayweather. But when you wait so long for something it can set you back. I did not want to look past Algieri or any other fighter.”

Mayweather is undoubtedly the best pound-for-pound fighter in the world currently.

But many boxing pundits believe that the Pakistani-origin boxer has the speed and a skill-set that can challenge the American.

Mayweather is known for choosing his opponents meticulously, and will no doubt watch this fight back many times to study it.

Some boxing commentators believe that after this fight, in which Khan struggled to impress against Algieri, Mayweather might choose to fight Khan, expecting another low-risk, big pay day.

Furthermore, Khan seems to enjoy support amongst the American audience, partly because he is a gutsy fighter who has never been involved in a boring fight.

He came out to a great reception to the New York crowd. And during the fight, he enjoyed as much support as the New York native.

This would support the fact that Amir Khan is a box office attraction in an age of boring boxing matches.

While Amir Khan might have disappointed, the Khan-Algieri fight was definitely a win for boxing fans. It had all the ingredients of emotion, excitement, and entertainment.

Many boxing fans will hope that a similarly fascinating fight will be set up between Amir Khan and Floyd Mayweather.