Floyd Mayweather out-boxed Manny Pacquiao cruising to a unanimous decision victory in the ‘Fight of the Century’ at the MGM Grand Garden Arena in Las Vegas.

“I kept him on the outside. I was a smart fighter. I out-boxed him."

With his victory the still undefeated Mayweather (48-0, 26 KO) defended his WBC and WBA welterweight belts and won Pacquiao’s WBO title.

Mayweather said: “I kept him on the outside. I was a smart fighter. I out-boxed him.

“I wasn’t getting hit with a lot of shots. Until I sat right there in the pocket.”

Many battles in boxing and other combat sports are often promoted as a fight between good versus evil.

The consensus was that Pacquiao was the fan favourite, especially within the MGM Grand Garden Arena. Mayweather entered the arena that he has made his own to a loud chorus of boos. 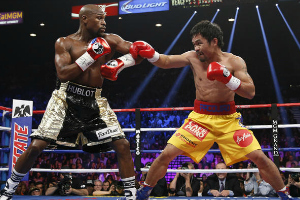 For many observers and commentators, the ‘Pacquiao passion’ that we are used to seeing was severely lacking. Pacquiao needed to start fast and steal a couple of early rounds. However he struggled to impose his will.

It was expected to be a battle between Pacquiao’s attack and Mayweather’s defence. The American used his size advantage and kept Pacquiao at bay with elusive footwork and excellent counters. His two straight rights in the first rounds were an early warning for the Filipino fighter.

In the fourth round, Pacquiao released a barrage of punches, which brought many of the crowd to their feet. Mayweather felt the impact of these combinations, but covered up well.

The self-confident Mayweather was not afraid to let his mouth do the talking during the battle. In the sixth round, during another explosive offensive from Pacquiao, Mayweather just shook his head and said ‘No’ to show that he was not affected. 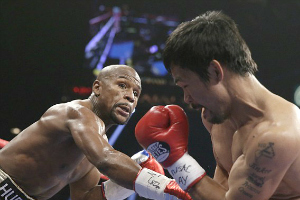 From the seventh round, the naturally defensive Mayweather went on the attack and asserted himself as he took his place in the centre of the ring.

The high volume of punches and combinations that we expected from Pacquiao did not materialise. Nevertheless, the relentless Pacquiao kept moving forward, but to no avail.

Pacquiao believed that he won the fight. In post-fight interview, he said: “I thought I won the fight. He didn’t do nothing. He [just] moved outside.”

In the end, Mayweather cruised to an easy victory. By the end, the American looked like he had barely broken a sweat.

With his resounding victory in what was dubbed as the ‘Fight of the Century’, Mayweather cemented his place as the best pound-for-pound boxer in the world.