Brit-Asian singer Zayn Malik has reportedly recorded his first Hindi song for Bollywood. The heartthrob revealed the news in an interview with Elle India, where he also spoke about meeting his icon Shahrukh Khan.

The ex-Directioner revealed the news in his cover interview with Elle India, February 2018 issue. The star said:

“It’s one of the first songs I’ve sung in full Hindi, so it’s going to be cool to see what the response to that is.”

While little is yet known which Bollywood film the song is for, fans are eagerly awaiting this fresh new track, which will feature Malik singing in Hindi rather than his usual English.

The news will perhaps come as no surprise to his Desi fans. The 25-year-old has always been vocal about his love for Bollywood. Zayn admitted to Elle India that he grew up in his hometown of Bradford watching Amitabh Bachchan and Aamir Khan films, while his favourite film appears to be SRK’s Devdas (2012):

“Before I can even remember… [Bollywood films were] on the TV.

Interestingly, Zayn revealed that it was only after he met the Badshah of Bollywood at The Asian Awards that he became a fan:

“I personally wasn’t a huge fan until I met him. I realised how humble he is. Really showed a different side to him.

“He always came across as slightly arrogant in the movies to me, but when I met him in real life, he was so nice. He just completely changed my opinion of him.”

The special interview with Elle India seems to have quelled the rumours that Zayn was taking his next direction towards Bollywood, as he has also reportedly said in the past that he would like to get into acting. 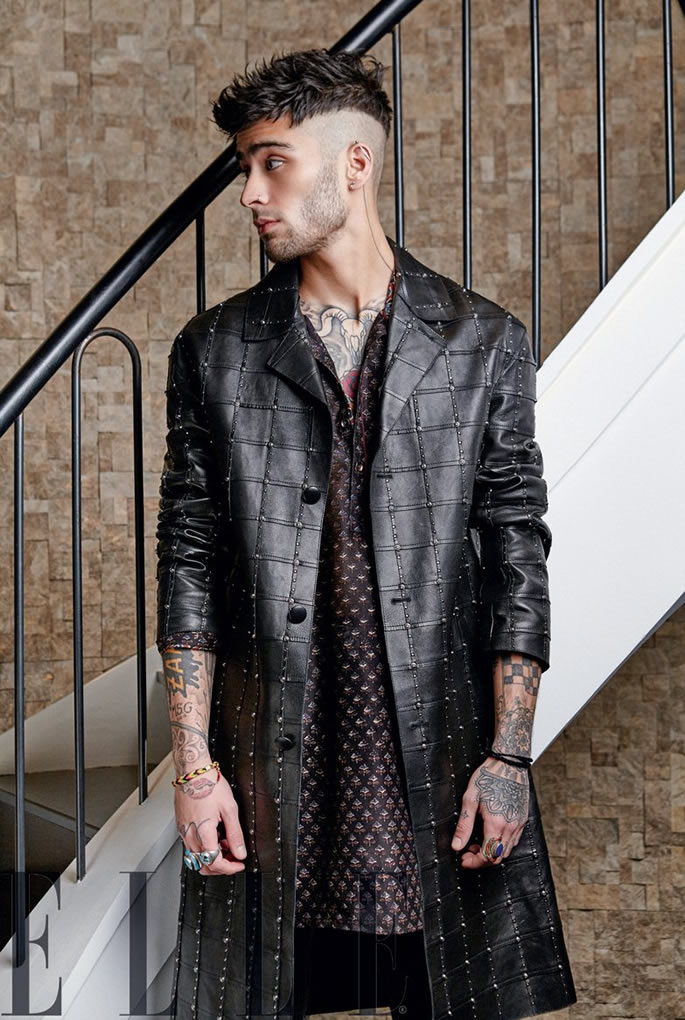 Malik showed off his love for fashion and his Asian culture by wearing bespoke pieces by top Indian designers for the New York photoshoot.

In particular, Zayn looked extremely dapper in a printed silk kurta by Rohit Gandhi and Rahul Khanna, topped with a Versace leather coat. In other shots, he wears a corduroy and leather jacket by Rajesh Pratap Singh. The singer regularly mixes East with West when it comes to fashion, and his own clothing line is inspired by his Pakistani background.

While this upcoming Bollywood track is reportedly his first Hindi song for the film industry, Zayn has already experimented with Urdu melodies for his first album, Mind of Mine.

Released in 2016, the album featured ‘Intermission: Flower’ where fans could hear the young pop star croon a few Urdu couplets against an acoustic guitar. The track, he later admitted was influenced by his father, Yaser’s love for Indian musical legend Mohammad Rafi.

Zayn, recently added to his collection of tattoos with the name, Yaser, as tribute to his father. He also posted a picture of his dad with Dilip Kumar on Instagram:

The Brit-Asian singer adds that his second album will also feature more nods to his Desi heritage:

“There’s definitely a lot of Urdu; some nice qawwali sounds. There might even be some bhangra vibes. I have worked with A R Rahman on one song,” Zayn reveals.

While Zayn has been having great success as a solo artist, what the singer shows is a definite versatility when it comes to trying out different musical styles.

And who knows, maybe we could see more of Zayn Malik in Bollywood in the future? Perhaps even on the big screen as well?