Zayn Malik is Cool and Stylish on Elle India Cover

Singer Zayn Malik graces the cover of Elle India for February 2018! Looking cool and trendy in Tommy Hilfiger, he discusses a love for Bollywood – revealing his favourite actor and film.

Gazing at the camera, Zayn smoulders on Elle India as he wears edgy piercings.

Elle India has a special treat in store for their February 2018 edition, as Zayn Malik graces the magazine’s cover for the first time ever!

The British-Pakistani singer looks utterly stylish for his cover photo shoot, especially with his cricket jumper. Designed by Tommy Hilfiger, it’s emblazoned with red and blue stripes along the collar and sleeve cuffs.

While the clothing may seem preppy, Zayn injects attitude into the look. He shows off his various tattoos, etched on his arm and torso.

From the yin-yang symbol to floral designs, the star has built quite the collection of inkings. He has even added a new piece, a wolf design on his chest, tattooed by Bondi Ink star Megan Massacre.

Gazing at the camera, Zayn smoulders on Elle India as he wears edgy piercings. We particularly love his nose piercing, which reminds us of when Aamir Khan also wore one, for his upcoming role in Thugs of Hindustan.

For his first time on the magazine’s cover, we reckon Zayn has aced this photo shoot. His fans agree too, as over 1.2 million liked the image when he shared it on Instagram! 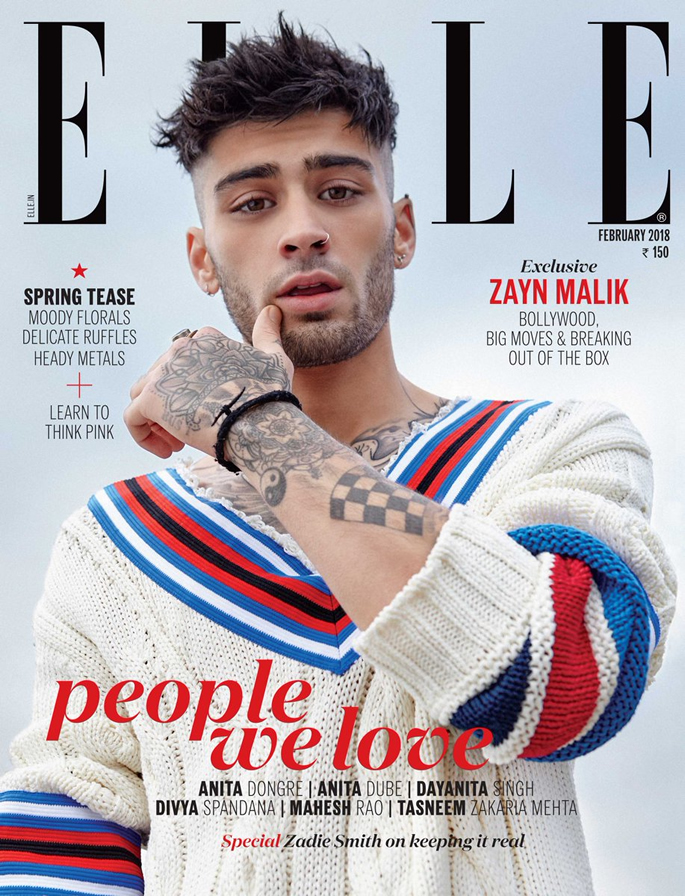 Currently, the February 2018 edition is yet to be released, however, Elle India has teased fans on what they can expect with Zayn’s shoot and interview.

On its website, the magazine revealed that the singer’s stylist Jason Rembert used “a mix of bomber jackets, denim, sharp suits and lots of prints and textures”. It seems we’re likely to see a rock’n’roll inspired theme!

Fashion Editor, Rahul Vijay, also admitted his unfamiliarity of Zayn, saying: “I hadn’t heard his music before and I just knew of him as a popstar who was dating Gigi Hadid. I would play his tracks in preparation for the shoot while doing call-ins.”

The editor had kind things to say about the celebrity, adding:

“He’s what a star his age should be: humble, calm and very easy to work with. He doesn’t like to smile in pictures, but that’s fashion so it works.”

He also revealed that, during a discussion over lunch, Zayn didn’t realise the extent of his popularity in India. In addition, the British-Pakistani star spoke of his love for Indian food, claiming “his mom makes the best Indian food around”, and Bollywood.

We’re sure you can guess who Zayn’s favourite Hindi actor is? Of course, it’s the iconic Shahrukh Khan! The legend actually appears in the singer’s favoured movie – Devdas, which also stars Aishwarya Rai Bachchan and Madhuri Dixit.

Rahul even reveals that Zayn introduced Gigi to the world of Bollywood with this film! We wonder if they have watched any more Hindi flicks together?

In 2015, the PILLOWTALK singer actually met SRK at the Asian Awards – a moment that likely has stuck with him. The two even posed together for a selfie, which Shahrukh captioned with praise for Zayn, saying on Twitter:

“This kid is so cool. May Allah bless him. Dinner time at the Asian Awards.” The image made history that year by becoming the most retweeted tweet in India!

With Zayn stunning us with his Elle India cover, we hope he’ll grace more magazine covers in the near future.