SRK’s world-famous selfie with former One Direction member, Zayn Malik, has been confirmed by Twitter India as the most retweeted tweet ever in India!

The combined star power of Bollywood and pop has knocked Modi off his Twitter throne.

Shahrukh Khan’s selfie with former One Direction member Zayn Malik is officially the most retweeted photo in India.

Twitter India has confirmed the black-and-white selfie taken at the 5th Asian Awards in London on April 17, 2015 has garnered the most retweets ever in India.

With over 117,000 retweets and 166,000 favourites, the photo captured a precious moment shared by the two Asian Awards winners, who met for the very first time.

Both SRK and Zayn, with over 27 million Twitter followers combined, were praised for their respective contributions towards Bollywood cinema and mainstream pop music at the awards ceremony.

Speaking about meeting the teen heartthrob, SRK said: “He’s a fine young boy. I spent some time with him. We just hugged each other. We didn’t talk at all.”

The selfie also marked the first sign of activity on Zayn’s Twitter account since he cleared rumours of cheating on his fiancée, Perrie Edwards, on March 18, 2015.

This kid is so cool. May Allah bless him. Dinner time at the Asian Awards. pic.twitter.com/l0gV12n0kv

Clearly, the combined star power of Bollywood and pop music has knocked Prime Minister Modi way off his Twitter throne.

Though it has been almost one month since Zayn left One Direction, he was grateful for the experience and thanked his former bandmates.

Upon receiving the Asian Award for ‘Excellence in Music’, he said: “I’d like to take this moment to thank four of the best guys that I ever met whilst being in the band and doing all the amazing things that I did.”

To quench the fans’ thirst for more Zayn love, the Bradford superstar followed up on Twitter by thanking everyone for their support, following his departure from one of the world’s biggest boyband.

Naughty Boy also jumped in the frame for a quick selfie with the Asian superstars at the London event, but it failed to attract half as many favourites or retweets compared with the Zayn and SRK combo.

Life after One Direction has not been easy for the young star, with worldwide media closely monitoring his next move. 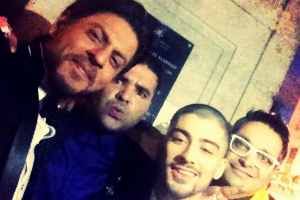 The unexpected release sparked negative attention on Twitter from Zayn’s former bandmates, most notably Louis Tomlinson who was displeased at Naughty Boy’s insensitivity towards 1D fans.

The band continued their world tour in Malaysia as a quartet, during which Harry Styles shed a few tears on stage at the absence of Zayn.

The boys wrapped up their tour in Dubai in early April and will hit the road again in June 2015.

It is unclear what the future holds for Zayn, but it has been reported that he recently met with Bend It Like Beckham (2002) director, Gurinder Chadha, to discuss a possible career in acting.

It is safe to say that we would love to see Zayn and SRK starring alongside each other on the big screen!