Music producer Naughty Boy has released a demo track with Zayn Malik on Twitter. It hasn’t been a full week since Zayn left One Direction! Find out more!

"The music he’s making is completely different to anything One Direction have ever done before."

A new track by Naughty Boy featuring the vocals of Zayn Malik has surfaced, only six days after Zayn left boyband One Direction.

In the early hours of March 31, 2015, music producer Naughty Boy posted a tweet with a link to a track titled ‘I Won’t Mind’.

He also wrote: “Let the music do the talking. there is nothing but love for what was left behind. thats why we don’t mind. 😉 #2016 #zaughty #zindabad”

The demo track, sung by the former One Direction heartthrob, is closing in on 2 million plays and 14,000 likes on SoundCloud. It is also gaining momentum in Twitter’s ‘worldwide’ trend.

‘I Won’t Mind’ is distinctly different from One Direction’s teen pop musical style. Besides its melancholic feel, the most notable difference is its genuine and personal lyrics.

Though the collaboration has not been officially confirmed as the beginning of Zayn’s solo career, it is obvious he is not ready to be ‘a normal 22-year-old who is able to relax and have some private time out of the spotlight’.

Fans’ reactions are polarised, with some expressing a new level of hatred towards Zayn and others are simply glad to still be able to hear his voice.

i can’t stop listening to i won’t mind, zayn’s voice calms me down so much and it’s such a beautiful song

But One Direction’s Louis Tomlinson, currently touring with the band in Cape Town, is not amused and blames Naughty Boy for ‘trying to wind the fans up’ in their Twitter row.

Wow @NaughtyBoyMusic you’re so inconsiderate pal , seriously how fucking old are you ? Grow up ! #masterofallwisdom

Some One Direction fans have also protested against Naughty Boy for taking Zayn away and tearing One Direction apart. It is almost painful to see how some fans try desperately to reunite the band.

if zayn left the boys for naughty boy i would feel so betrayed but i wouldn’t hate him cause i can’t. if he did i hope he doesnt regret it.

Despite the fan shock, there have been signs that Zayn’s reasons for quitting One Direction are not as innocent as he claimed.

Two days after Zayn’s split from the boyband, a source told the Daily Mirror: “Zayn has a clear vision for the music he wants to create, and the direction he wants to take his career in. 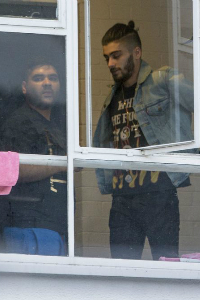 “The music he’s making is completely different to anything One Direction have ever done before. It’s very slowed-down R&B and quite sexual. It’s going to blow fans’ minds.”

The 22-year-old singer has also been taking advice from predecessor Robbie Williams. Robbie left Take That at the height of their career and found mega success as a solo artist.

The Daily Mirror’s source revealed: “Zayn was only a year older than Robbie was when they joined their bands. They both did five years then felt they just had to leave.

“He sees himself as one of the few people who can truly understand what Zayn’s going through. He cares enough to offer advice, just like Elton [John] did with him.”

Solo career or not, it is good to see Zayn continue to pursue his passion for music and foster British Asian presence in the mainstream music scene.