Disha Patani raised temperatures on Instagram as she showed off her toned figure in animal print lingerie.

It was nothing short of a visual delight when Disha Patani shared a photo of herself wearing animal print lingerie.

In the picture, Disha is seen wearing a black and white, animal-printed Calvin Klein lingerie set.

The straps of the bralette and underbust featured a thick white band to contrast and offset the animal print.

Disha complimented the animal print set with a pair of unbuttoned light-washed jeans, providing a cheeky glimpse of the matching underwear.

Disha flaunted her curves and toned body, striking a sultry pose as she relaxed on a bed.

The soft, natural glam makeup beautifully accentuated her features and she also donned a nude shade of lipstick and bronzed skin.

Disha’s hot look went down a treat on Instagram. 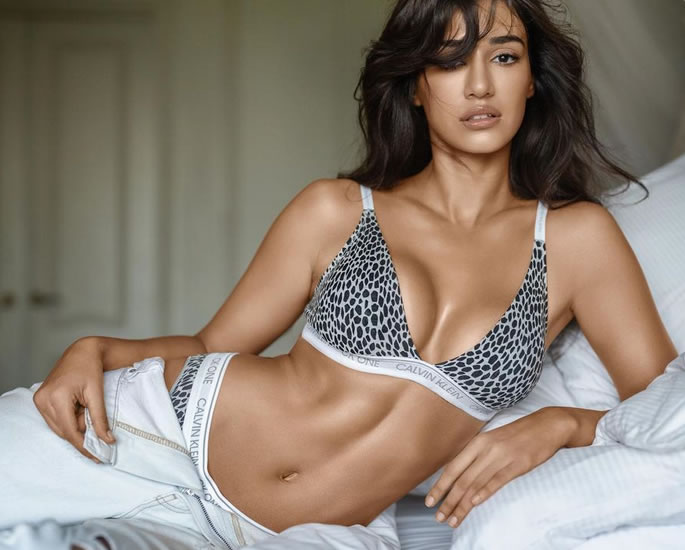 Tiger Shroff’s mother Ayesha Shroff and his sister, Krishna Shroff were the first to comment on her Instagram picture.

Krishna wrote: “You are unreal.”

After years of constant on-and-off in their relationship as well as some unresolvable problems, Tiger Shroff and Disha Patani decided to call it quits.

Tiger and Disha haven’t spoken publicly about their split or the factors that led to it, though, since it happened.

Disha Patani is said to have found love with Serbian model Aleksandar Alex Ilic after splitting up with Tiger Shroff months earlier.

The pair has never made their relationship public, but they frequently post lots of photos of themselves together and have been seen going out together.

Aleksandar revealed details of his allegedly romantic involvement with Disha in an interview, saying that the two are more like family to one another.

He said: “We know the truth. I don’t understand why people need to guess what is going on.

“Why can’t they just let other people live their own lives peacefully? We just laugh off these stories.”

He also mentioned how they have been together through thick and thin and kept their bonding intact even in a competitive world.

Tiger Shroff was asked about his relationship with Disha on Karan Johar’s show Koffee With Karan 7 in 2022, to which he replied:

“We have always maintained that we are amazing friends and that is what it is today.”

Disha and Tiger worked together in Baaghi 2 (2018), directed by Ahmed Khan.

Ilsa is a digital marketeer and journalist. Her interests include politics, literature, religion and football. Her motto is “Give people their flowers whilst they’re still around to smell them.”
Radhika Merchant stuns in Pink Lehenga at Mehendi Ceremony
10 Spring/Summer 2023 Fashion Trends to Know