Winners of the Asian Business Awards 2014

"The Asian success story is that of humble beginnings, working relentlessly [and] providing for the family."

The Asian Business Awards 2014 celebrated the extraordinary achievements of the Asian business community in the UK. Taking place on Friday 11, April, in London, the evening saw 800 notable guests arrive for one of the most important dates in the business calendar.

Hosted by Radio Host Nihal Arthanayake, the awards ceremony enjoyed its 17th year, honouring those who have contributed towards Asian welfare through entrepreneurship, enterprise and innovation.

Over the years, the Asian community has been renowned for their entrepreneurial spirit and their undeniable impact on the British economy. 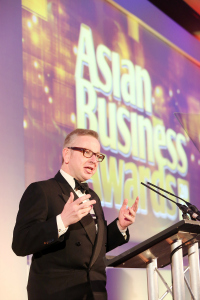 It is well documented that the business sense of Asians has been commended and even been described as the spine of a recovering economy. In total, British Asians contribute around 10 per cent to the UK’s total GDP.

True on form, Nihal led a compelling panel of industry experts Including Vijay Patel of Waymade, SP Lohia of Indorama, and Zameer Choudrey of Bestway Cash and Carry. The group spoke about the genesis of their own business start ups and offered some valuable advice for up young entrepreneurs.

There was a range of guests from different sectors and business types highlighting the variety and the spread of business. Also in attendance were celebrities from the world of entertainment including Rishi Rich, H Dhami, Nitin Kundra, Keith Vaz, Ace Bhatti and Bhaskar Patel.

Education Secretary, Michael Gove MP was a Chief Guest at the event. Addressing the talented members of the audience, he said: “Today we celebrate some of the most successful Asians in the UK, many of whom started with a small idea and worked their way up the ladder to where they are today. 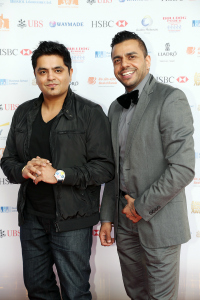 “There is one consistent thread that binds these individuals together: never being afraid to dream big and work hard to achieve those dreams. There is much to be learned from the famous ‘Asian work ethic’ and I have no doubt that their stories will continue to inspire future generations across the board.”

The awards also saw the launch of the annual Asian Rich List, a huge feat in itself which acknowledges those Asians who have succeeded the most in terms of wealth. For a second year running, the Hinduja brothers were declared on top with a £13.5 billion empire that is still expanding and growing every day despite the national recession the UK is currently suffering.

The prestigious list which includes 101 names was published under the Asian Media and Marketing Group (AMG) and Eastern Eye.

With the Hinduja brothers also winning Asian Business of the Year award, Kalpesh Solanki, the Managing Editor of AMG, said:

“The Asian success story is that of humble beginnings, working relentlessly, providing for the family, educating our children and giving back to society. And from those very humble beginnings today we see national and multi-national organisations employing thousands of people, generating incredible wealth and paying billions in taxes. We see many businesses innovating and building for the future.

“The government must unleash the power of the Asian business community as well as have the right framework to encourage and attract enterprise.”

The Asian Business Awards also supported the charity project, ‘Educate Girls’, which was part of the British Asian Trust that has been set up by Prince Charles.

Here is the full list of winners of the Asian Business Awards 2014:

In an employment market that is still struggling, these awards and functions can inspire future generations and encourage them by highlighting how self-employment and enterprise is a viable possibility for success.

With the media continuously acknowledging role models such as Alan Sugar and Richard Branson as examples of successful British entrepreneurs, there is a noticeable lack of Asian faces for the youth to relate and even look up to. Thus the awards provides the much needed recognition for Asians, which non-Asians should not ignore.

An incredible evening recognising the achievements and contributions of local communities, the Asian Business Awards remains one of the essential additions to the business calendar. Congratulations to all of the winners.