The annual Asian Rich List highlights the biggest business people in the Asian community. Vital players in the UK’s economy, this year’s 101 names saw an impressive combined wealth of £52 billion.

"Asians have come a long way from the stereotypical corner-shop owners.”

Asian business leaders flourished to the grand ballroom of Westminster Park Plaza in London amidst a flurry of celebrities, politicians and media pioneers.

With Asian businesses one of the key factors to the UK’s booming economy, it was pretty apt that the Asian Business Awards would celebrate their vital achievements of the last year.

With the awards on one side, the other hot topic was the outcome of the annual Asian Rich List which monitors the wealth of the top business pioneers from the Asian community. 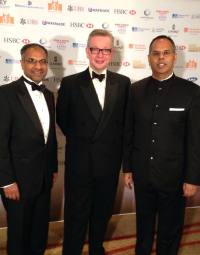 For a second year running, Indian Hinduja brothers took the crown with an estimated wealth of £13.5 billion, making them the richest Asian businessmen in the UK.

Since they last won the award a year ago, they pulled in a further net profit of £1 billion during 2013 to add to their global empire – not bad for a British nation suffering from the bite of recession.

Explaining their undisputable success, Gopichand Hinduja said: “The lesson one can learn was from what my father used to say – Never put all your fruits in one basket.

“This has always been rewarding for the group because suddenly if you have an economic crisis in one country there is somewhere else where things are progressing.”

The Hinduja brothers enjoy a global network of businesses that delve into almost every industry imaginable; including health, power generation and energy, finance, banking, oil and gas, IT and media to name a few.

A true family affair, the empire is run by four brothers across five separate continents. The Hinduja headquarters are situated at Haymarket’s New Zealand House in London. The business sees 75,000 employees over 35 different countries. 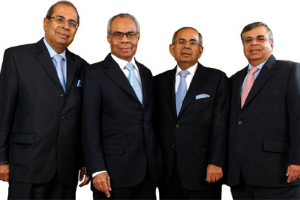 With such expansion and global coverage over the years, the Hinduja family are an example of the extraordinary hard-work and determination of the Asian community wherever they may be.

Founded in 1914, the group are now enjoying their centenary year as the most successful Asian business in the UK.

The group were also awarded Asian Business of the Year for their extraordinary achievements. Chief Guest at the Asian Business Awards, was Michael Gove MP, the Secretary of State for Education. Gove, alongside Ranjan Mathai (India’s High Commissioner). The two together presented the award to Gopichand Hinduja.

Other notable leading names in the Rich List include the steel magnate Lakshmi Mittal who has a net worth of £12 billion. Initially top of the Rich List for a number of years, he was knocked off by the Hinduja brothers in 2013. Anil Agrawal came in third with a wealth of £2.4 billion and Sri Prakash Lohia came in fourth with £2 billion.

Rounding off the top 10 is the NRI industrialist Lord Swraj Paul and Angad Paul who share £750 million.

This year’s wealthiest Asians are:

The Rich List itself sees 101 Asians in total, who have all reached millionaire status, with 9 billionaires. The accumulative wealth of these 101 notables amounts to almost £52 billion – which is £6 billion higher than 2013.

The List was published under the Asian Media and Marketing Group (AMG) via the popular publication Eastern Eye. From AMG, Shailesh Solanki said: “The list shows the remarkable strength and diversity of Asian businesses in the UK.

“Despite the challenges of the general economy many business leaders in the community have seen opportunity and potential and moved quickly to capitalise. It is an inspiring picture and one that should energise entrepreneurs everywhere.”

Organisers also added: “The event is a celebration of Asian business excellence, acumen and achievement, with Asian business leaders mixing with powerful policymakers, business trendsetters and celebrities. Asians have come a long way from the stereotypical corner-shop owners.”

Judges in the panel for this year included the editors from the AMG as well as a panel of industry experts.

With Asians making up some of the wealthiest tycoons in the UK today, it is clear that their presence in restarting the economy is vital for the future of Britain.

Colour, race and creed are not factors for success – this list is evidence of that. And we are certain that the 101 businesses mentioned in the list are apt and necessary role models of future generations to dream big and achieve much.